Mike Judge Tried to Warn Us

Monday is Memorial Day. Because we're now underway in a long holiday weekend, you may have time to rent a movie or two. Maybe see a movie that you missed when it was released theatrically. Well, in the case of IDIOCRACY, millions of moviegoers missed it. This futuristic comedy satire came from director and co-writer Mike Judge, For TV, Judge created the animated shows BEAVIS AND BUTTHEAD, aired on MTV, and KING OF THE HILL, aired on Fox. In 2006, I started two surreal years in my broadcast career. Although she did not publicize it much, Whoopi Goldberg had her own national weekday morning radio show out of New York City. Whoopi, back in 1988, was one of my first guests on my VH1 talk show. She wanted someone in her on-air team who could review new films, new TV shows and be knowledgeable enough to talk about classic movies. Fortunately for me, Whoopi remembered me from VH1 and she arranged for my on-air audition. I got the job. I heard about IDIOCRACY and wanted to see it. Then I heard that major U.S. businesses like Costco and Starbucks were so peeved at the way they were portrayed 500 years into the future that 20th Century Fox basically shelved the movie. It went to DVD.  Luke Wilson played the somewhat clueless Army corporal selected for a secret military experiment involving suspended animation. This corporal is selected because he is somewhat clueless. The Army needed an individual who was "most average." Since no female Army soldier was dumb enough to get into that contraption and go along with this experiment, a prostitute was hired. Her name is Rita and she was played by the fabulous Maya Rudolph. 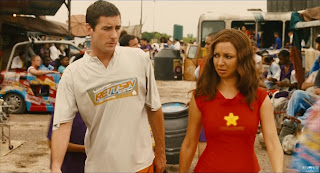 Rita is just about the most conservatively dressed hooker you've ever seen in a film. She's practically wearing culottes. Terry Crews stars as the former national sports TV celebrity who's now President of the United States. 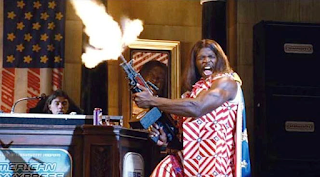 There's a glitch in the experiment. Joe, the Army corporal, and Rita, the hooker, wind up 500 years in the future. America has changed. Or has it? See IDIOCRACY. That future is now. Here's a trailer. The comedy runs 85 minutes.

I repeat: Mike Judge tried to warn us. Here's a clip.