As expected, Renée Zellweger is in the Best Actress Oscar race for portraying the latter-day Judy Garland in JUDY. She does her own singing as Judy Garland. She plays the performer during what were the last six months of her life. She was 46, newly married again, and had been booked to perform dates at a posh nightclub in London. She needed the money. The year was 1969. I know that critics raved about Zellweger's performance. Recently, she won a Golden Globe in the Best Actress category for her biopic work. However, to me -- and I don't mean this harshly -- she looked more like a 1950s Polly Bergen in CAPE FEAR: THE MUSICAL. 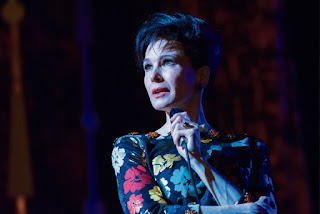 Zellweger did give it her all. She worked her trademark squint for all its worth.

Now, I just want you to see something else. Back in the 1990s, I interviewed Judy Garland's daughter, Lorna Luft, on live TV. Lorna had written a good biography about her youth with her famous mother and famous father, Sid Luft. Luft was the executive producer of Garland's sensational Hollywood comeback film, the 1954 musical remake of A STAR IS BORN. She was the favorite to win the Best Actress Oscar for it. She lost to Grace Kelly for THE COUNTRY GIRL, a now legendary Oscar upset. Sid Luft managed her through some of her best major concert dates here and abroad. He was the third of her five husbands. At the time I interviewed Lorna, it was announced that she'd produce a miniseries biopic based on her book for ABC TV. 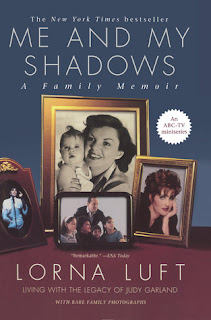 The big question was -- who would play her mom? She found the right person -- actress Judy Davis. Davis played Garland from her meeting with director Vincente Minnelli (future 2nd husband and father of Liza) to discuss MEET ME IN ST. LOUIS through to her 4th marriage in the 1960s. The reviews were more like love letters. I was a guest on a local morning radio show the day after it aired. Davis was so phenomenal that the straight guys who hosted the show were talking about her. They'd watched it too.

After a now-historic concert success at Carnegie Hall and an Oscar nomination for her dramatic role in JUDGMENT AT NUREMBERG, Garland signed a big money contract with CBS in Hollywood for her own Sunday night weekly variety show. Among her many fans was President John F. "Jack" Kennedy. She'd visited him at the White House. Norman Jewison was on the production team. Years later, the director highly praised her talent, saying that she was whip-smart and took a keen interest in every aspect of the production. However, the network guys never treated her with the respect she deserved. Plus, the two men who were her managers embezzled millions from her contract and paid her what should have been their commission. One of them, David Begelman, would go on to make entertainment news headlines with an embezzlement and check forging scandal in the 1970s. Judy Garland was an international show biz legend dealing with the male executive branch at CBS. Here's an example of why I feel that Judy Davis' Emmy-winning 2001 performance is still the topper:

That's from one of the best TV biopics I've ever seen. Garland was played by two actresses. Tammy Blanchard played teen Judy, a new contract player at MGM. (Blanchard's resemblance was uncanny). Then Davis entered as young adult Judy, now a top star on the MGM lot. If you've never seen LIFE WITH JUDY GARLAND: ME AND MY SHADOWS, find it and give it a look. Here's a color photo of Garland at a gala event with President Kennedy and a black and white photo of her next to President Kennedy at the White House with Carol Burnett and Danny Kaye. 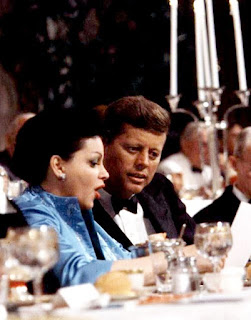 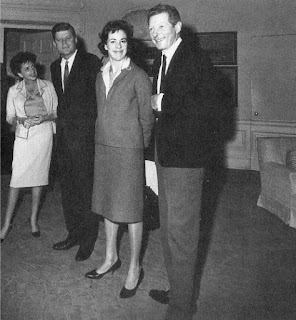 Trivia: Alison Pill played young Lorna Luft in the biopic. She and Judy Davis would play daughter and mother again in the 2012 Woody Allen comedy, TO ROME WITH LOVE.  Here's Judy Garland singing "The Man That Got Away" in 1954's A STAR IS BORN. She and the song brought Oscar nominations to the film.