This new movie is about fighting hopelessness -- the hopelessness that is the enemy of justice. It's based on a true story that started in the late 1980s in Alabama. JUST MERCY is based on the New York Times bestseller of the same name by Bryan Stevenson. Today, Mr. Stevenson gets to see himself portrayed on the big screen by Michael B. Jordan. Not a bad bit of casting at all. In fact, I read that Stevenson told the actor, "Don't try to look exactly like me. Keep your BLACK PANTHER body." If you want to go out and see a good movie this weekend, consider seeing JUST MERCY. It is definitely worth the price of the ticket.

Jamie Foxx stars as the innocent man on death row. He was accused and convicted of murdering a young white woman. He was placed on death row before had a trial. We have seen this kind of a prison and courtroom drama before with someone unjustly accused of a crime and a newcomer to the legal profession taking of the tough task of making sure that justice is served. But this story gives you a different vibe. Instead of telling you that the system is broken, which you already know, it tells you that the system isn't broken. It's rigged that way on purpose to break certain groups of people. One such person from an outcast group is Walter McMillan played by Jamie Foxx. 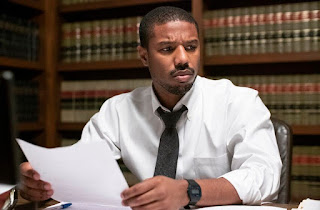 Stevenson is a Harvard law graduate in Alabama to help fight for the poor who cannot afford proper and reliable legal representation. His mother worries about him being in Alabama where inequality seems to breed. Stevenson, a lawyer, is forced to submit to a strip search before seeing a client. He looks into the case of McMillan and is struck by the sloppy evidence. He meets with the hopeless McMillan. Then he meets with McMillan's wife, other family members and family friends who all gather in her house. The wife knows in her soul her husband did not murder that girl. He had a brief affair with a white woman and you can imagine how news of that went over in Alabama. When Stevenson asks why she still defends her husband, she replies "He's the father of our children" and she knows he's innocent. It turns out that McMillan was doing something else in another part of town when the crime was committed. Stevenson asks the group in the house if anyone can place McMillan at his activity at that time. About a dozen black witnesses raise their hands. Now we're really interested. 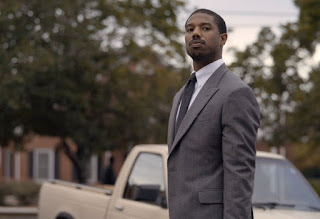 JUST MERCY reminded me of a time I did jury duty on a long, complicated court case in New York City. When one of the lawyers came into the jury room to address us, he said, "You've all seen the statue of Lady Justice. Please remember that Justice is blind."

He left and the woman sitting right next to me sighed, "Wow."  She was Puerto Rican from the Bronx, as she later told me. She explained why she sighed, "Wow."

"I never noticed that she was blind," she said. "All I noticed was that the scales weren't level." 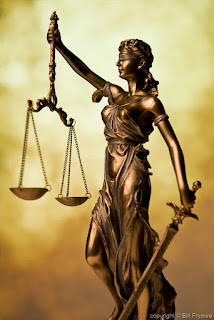 That court case was in the late 1990s. I never forgot my fellow juror and what she said. Here's a trailer for JUST MERCY:

Jamie Foxx was a guest on GOOD MORNING AMERICA to promote this film and his appearance made me want to see it.  Foxx is a star. Like Tom Hanks, Sally Field and Robin Williams, he's one of those actors who graduated from TV sitcom work to winning an Oscar for a dramatic performance. He could've easily spent the time talking about his career and new movie. However, he graciously and generously chose to praise the acting talent and commitment of his co-star, Michael B. Jordan.  Foxx was right. Jordan, one of the film's producers, gives a passionate and nuanced performance.

As for Jamie Foxx, this is one of his best performances since his Best Actor Oscar-winning turn as Ray Charles in 2004's RAY. Brie Larson plays Stevenson's legal defense partner. There's a gripping performance by an actor named Rob Morgan as the death row prisoner, Herb. Herb is a Vietnam veteran with a severe case of Post-Traumatic Stress Disorder. His PTSD was never brought up in his trial. There's a fragility about this poor man. Justice did not serve Herb. The scene of his execution as Ella Fitzgerald's recording of "That Old Rugged Cross" plays in the background is powerful and heartbreaking. A memorable scene. 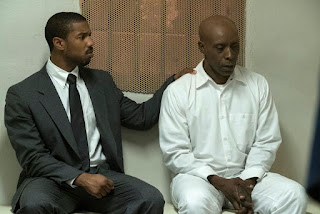 JUST MERCY runs about 2 hours 10 minutes. I recommend it.