"Law and order!" That's what he believes in -- and he believes in attaining it "without guns." This post is about a James Stewart classic that does not get as much mention as THE SHOP AROUND THE CORNER, MR. SMITH GOES TO WASHINGTON, THE PHILADELPHIA STORY, IT'S A WONDERFUL LIFE, REAR WINDOW and VERTIGO nowadays. But it should. Jimmy Stewart hits a bullseye in it. The 1939 comedy/drama western is DESTRY RIDES AGAIN. His leading lady is Marlene Dietrich. 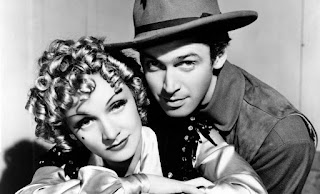 I know that Stewart and Dietrich reteamed in 1951 for NO HIGHWAY IN THE SKY. However, if I had a revival theater, I'd put this western on a double bill with MR. SMITH GOES TO WASHINGTON. Deputy Tom Destry and Senator Jefferson Smith have major elements in common. Both men are trying to do the right thing as a public servant. Both are new to their jobs.  Both have to deal with a corrupt politician. Both young men had fathers who were shot in the back and killed. Both Tom Destry and Senator Jefferson Smith are looked up to by an impressionable little boy.

This is the classic movie that rejuvenated Marlene Dietrich's career. Moviegoers got a little tired of her being an alluring, exotic, elegantly-attired European vamp as she had been throughout the 1930s. Times and styles were changing. She's a con artist saloon singer in DESTRY RIDES AGAIN, very popular with the rowdy men of Bottleneck. That's the name of the wild west town. In the first half hour of the film, Dietrich sings a song and then has a knock-down, drag out fight with one of the town's wives. Frenchy, the saloon singer, conned the woman's husband out of his pants. This hair-pulling, messy brawl covers quite a bit of floor space in the saloon as the men cheer. When Deputy Destry comes in and puts an end to the fight by dousing both women with a bucket of water, Dietrich ended her box office popularity drought. That brawl was a memorable, All-American movie scene. 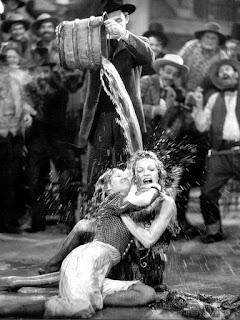 The always-dependable Jack Carson played a member of the Washington, DC press corps in Frank Capra's MR. SMITH  GOES TO WASHINGTON (1939). He's one of the guys who hips the young junior senator to the shady deals that are being pulled. In DESTRY RIDES AGAIN, he's the hothead seated next to Destry when his stagecoach arrives in town. Bottleneck's crooked mayor and his cronies have just appointed the town drunk as the new sheriff. The amiable drunk knows he's useless so he brings in Tom Destry to be his deputy. Tall, lanky, mild-mannered Tom Destry has a habit of telling a very short story to make a point. Each little tale is like a fable with a moral. He doesn't carry guns. He doesn't believe in it -- especially considering what happened to his father. But this doesn't mean he can't use a gun or handle himself in a fight. The hothead who rode into town with him refers to him as a "lady-fingered deputy" because of his non-aggressive manner. Frenchy also thinks Destry will be a pushover and no threat to the crooks who keep money in her pocket. We'll see that Destry is a sharpshooter. And when one man works his last good nerve, Destry hauls off and punches the pores off that man's face.  In DESTRY RIDES AGAIN, Dietrich introduces a second song that became one of her signature tunes in her celebrated stage shows -- "See What the Boys in the Back Room Will Have." Here's a trailer.
Bottleneck needs to be tamed. We know Destry can tame it. Watch how he slyly sizes up the men and the situation in the saloon soon after he arrives to begin his duties. He knows what they're thinking and he knows what they're not thinking. Destry will tame Bottleneck -- and hot-tempered Frenchy. 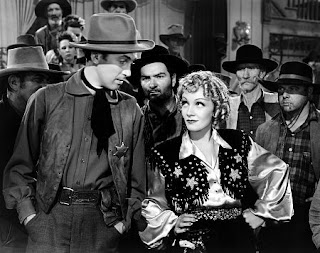 There's a lot of gunplay in DESTRY RIDES AGAIN -- from men and women. George Marshall directed 1939's DESTRY RIDES AGAIN. Compare it George Stevens' 1953 classic western drama, SHANE. Jean Arthur played the frontier wife who says "We'd all be much better off if there wasn't a single gun left in this valley -- including yours." 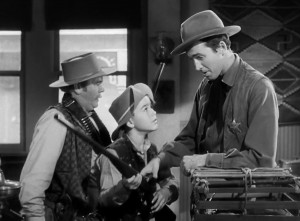 In DESTRY RIDES AGAIN, when bad guy Kent (played with sexy smoothness by Brian Donlevy) and his henchman try to take over a homestead by shooting at its residents to force them off the property, the frontier housewife/mother grabs a rifle and starts shooting back. In the sheriff's office. there's a little boy who has taken to Destry and looks up to him. He's also fascinated with guns and wants to shoot like most of the men in town do. Notice that he picks up and holds a rifle as he talks to Destry. Notice how deftly Destry removes the rifle from the kid's hands as he casually converses. In the final scene of the film, notice how that same kid now emulates his role model, Tom Destry.  "Law and order," maintaining law and order "without guns" and not taking the law into one's own hands. That's what Deputy Tom Destry stands for in this western, a western that has laughs and substance. Destry changes the gun culture in Bottleneck. He only uses his guns when he has to protect innocent people in a crisis. This Universal Pictures release was released in December 1939, two months after Columbia's MR. SMITH GOES TO WASHINGTON. 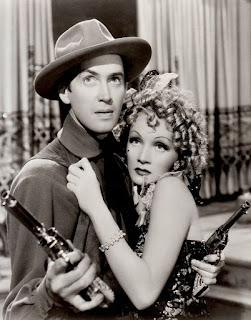 If you see DESTRY RIDES AGAIN, Mel Brooks' BLAZING SADDLES will be even funnier. Madeline Kahn's character is a send-up of the Marlene Dietrich saloon vamp. Kahn obvioulsy studied the "source material" before giving us that fabulous lampoon of Frenchy. Madeline Kahn was a brilliant screen comedy actress. DESTRY RIDES AGAIN, lively entertainment that boasts Jimmy Stewart and Marlene Dietrich at their best, gets the prestigious Criterion Collection treatment this April.