I watched the Golden Globes awards show on NBC last night. I have a hunch that this year's film awards season will be a major traffic jam. Early next week, the Oscar nominations are announced. Then the Screen Actors Guild Awards come up later this month. The Super Bowl airs on Sunday, February 2nd. Then the Oscars -- which some call "The Gay Super Bowl" -- air the following Sunday, Feb. 9th. For some reason, the Oscars telecast has been pushed way up on the schedule this year. Does that give voters enough time to see the nominated works and make well-informed choices?  Last night, 1917 won a Best Picture Golden Globe. Directed and co-written by Sam Mendes, it's about carrying out orders in the midst of the horror known as World War 1. There are no stars in the lead roles. We follow two British soldiers. They receive a grueling task to carry out. It's a race against time order that involves them having to cross into enemy territory. They must deliver a message to a commanding officer. The message could save the lives of 1600 soldiers. There is plenty of action in this film. 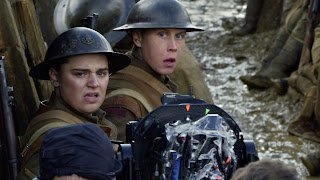 1917 is based partially on stories Sam Mendes heard from his WWI veteran grandfather.

Some other films directed by Mendes are AMERICAN BEAUTY, ROAD TO PERDITION, JARHEAD, plus the James Bond adventures SKYFALL and SPECTRE.

I did gasp at some of the perilous activity of the two valiant, young soldiers. I was in awe of some of the stunning visuals. Technically, it's marvelous. The acting was good. As for 1917 as a whole, let me put it to you like this: Remember back in the 1980s when having nouvelle cuisine in trendy, new restaurants was the thing? The chefs were personalities. The presentation was like performance art. The plates were larger than the ones in your kitchen at home. In the restaurant, you'd get these big, fancy plates with little-bitty portions of gourmet food. It was all very posh. You felt oh, so sophisticated. However, on the way home, you were definitely stopping at the nearby pizza joint to grab a couple o' slices or a whole pie -- because you were still friggin' hungry. That's 1917 from director Sam Mendes. It's a big, fancy plate with little-bitty portions of gourmet food that leave you still hungry. It looks excellent, but there's really not much to fill you up. The film doesn't have much of a story and, for that matter, much of a soul. It's quite different from JARHEAD, his much better 2005 film about a bookworm U.S. Marine sniper who wants to shoot and kill in the Gulf War and then must check that lethal desire.

Did you see the Stanley Kubrick classic from 1957, PATHS OF GLORY? It too is a World War 1 drama. Kirk Douglas starred as the moral center of that wartime drama. Kubrick gives us memorable tracking shots in PATHS OF GLORY. You'll see a bit of one in this trailer. Click onto the link:


1917 seems to be based on the stories from the director's grandfather and the Stanley Kubrick tracking shots in PATHS OF GLORY. Mostly the tracking shots. Click onto the link and watch the trailer:

When the film ended, instead of absorbing the emotional journey the characters had just taken me on, instead of thinking about the message of the film, I was wondering "Wow. How did Mendes do all those tracking shots?"

For a more complex, more emotionally fulfilling film about the horrors of World War 1 and the madness of treating war like an all-male sporting event, see Kubrick's PATHS OF GLORY (1957) and ALL QUIET ON THE WESTERN FRONT (1930), another great film. Directed by Lewis Milestone, he won the Oscar for Best Director. The film won the Oscar for Best Picture. There's also the exciting Hollywood film from the silent screen era, WINGS. The 1927 movie also follows characters into World War I. The aerial sequences and other camerawork are terrific. Director William Wellman gave moviegoers some very mature images. There's brief on-screen nudity, a man-to-man kiss in wartime and two openly affectionate lesbians are at a table in a café scene. WINGS was the first film to win the Oscar for Best Picture.
at January 06, 2020