The hit man Robert De Niro plays in Martin Scorsese's THE IRISHMAN says, "You don't know how fast time goes by until you get there." That is so painfully true. Think about it. We're in the first month of 2020. Twenty years ago, we didn't have cell phones and social media. We used rotary phones. We left messages on answering machines. We mailed letters and Christmas cards. We didn't have gay marriage equality. We'd never had a black president of the United States. We purchased newspapers just about every day. Men didn't use their phones to take photos of their own genitalia. That all came into our lives in the last 20 years. Didn't those years pass quickly? I watched THE IRISHMAN last night. The movie runs 3 hours and 30 minutes. Wow. What a movie. Those hours whizzed by like the bullets shot out of the hitman's gun.

It's a crime story. We go back to the 1950s. There are mob hits a plenty. De Niro plays a killer. I know that a few folks on social media remarked, "Gee...gangsters in another crime story. What a stretch for Martin Scorsese." Yes, he has given us crime, murder and men beating the crap out of somebody in TAXI DRIVER, GOODFELLAS, CASINO, GANGS OF NEW YORK and THE DEPARTED. But the crime scene for Scorsese is what the western was for John Ford. It's the genre where his vision and message have taken root and grown more than any other. A few months ago, a buddy of mine commented that actor Joe Pesci, coaxed out of retirement by Scorsese, was terrific in the movie. I second that emotion. Pesci gives his performance sort a cool jazz beat. He plays Russell Bufalino, the crime figure who mentors Frank Sheeran (De Niro) in the world of organized crime. As time and crime go by, Sheeran will become friends with labor leader Jimmy Hoffa (Al Pacino). 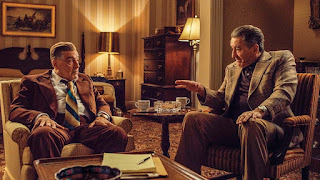 I wrote that Joe Pesci gives his understated performance sort of a cool jazz beat. If THE IRISHMAN was a record, it would be a jazz blues album. The film takes on a melancholy, a tone of the blues. Aging is not kind. Sometimes the thing that betrays you the most is your own body has it gets older. As you get older, you are forced to consider what your words and deeds have brought into your life -- and what they've taken away.

Director Martin Scorsese's THE IRISHMAN has De Niro, Pesci, Pacino and Harvey Keitel. They are all in top form. There were times when Al Pacino as Jimmy Hoffa reminded me of Al Pacino as Big Boy Caprice in 1990's comic strip-inspired DICK TRACY.

THE IRISHMAN is on Netflix. It's in the Oscar race for Best Picture and Best Director. Joe Pesci and Al Pacino are both the Best Supporting Actor Oscar category. Yes, it's a long movie -- a long movie that I will definitely be watching again. THE IRISHMAN is already a Scorsese classic.
at January 17, 2020