I remember the news stories that covered Bay Area protests over the death of 22-year old Oscar Grant. Grant's story, up to and including his death when he and his girlfriend were on their way to New Year's Eve festivities in San Francisco, is covered in the 2013 independent film, FRUITVALE STATION. I also remember the large movie posters full of rave reviews from top film critics. The movie starred a big screen newcomer named Michael B. Jordan as Oscar Grant and recent Best Supporting Actress Oscar winner Octavia Spencer as his mother. Jordan today is a popular new star who'd be sought for comments on a red carpet by entertainment press. He deserves the spotlight. The young man is a very good actor. He's serious about his craft. 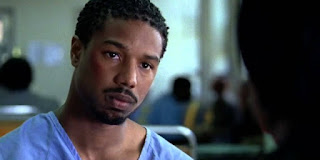 Fortunately, the blockbuster domestic and overseas box office success of the 2018 action adventure/fantasy BLACK PANTHER widened awareness of his talents. 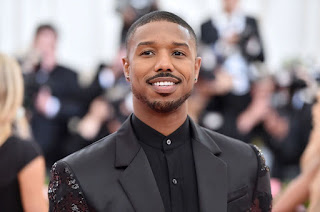 For me, experiencing the impact of a film with fellow members of a paid audience have often been as thrilling, as memorable as the film itself. This goes from my nights of sitting in the back seat of the family car when the Rivers Family attended a double-feature at the drive-in during my Los Angeles youth to sitting in a movie theater audience in Hollywood or New York City. I had an experience like that in San Francisco in 2013. I was in San Francisco, apartment-sitting for a friend. I went to see FRUITVALE STATION one afternoon. As I wrote, I was familiar with the news story. I was unfamiliar with Michael B. Jordan. I was drawn to the movie by the excellent reviews. 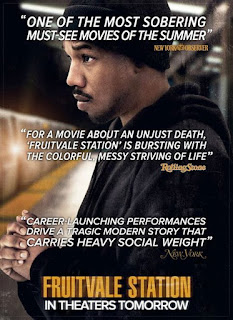 I was seated in the cineplex theater. In walked a group of five giggling white girls of about college age. In the middle of my quiet prayer that they not sit near me, the sat in the row right in front of me. My revised prayer was that they would not be giggling and chatty during the movie.  At the end of the movie, they were sniffling and crying. I was sniffling and crying. We all looked at each other as we left the theater, moved deeply by the film that held our attention for 90 minutes. There we were, strangers bonded together by the power of good film and bonded by seeing a story that really happened where we were -- in the modern-day Bay Area. Now that Michael B. Jordan is one of our new stars, folks should revisit FRUITVALE STATION. Here's a trailer. Click onto the link:


I left the theater feeling that Octavia Spencer deserved a second Oscar nomination for Best Supporting Actress. To me, she was even better as the mother in FRUITVALE STATION than she was as a maid in THE HELP. In the opening scene of the film, there's visual information that tells you the basic thing you need to know about Oscar Grant's character. Look at the way he treats a needy animal. Grant has done time. He's now determined to turn his life towards the light, be a better son, a better dad and a better partner to his girlfriend, Sophina. Click onto the link to see a clip. There's strong language in it:

In a flashback scene, we see incarcerated Oscar Grant get a visit from his mother.  Click onto the link to see the clip featuring Michael B. Jordan and Octavia Spencer:

FRUITVALE STATION and BLACK PANTHER were both directed by Ryan Coogler. FRUITVALE STATION was hailed at the prestigious Cannes Film Festival and highly praised by American film critics. However, come Oscar nomination time, it was totally -- and surprisingly -- overlooked. I believe the Academy's lack of attention to FRUITVALE STATION was an element that sparked the discussion of diversity in Oscars consideration. The movie is worth a look. 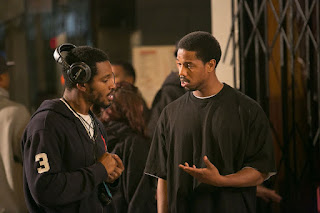