The Majesty of Prince

NPR (National Public Radio) had a weekly Code Switch team and podcast.  It's a race and culture outlet heard on weekday NPR in the mornings.  OK, let's just real here.  Code Switch is like a radio Rosetta Stone for white NPR listeners.  It hips them to what black people are talking about and the new words we use while talking about it.  Code Switch is needed.  Have you ever heard "This American Life" hosted by Ira Glass?  That show is whiter than mayonnaise.  If he wrote porn, it would open like this:  "She was naked on the bed with her knees up as if waiting for a gynecological exam.  He looked at her.  He was reminded of sections in Judy Chicago's The Dinner Party at the Brooklyn Museum.  He too was naked.  And oh, so tumescent."   I do listen to NPR and it does cry out for some urban flavor.  Back in April, Code Switch had a feature called "Everybody Has A Prince Story (Or Should).  Here Are Ours." My little story happened in the late 1980s during my years as a daily VH1 veejay and weeknight celebrity talk show host.  The Grammys were held in New York at Radio City and I was given two tickets.  And I had to rent a tux because it was formal.

Prince performed in the show.  Need I tell you that he was extraordinary and commanded the stage with his musical majesty? 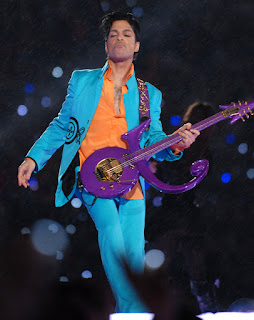 I believe the awards show had ended and folks were filing out to head to after-parties.  I had to use the restroom.  I entered the restroom and it looked like a Vanity Fair photo opportunity.  It was an attractive men's room and the color scheme for all us gents in it was black and white.  At each urinal stood a man we saw in a tuxedo with his back to us.  Other men waiting in line were also in tuxedos.

The tone in the large, clean Radio City men's room was respectable.  There were comments are the brilliance of the performances and remarks about the stars.  No one was loud.  All of a sudden, the men's room door forcefully opened -- like saloon doors being pushed open by a young, upstart gunslinger in an old movie western.  Prince entered.  He was all in purple.  Hooded purple.  With a matching cape.  It certainly pulled focus from all the black and white of our tuxedos.  The design of his outfit was very similar to the outfit young Katharine Hepburn wore in the 1933 movie, CHRISTOPHER STRONG.

Prince strutted into the men's room with a serious expression, looked around and sort of cased the joint.  Like a young, upstart gunslinger in an old movie western.  A gunslinger wearing a purple outfit with a hood and a cape.  And Prince wasn't exactly tall.  However, his charisma sucked up all the oxygen in the men's room for a moment.  I was standing next to sportscaster Ahmad Rashad.  Both our eyes were fixed on him.  We'd gone slack-jawed as we waited to see what his next move would be.  In fact, all eyes in the men's room were on him.  He was Prince.  A music star of mega-wattage.

Well...he dramatically turned and exited, flanked by tuxedo-wearing bodyguards, it seemed.  The cape fluttered a bit with his whip-fast turn. He was not about to stand in a line and wait for an available urinal.  Although the sight of tux, tux, tux, purple cape and hood, tux, tux, tux would have been fabulous.

Only Prince could strut into a New York City men's room dressed like he was about to be shot out of a circus cannon and make the all-male crowd go just about speechless in awe.  He was just too much for mere mortals.  I was so lucky to be standing near that men's room door. 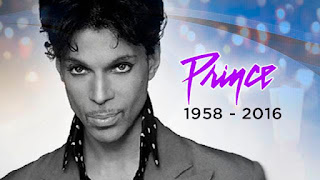