How to SCORE in Hollywood

When I'm able to on Fridays, I treat my ears and mind to a weekly film review hour that streams on news station KPCC out of Southern California.  It's the 11am FilmWeek hour that airs during the weekday AirTalk show hosted by Larry Mantle.  That's 11am Pacific time.  On Fridays, Larry is host to a couple or a trio of film critics who deliver passionate, informed and non-snarky movie reviews -- reviews of big Hollywood, small indie and foreign films.  The show is a treat for us film lovers.  Not only that, Larry's show opens a door that, sadly, network TV news and syndicated entertainment programs failed to do for decades.  He presents race and gender diversity in his selection of critics.  I love this show.  Recently, critics were very enthusiastic about a documentary called SCORE.  To me, a great score can be a movie's best friend.  The score itself can be a work of film art.  One of my favorites is the score to a classic many of us watched annually on TV as a prime time network TV special.  1939's THE WIZARD OF OZ has a outstanding score starting with the overture for the opening credits.  It's grand, it has sweep and it gives you a sense of wonder.

Then there's all the original, clever songs written for it.  We have the wistful "Over the Rainbow" that became Judy Garland's signature tune for the rest of her career and life plus the witty songs written for Scarecrow, Tin Man and Lion.  Watch that classic again and listen to how remarkable an original score it has -- and how lushly it's arranged and orchestrated.  THE WIZARD OF OZ has music by Harold Arlen and lyrics by "Yip" Harburg.  The music score was by Herbert Stothart.
Another great score can be heard in the Alfred Hitchcock masterpiece, PSYCHO.  The high-pitched staccato strings in the Bernard Herrmann score give you a sense of attack and madness.  They also sound like the crazed shrieks of birds. 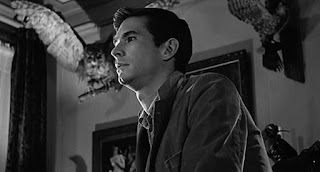 Think of the birds demented Norman Bates has stuffed and mounted in his room.  What a brilliant score.  As for what I wrote about the fact that a great score can be movie's best friend...think about the theme to JAWS. 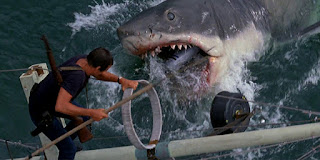 Those few, low, ominous notes from John Williams and the aquatic quality to his orchestration ...so memorable.  That score was just the thing that Steven Spielberg's film needed.

SCORE, the new documentary, shows us the modern-day work that goes into creating movie music.  Take a look at the trailer.

In the 1990s, not long after TITANIC had become a surprise box office blockbuster, there was a special re-release of the 1939 movie classic, GONE WITH THE WIND.  Now there's another famous film score.  I had a date. I asked him out to see a GONE WITH THE WIND showing in New York City.  He was up for it.  He'd never seen the movie.  I'd seen it several times but was eager to see this remastered edition on a big screen with the overture, intermission music and exit music.  I did not expect the theater to be packed, but it was.  And not just with older folks.  This was a theater full of film lovers.  There was huge applause when Scarlett delivers the final line and the Max Steiner music swells up.  The audience even stayed seated through the exit music. 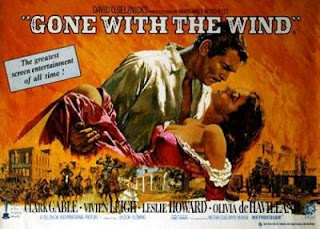 I mentioned that to my date as we merged into the crowd and walked up the aisle to the door.  I was so thrilled that folks stayed for the exit music.

He replied, "Yeah!  That was something.  And there was hardly any music in the whole movie."  He wasn't kidding.  He made his casual remark quite seriously.

That was our second date.  And our last.