Pride of THE BABADOOK

I was reviewing movies on cable's Arise TV channel in 2014.  Three of the best films I saw that year were independent films directed by women.  There was LITTLE ACCIDENTS directed and written by Sara Colangelo.  I had associated actress Elizabeth Banks solely with TV sitcoms until I saw her dramatic work in LITTLE ACCIDENTS.  There's a major coal mining accident in a small American town.  Then the disappearance of a teen boy brings together the only miner who survived the disaster and Elizabeth Banks as the wife of a wealthy coal mine executive.  It's a good drama.  I loved the terrific and highly original feminist vampire movie, A GIRL WALKS HOME ALONE AT NIGHT.  Just because there's a love story in this black and white thriller don't think it lacks chills.  She's a ruthless vampire in Iran.  The story is set in Iran but the film was shot 30 miles outside Bakersfield, California.  Directed and written by Ana Lily Amipour, A GIRL WALKS HOME ALONE AT NIGHT has wit and it's funnier if you've seen Universal's 1931 classic, DRACULA, starring Bela Lugosi and directed by Tod Browning.  Jennifer Kent directed THE BABADOOK, another 2014 film that I loved. 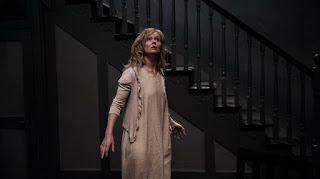 William Friedkin, director of THE EXORCIST, took to Twitter and wrote a rave tweet about THE BABADOOK.  I saw this goose bumps-raising thriller and absolutely agreed with him.  There's a widow, still grief-stricken at the death of her husband, and their timid little boy who believes a monster may be under the bed after she reads him the story of...THE BABADOOK. 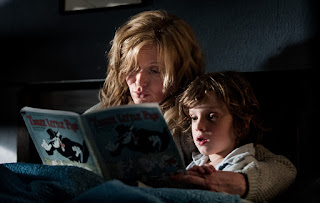 Did reading this story release a boogie man force into the house as the mother's grief skids into paranoia?  The little boy's suddenly erratic behavior makes him seem possessed.  Strange things are happening in the basement.

Is this all the work of...THE BABADOOK? 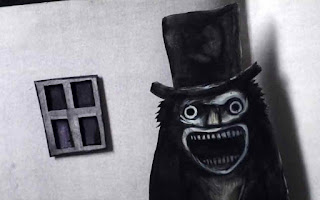 For the answer, you must find and watch Jennifer Kent's THE BABADOOK.  In fact, I highly recommend that you do watch this Australian thriller she directed and wrote.  It's excellent.  In an odd happening of our modern day, the scary looking character in the top hat is very popular this Gay Pride Month.  In fact, The Bababook has become an LGBT icon according to Jessica Roy in The Los Angeles Times this weekend.  Being an LGBT icon means that Mr. Babadook had to undergo a bit of a wardrobe makeover. 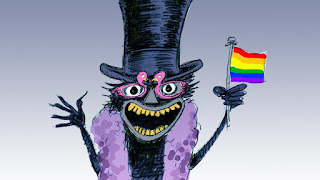 Leave it to my people to make The Babadook look festive for Pride Month.

The film historian in me wanted you to know that Mr. Babadook was inspired by another character and a famous character actor who thrilled moviegoers in the silent screen era.  He was Lon Chaney, called "The Man of a Thousand Faces" because of the array of characters he played in his masterful make-up such as The Hunchback of Notre Dame and The Phantom of the Opera.  Yes, the gifted actor did his own make-up.  One of his features is a lost film directed by Tod Browning, the man who gave us DRACULA and FREAKS in the 1930s.  This 1927 lost film is called LONDON AFTER MIDNIGHT.  There may be a grave robber on the loose.  This sinister looking character may be the grave robber.  Here's Lon Chaney as "The Hypnotist" in stills from 1927's LONDON AFTER MIDNIGHT. 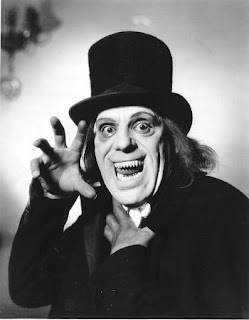