Dear Ariana, Judy Would Be Proud

The power of song.  Words, music, melody.  In the 1930s, this song was written for a 16 year old.  This singer and actress was newly under contract to the powerful MGM Studio in Hollywood.  Judy Garland, the teen talent, would sing "Over the Rainbow" in the 1939 fantasy musical, THE WIZARD OF OZ.  That song, that film performance would fuel her rise to fame.  She'd become one of Hollywood's greatest stars and "Over the Rainbow" would be her signature tune for the rest of her life.  As for the 1939 fantasy musical -- before Ellen Ripley battled the egg-laying monster mother in ALIENS and before WONDER WOMAN there was THE WIZARD OF OZ.  Let me explain.  It's a female-driven action/adventure fantasy.  We follow Dorothy. Dorothy lives in a plain farm house with her aunt and uncle.  Who runs the farms and handles the three farmhands?  Auntie Em does more so than Uncle Henry. Who's the most powerful person in that Kansas town?  The mean old Miss Gulch.  Who are the two top powers in the Land of Oz?  Glinda and Good Witch and The Wicked Witch of the West.  The Wicked Witch would kill to get her hands on the Ruby Slippers worn by Dorothy.  See?  It's a female-driven fantasy...with excellent original music.

Judy Garland's rich, wistful rendition of "Over the Rainbow" touched the hearts and souls of a country that had been economically bruised and battered by the Great Depression. 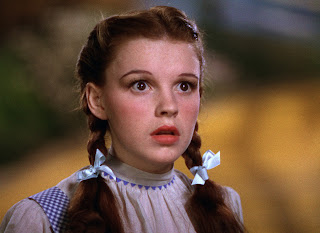 Millions of us in the AARP category grew up being touched by that song when and excited by the action when, as kids, we watched the annual network TV special prime time presentation of THE WIZARD OF OZ. 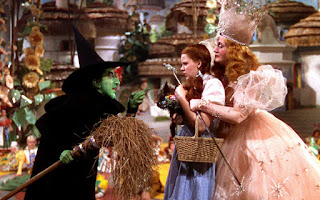 Almost two weeks ago, there was a terror attack in Manchester took 22 lives.  A suicide bomb exploded in the foyer of a Manchester arena after an Ariana Grande concert.  Last Sunday, the 23 year old singer rounded up some A-list pop talent for One Love Manchester, a benefit concert for the terror attack victims. 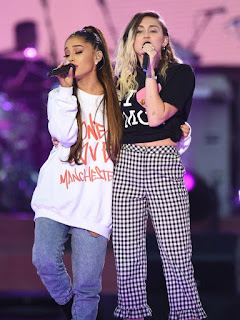 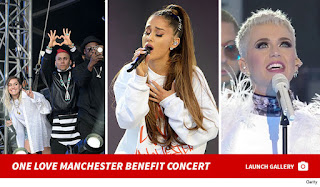 An estimated crowd of 60,000 attended the Old Trafford Cricket ground for the concert.  The singer visited British hospitals after the tragedy. She was praised for the heartfelt, earnest and succcessful fundraiser. 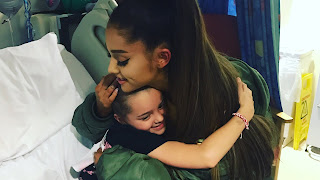 Ariana's final number was an emotional high point for the show.  It wasn't a contemporary pop tune.  It was old song introduced by a teen singer in a fantasy movie musical. "Over the Rainbow" once again touched the hearts of youth, the hearts of many watching it being sung on television.  In the darkness of modern times, the light of this old song still shines through.
Judy Garland would have been so proud.  Brava, Ariana Grande.  Your response to the tragedy was more graceful than our president's.  America thanks you.