My Love to London

Quite a few years have passed since I've been there.  I went to London twice in the late 1980s.  However, the absolute joy of being in London both times is still very special in my hurt.  I loved meeting people and having conversations with them.  I loved the opportunity to work there (my Paul McCartney interview for VH1), I loved sightseeing, book shopping, taking the Underground and there was my sheer glee of being in a city in which I did not feel penalized for practicing common courtesy.  The news over this weekend about another attack in London has broken hearts all over the world.  When I heard the news on TV, it brought tears to my eyes.  I wanted to put up something here, post some kind of item that would send my love to London.  I'll do it with a song, a song introduced by one of my favorite singers -- Petula Clark.  Hers was one of the top pop voices of the 1960s.  New songs were written for her to sing in a 1969 musical remake of the 1939 classic film GOODBYE, MR. CHIPS. 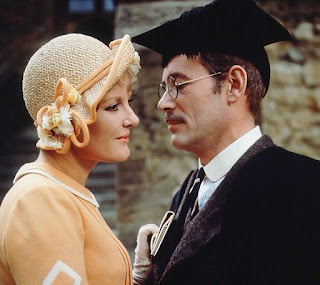 A lot of us American kids back then who were buying her records and watching her on TV variety shows had no idea she'd been making movies in England through the 1940s and 50s.  She had the female lead role in MGM's musical remake opposite Peter O'Toole.  He got one of his several Best Actor Oscar nominations for his performance. 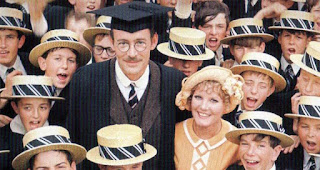 My sister and I saw this film, using our high school student discount cards for a Saturday matinee at the movies.  The critics overall may have given this film a lukewarm reception, but my sister and I loved it.  We were totally entertained and touched.  Petula Clark was not like Greer Garson in the original 1939 version.  In the remake, the woman who falls in love with the shy, lonely schoolmaster is a stage entertainer, a musical hall showgirl.

The musical GOODBYE, MR. CHIPS has a fabulous original score by Leslie Bricusse and John Williams.  Here's one of its songs.  Petula Clark introduces "London Is London."