On Spalding Gray, AND EVERYTHING IS GOING FINE

He was born on June 5th, 1941.  He grew up to become an extremely gifted and moving artist.  In the early 1990s, when New York City friends told me that I should try doing some local stage work, I was heavily influenced by Spalding Gray.  I did a one-man show and some of my performance was at a desk like Gray's SWIMMING TO CAMBODIA piece.  The results in my downtown show were, at best, fair.  I was no Spalding Gray.  His writing and his being himself...well, those were exceptional works.  He was celebrated for being an autobiographical monologist.  The art of his craft was that he had unusual experiences yet managed to find the common thread in them to which we ordinary theatergoers or video watchers could connect.  He found the big picture in the tiny details.  I watched his 1987 SWIMMING TO CAMBODIA several times.  I saw him on Broadway in a revival of OUR TOWN.  He played the Stage Manager.  I was thrilled when we booked him as a guest on my VH1 talk show.  At that time, folks were seeing him in BEACHES starring Bette Midler. 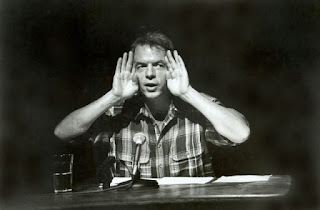 Spalding Gray was a fascinating, forthcoming guest.  Months later, I was walking through Soho in Manhattan.  We were about to pass each other on the sidewalk when he looked over, recognized me and stopped to say "Hello."  He remembered our interview and Spalding Gray complimented me on my work.  I felt like I'd won an award.

Like many others in New York, it broke my heart to hear the news of his untimely death in January 2004.  He was only 62.  It's believed that he committed suicide. 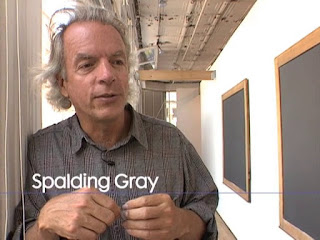 I got a call from Steven Soderbergh's office in 2009.  I thought it was a joke, but it wasn't.  Soderbergh was assembling a documentary on the late Spalding Gray and wanted permission to use part of my 1988 interview in it.  Flattered?  You bet!  I was very honored to get that call, but I had to break that news that I didn't have a copy of my Spalding Gray interview from VH1.

But Spalding Gray did, I was told.  It was found in his belongings after his death.  The documentary would be unique.  Gray would tell his own story in his own words in clips pulled from his interviews.  The 2010 feature is called AND EVERYTHING IS GOING FINE.
Here is the clip that Steven Soderbergh pulled from my interview for his documentary.
I've worked in TV for over 25 years.  I'm not a major TV star but I did rack up years of network TV credits for my resumé.  And don't think that being on TV automatically brings in a big income.  I had two national broadcast jobs between 2000 and 2008 that paid only $500.  A week.  So I always had to hustle up other work.  Because I was never in a big income bracket with any of my network jobs, perhaps that's a reason why I never saw myself as a big celebrity.  I worked hard to take care of myself and to help a few loved ones.

Spalding Gray had a recorded one of my shows on video tape.  I was so touched when I was told that.  I have a family member that I housed, fed and put through parochial school.  And I wrote him a few checks after his college graduation -- all thanks to my TV career.

He has no copies of any of my TV work whatsoever.  But the late Spalding Gray had a copy.  It's surprising who pays attention to you.  Sometimes it's even more surprising who doesn't.

Steven Soderbergh's documentary, AND EVERYTHING IS GOING FINE, can be seen on Amazon Video and at www.filmstruck.com.