He Was in AUNTIE MAME

1958.  Rosalind Russell disrupted notions of how women in their early 50s were perceived when she energetically repeated her Broadway success in the film adaptation of AUNTIE MAME, a hit play based on a best-selling novel.  The movie may have come out in 1958 but, boy, does it ever fill a need today.  This big, colorful comedy about a loving, larger than life family member who embraces cultural diversity, supports the fine arts and shouts down bigotry as she lights up the lives of those around her is just the kind of tonic we need now in this Trumpian Age.  If you've seen AUNTIE MAME, doesn't it feel like the White House has been taken over by Dwight Babcock and the conservative Knickerbocker Bank?  Honestly!  AUNTIE MAME, we need you now more than ever.

Little Patrick, the young nephew sent to his only living relative after his conservative Chicago father dies suddenly in a steam room after working out, is introduced to a new life and new people when he lives with Auntie Mame in Manhattan.  She has a few close longtime friends and two domestic staffers that are all treated by her like dear, extended family.  One such person is tall, handsome, intellectual Acacius Page.  He's the vegetarian, yoga-practicing Greenwich Village instructor who will accept Patrick into his very liberal school, one that is "wholesome and natural."

When narrow-minded Dwight Babcock visits the school, he blows his top when he finds unclad Patrick in class.  As Patrick calmly and honestly explains, the class was playing "fish family."  And, as Acacius Page had taught the boys, "...we were doing what gentlemen fish do."

Acacius Page was played by actor Henry Brandon, a native-born Berliner whose family emigrated to the U.S. when he was still a baby.  He was stage trained and, although he may not have been a big star like a Joel McCrea or William Holden, he worked consistently and was a good character actor.  Recently, I was watching John Ford's classic 1956 western, THE SEARCHERS, on television.  Ever since I first saw this movie on color TV when I was in college, I've always been fascinated by the close-up of the blue-eyed Indian chief villain in the story.  So last month when the movie was on, I made it a point to see who the actor with the big blue eyes was playing "Scar," the Indian chief. 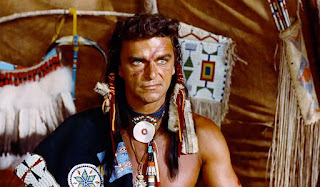 It was Henry Brandon!  All these years, I never realized that Auntie Mame's dear friend was the same guy who played the nemesis in THE SEARCHERS. 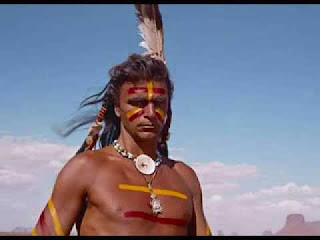 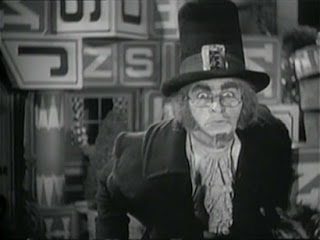 Three characters I've noticed for decades in those three different features and I never realized until last month that all three parts were played by the same actor.  Now that's good character acting.

Brandon died in 1990 at age 77.  He was gay and had a long relationship with the love of his life until his partner passed.  His partner, Mark Herron, had been Judy Garland's fourth husband for a year or two.  He and the screen legend were officially divorced in 1967.  In her autobiography, Lorna Luft, one of Garland's three children, wrote very sweet things about Herron. 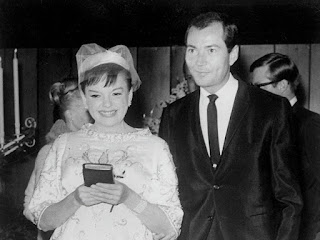 Apparently he was a good man who didn't use or abuse Garland and treated the kids quite well.  Mark Herron died of cancer in 1996.