I watched a recent episode the NBC sitcom, UNDATEABLE, this week.  After my VH1 years in the late 1980s, I wanted to be a supporting player in a good sitcom.  I wanted sitcom auditions.  I still have fantasies of appearing in hit shows as bright as The Mary Tyler Moore Show, The Bob Newhart Show, Cheers, Frasier, Modern Family, Black-ish, Louie on FX  -- and even shows that started off well but got cancelled.  Shows like Better Off Ted, Happy Endings and Suburgatory.  Toss The Mindy Project in there too.  Mindy Kaling's sitcom just got dropped.  (But Hulu may pick it up.)  All those shows, including the cancelled ones, are better than the half-hour episode of Undateable I saw. 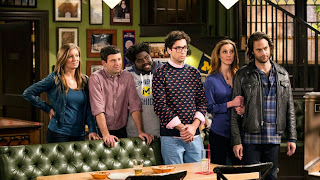 The main character seems the be the bearded, long-haired dude played by Chris D'Elia.  He's wearing the leather jacket in above photo.  D'Elia was the leading man in Whitney, another NBC sitcom.  That one died not a moment too soon. In Undateable, it felt to me as if producers assembled young, mostly slim, 30somethings and prayed for a Friends type of hit.  But here's the thing that irritated me -- the action is set in Detroit.  Detroit.  The home of Motown.  And yet there is only black person in the cast.  And that actor, Ron Funches, didn't have that much to do.  How the heck did that happen? 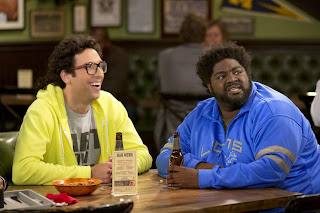 Come on, network executives.  A show set in Detroit and there's only one black person in the cast of regulars?  How many African-Americans, Latinos and Asians are in upper management at NBC?  Are there any present at the casting sessions to keep check on racial diversity?  I lived in downtown Manhattan for many years.  The same downtown where Will & Grace, the couple on Mad About You and all the Friends lived.  In fact, I lived in downtown New York City when all three of those shows premiered.  Manhattan is bursting with people of color but, on sitcoms shot in Southern California, people of color became scarce when it came to casting regulars for sitcoms about life in Manhattan.

The chatty, cute bear cub guy played by David Flynn has recently come out in the show, I hear.  So there's a dab more of diversity on Undateable. 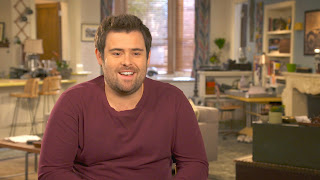 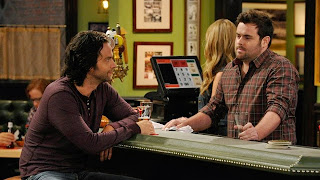 Did you see more than one black person as you scrolled down the home page?

I must confess that I didn't see the entire episode.  I was watching with a friend, watching it on his TV.  Halfway through it, he said "I can't take any more of this."  I agreed with him.  A cast of young actors was burdened with a dull script that tried too hard to be hip.