It's THE JIM GAFFIGAN SHOW

He's the big papa bear-looking guy who does a riff on the Hot Pockets commercial jingle that always breaks me up.  He lives in Brooklyn.  He's a comedian.  His material is clean.  He makes babies.  He's a family man with kids.  And he's my kind o' Catholic. 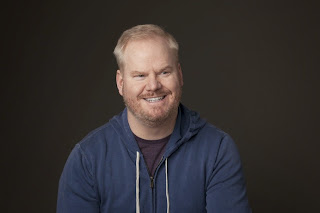 THE JIM GAFFIGAN SHOW premiere episode made me giggle a lot.  There was a couple of big belly laughs.  The theme of the episode was how much a hot topic religion can be.  It may not have left me doubled over with laughter like the premiere episodes of Modern Family and Louie did a few years ago, but it did win me over.  In the first two minutes of the show, we saw what we rarely see represented on network television in prime time.  Black Catholics!  I'm one.  I come from a black Roman Catholic family.  I attended a parochial high school and had black priests as teachers.  But you rarely see us on TV.  In the first three minutes, there's Gaffigan with the black priest in his church.  He stops by the see the priest because Mrs. Gaffigan, his wife, asked him to pick up the heirloom bible that the priest had for her.  Jim really doesn't want to pick up the bible because he's on his way to work -- on his way to a Manhattan comedy club.  He says,  "The church is open at night?  Like Taco Bell?"  He really doesn't want to be lugging around a Holy Bible that weights the same as a pair of newborn twins.  And he doesn't want to take it into a club where the air will be peppered with naughty words.  The next thing you know, he's with Chris Rock (dropping the F-bomb) and pretending the huge book on his lap is a hardcover edition of Moby Dick.

A photo of Gaffigan clutching a Bible winds up in The Huffington Post next to a photo of Miley Cyrus' tongue.  Just the appearance of that photo sends out a certain message.  He gets positive attention.  Even the White House notices him.  The comedian is then offered an enormous amount of money to be a commercial spokesperson for a certain product.  He turns down the money because the company is anti-gay marriage.

That sends out another message.  The TV press takes the story and runs with it -- in all sorts of wrong directions.  Comedy ensues with lots of guest cameo appearances. 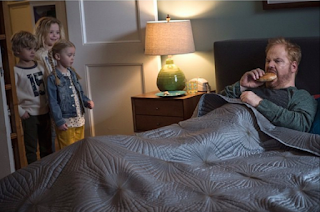 I like Gaffigan's persona.  This was a warm, appealing show and presents his stand-up comedy persona in a comfortable way.  How does Jim get through all this mess of trying to be a liberal Catholic dad and make a good income to take care of his family?  How does he get folks to stop thinking he's a closeted gay man who rejected the Bible?  You can watch the episode and see.  For the rest of this month, it's available for free viewing.  Go here:  JimGaffigan.com. 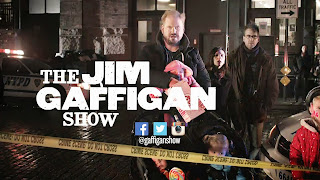 Adam Goldberg co-stars as his bearded Jewish comedian buddy, Dave Marks.  It's a smart move to keep him as a supporting player.  When Goldberg is the lead in a romantic comedy, his hipster act can grate on you.  2 Days in Paris had him as the male lead.  His non-stop NYC brand of neuroses seemed very 1980s and grew tiresome in the 2007 comedy movie co-starring, written and directed by Julie Delpy.  2 Days in New York, Delpy's follow-up starring a subdued Chris Rock, was much smoother and charming.  There's a little of Goldberg in the premiere episode and the little is just the right amount. 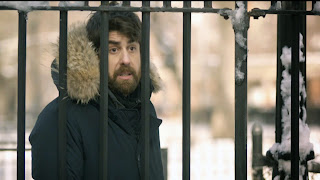 To Goldberg's comedian character, I must say this:  "Bite me, Marks!  Actor Ed Harris is hot!  He's over 50 and hotter than you!" Just look. 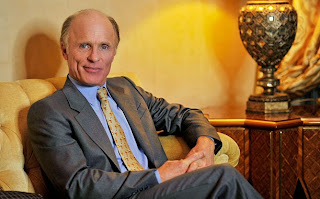 OK.  I got that out of my system.  You'll understand when you see the episode.  Overall, it was an entertaining episode.  Gaffigan's show has a slight retro feel about it.  A sitcom about a married family man entertainer in New York who leaves at night to go work in a club is not new.  Desi Arnaz did it on I Love Lucy and Danny Thomas did it on The Danny Thomas Show both back in the 1950s.   I'm interested to see how this project develops Gaffigan's character.  And it was great to see a black Catholic priest blended into the Catholic family man's life.  I have a feeling this show will have some fresh elements in it, like Gaffigan's laid back, liberal Catholicism.  But it probably won't  be complicated with razor-sharp revealing humor like Louis C.K.'s Louie.  Not right away, anyway.

July 15th is when The Jim Gaffigan Show starts its residency on TV Land.