Jane Fonda, Lily Tomlin, Martin Sheen and Sam Waterston.  Four acting pros having fun on Netflix.  A few nights ago, a dear friend invited me to binge-watch four episodes of the new sitcom, GRACE AND FRANKIE.  What a surprise!  Man, did I enjoy those shows and the performances.  Yes, we focus on four people who are well into their AARP years.  But I saw an episode of NBC's Undateable recently. Oy.  Grace and Frankie felt fresher than NBC's rehash of a Friends-type sitcom with a group of 30-somethings in Detroit.  It's a sitcom set in Detroit and there's only one black person in the cast of regulars.  Are you kidding me, NBC?  Grace and Frankie were certainly fresher and funnier than either of the Kevin Hart movie comedies I had to endure this year for film review purposes.  In this Netflix original production starring two actresses in their 70s, Jane Fonda and Lily Tomlin play rivals who share a beach house in Southern California. 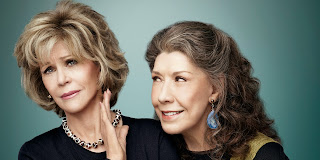 Their husbands have been partners in a law firm for years.  Now they're taking the partnership to a different, intimate level.  One that involves possible marriage.  Yes, their husbands have come out.  The ladies get the news while both couples are at dinner. 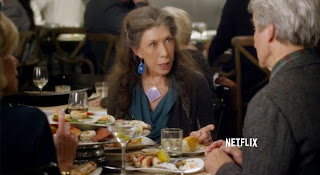 That's not a spoiler.  It's the first five minutes of the premiere episode.  The irony of this tense and funny restaurant scene is that Frankie, a liberal earth mother type who's aghast to hear that her husband is gay and in love with another man, is played by an openly lesbian actress who recently married her partner of 42 years.  Frankie wears shoes that look like they were made by an 8th grade at summer camp.  Sophisticated and image-conscious Grace doesn't take the news very well either.  She's designed her life to be like one long piece of linen -- a material that travels well and doesn't wrinkle.  All four lives are now different.  The women go through feelings of shock, anger and denial. 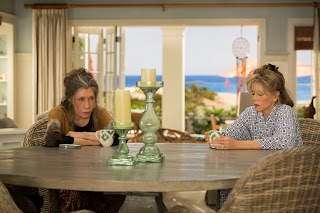 Grace and Frankie must put their rivalry in the closet and share the beach house while their soon-to-be-ex-hubands start a new life together and share a bed.

Here are four actors who were in some of the most significant and well-received films of the 1970s and 80s.  Jane Fonda won Best Actress Oscars for Klute (1971) and Coming Home (1978).  Lily Tomlin was a Best Supporting Actress Oscar nominee for Nashville (1975).  Sam Waterston was a Best Actor Oscar nominee for The Killing Fields (1984).  Martin Sheen has never been nominated for an Oscar but  he's got Badlands (1975) and Apocalypse Now (1979) to his film credits.  Sheen has won an Emmy and a Golden Globe nominations for playing President Bartlett on TV's West Wing. 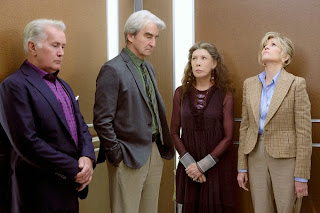 I've written before how much I wish ABC would revive its Movie of the Week series from the 1970s.  Some of those original made-for-TV movies were pleasantly cheesy but there were also strong 90-minute network features that were just as good as new movies we got on the big screen.  I loved Duel, a road thriller from a young new director named Steven Spielberg, the football biopic tearjerker Brian's Song, the revenge murder mystery comedy called The Girl Most Likely To...,written by Joan Rivers, Dr. Cook's Garden with Bing Crosby giving one of the last and best performances of his career as a twisted and dangerous doctor, and the groundbreaking That Certain Summer.  It was a 1972 drama about a gay father coming out to his teen son.  Hal Holbrook starred as the divorced dad who moved from L.A. to San Francisco.  He's happy and in a relationship with a good man played by Martin Sheen.  This was controversial, mature material for TV movies. 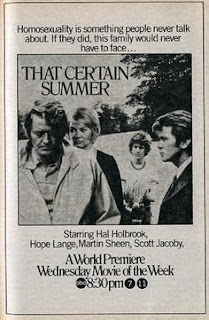 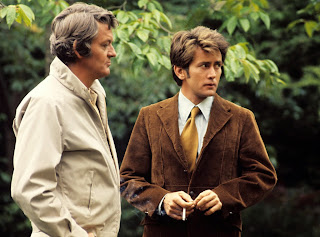 If I could interview Martin Sheen (on the right in the above color photo), I sure would ask him about social changes and progress since that feature premiered on ABC in 1972.

Sheen plays Grace's husband, Robert.  We've seen Sam Waterston for years as a no-nonsense character on Law & Order.  In a rare and refreshing comedy role, Waterston stars as Sol, the man who must leave Frankie because he's fallen in love with Robert on Grace and Frankie.  We see the sweet two senior males kiss.  We see them in bed. 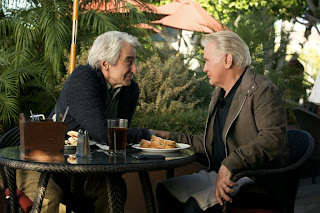 Sheen (on the right again in the above color photo) couldn't go that far when we played half of a gay male couple back in 1972.  Back then, actors could not come out, marry a significant other and keep getting work in film and TV.  Now gay actors play straight characters and gay actors play straight characters.  This is like a full circle role for Sheen to play on television.  And he plays it so very well.  You see him as a man who has come to the truth about himself, wants to do the right thing in a non-combative way divorce-wise, and has a new light in his eyes as he finds a new life and a new love in his later years.  Heck, I got a serious man-crush on him watching those four episodes.

As for Fonda and Tomlin, we loved them together when they had comedy chemistry in a big box office hit from 1980.  9 to 5 co-starred Dolly Parton. 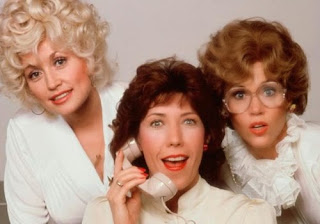 They've still got chemistry.  Their 1980 film comedy tackled feminism and equality in the workplace.  Those were issues of the day.  Woven into the loopy fabric of Grace and Frankie are serious issues of senior citizens being ignored and treated as if they're invisible in society, fear of growing old alone, the need for love, dating and trying to remain relevant for today's workplace employment consideration. 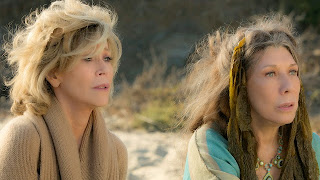 An older woman's sexuality is also addressed.  Fonda gets a hot, steamy, sexy kiss in one episode from a hot, steamy, sexy man in her own age category.  And Grace makes 70 look great.  I totally dig what Martin Sheen is doing with his character and I never thought I'd see Sam Waterston get laughs playing someone so huggable. 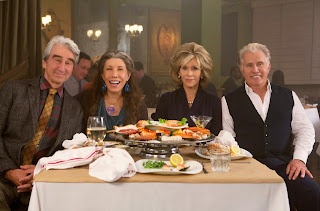 Four characters starting over.  This may not be the best sitcom I've seen in a few years, but Grace and Frankie certainly deserves thanks to executive producers Fonda and Tomlin.  They've boldly slapped down Hollywood ageism and embraced racial diversity with their sitcom's casting of friends and relatives.  With laughs, they show that actors and viewers over 60 are still vital and should not be ignored.  Give Grace and Frankie a look.  I think you'll enjoy it.