2 Oscar Winners in BLACK OR WHITE

Someone please find another movie script for Kevin Costner and Octavia Spencer.  Kevin Costner is a seasoned mature actor now, one who has graced the cover of AARP Magazine.  He's no longer the young newcomer who stole the all-star western Silverado in 1985 with his big screen charisma and then went on to box office stardom in Bull Durham (1988) and the now-classic Field of Dreams (1989).  Besides having movie star charisma and, as James Earl Jones remarked, a quality like that possessed by Hollywood legend Gary Cooper, Costner proved his acting and directing talents in Dances with Wolves.  He directed himself and two other co-stars to Oscar nominations.  He won the Oscar for Best Director and the film won the Oscar for Best Picture of 1990.  Costner hasn't had a box office winner in a while but you must give Costner credit for challenging himself as an actor compared to someone like, say, Bruce Willis who has confused squinting with acting.  He squinted through his latter day Die Hard action hero sequels.  He squinted through this year's tiresome action thriller, Vice.  He even squinted last week on TV announcing the Tony Award nominees.  Costner will vary his roles, his script choices and he doesn't always play it safe.  He's an upscale L.A. widower with an alcohol problem who seeks custody of his bi-racial granddaughter in BLACK OR WHITE. 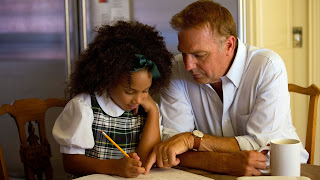 The child's black grandmother in South Los Angeles also seeks custody.  In terms of a movie in which two people go to court for custody of a child, this does not hold a candle to 1979's Kramer vs Kramer.  What this does have going for it is the chemistry of Kevin Costner and Octavia Spencer as the grandparents who go to court.  They need to find another project to do together. 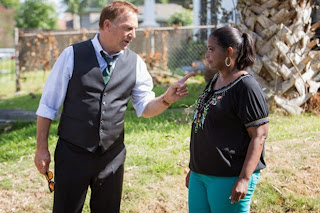 If you're thinking that they seem to young to be grandparents, there's an explanation.  His character's daughter was 17 when she was pregnant.  The young father was 23.  She died.  Lovable little Eloise lives with her granddad.  She loves him and she'd love to see her father.  Elliot Anderson, played by Costner, grieves the loss of a wife and daughter.  In the big, lovely home he shares with Eloise, he's a big drinker.  Even the housekeeper tries to hide his bottles so he won't drink so much.  Rowena Jeffers, played by Octavia Spencer, is an outspoken yet compassionate self-made businesswoman.  She's a single working mother in the real estate business.  As for her wanting solo custody of Eloise instead of shared custody, the script cleverly clues us in that it's not solely about race.  Rowena has a married lesbian daughter who lives near her.  If she can embrace a lesbian daughter and the daughter's wife, she's cool with white folks.  Rowena gets a relative who's a slick L.A. lawyer (played by Anthony Mackie).  He wants to play the race card but she's against that.  She likes Elliot.  She just disagrees with him.  Elliot can afford his own slick legal eagles.  They want to get ugly.  He's against that.  He likes Rowena.  He just disagrees with her.  Not everything is black or white.  There's gray area.  Rowena has a right to be concerned with Elliot's boozing when he's heartbroken.  She has a right to want her granddaughter to know her black side of the family.  Elliot could use some help.  For one thing, his late wife always did Eloise's hair and trying to do comb out her hair for school is a chore he should never attempt with a hangover. 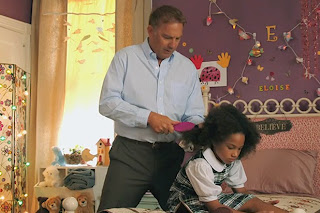 He's got to come to some truths about his life and Rowena will have to come to some truths about hers. Eloise's father is just plain triflin'.  He spent more time doing drugs than he did visiting his daughter.  Now he has a chance to clean up, get it together and be a real dad.  If there was one thing that left me a tiny bit disappointed in the script was that we get another movie with an image of a young, irresponsible unmarried African-American father of minimal education.  However there was one scene that was ripe with irony when Elliot, who is a hot mess himself, has strong words with the dad who did not show up to visit Eloise when promised.  They're on the front lawn of Elliot's house.  Elliot says that he doesn't want to embarrass him in front of his daughter.  Angry Elliot, when he says this, is in his underwear and wearing only one long dark sock.  He'll square off again with Reggie, Eloise's father, later.  André Holland played Reggie. 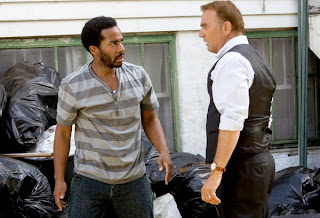 I wondered if this story could've worked with an upscale black widower grandfather who's financially comfortable and lives in big, high tone house while the white grandmother lives in a working class neighborhood.  I grew up in South L.A.  I can tell you that not all white folks are upper middle class in Southern California.  Some in our community were working class like we were.  Costner knows about that.  He grew up in Lynwood, California.  Lynwood was a neighbor to Compton. 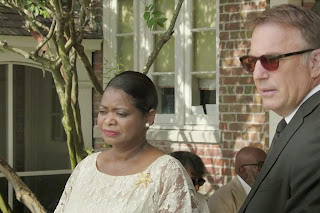 What I loved most, besides the pairing of Costner and Spencer, was the portrayal of South L.A.  The movie got it right.  It was like the South L.A. I knew.  There were working class black folks with nice homes.  They didn't act afool when white folks dropped into the neighborhood.  Look at the scenes when Elliot drives to South L.A. alone to visit Rowena.  Compare those to the stereotypical scenes of Will Ferrell's "fish out of water" rich white guy trying to communicate with a tough South L.A. crew in the comedy Get Hard with Kevin Hart.  The South L.A. black residents in Black or White are not dangerous and rude. 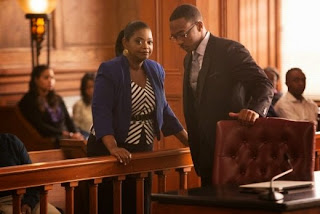 Oscar winner Octavia Spencer brings life and wit to Rowena.  The first courtroom scene made me burst out laughing.  She's brilliant in it.  Rowena's lawyer can't shut her up and the judge is not having it. I've seen some entire movies in the last six months that weren't nearly as good as that one courtroom scene with Octavia Spencer, Anthony Mackie and Paula Newsome as the judge.  Spencer -- who also writes children's books -- is one gifted, versatile actress.  I hope the Best Supporting Actress Oscar she got for The Help won't be the only Oscar nomination in her film  career. 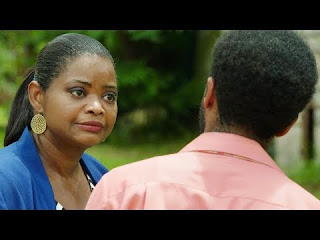 Oscar winner Kevin Costner gives a solid performance here.  There are times you just want to slap some sense into Elliot's head and that's because Costner played the truth of the character.  He played Elliot's heartache.  He did some good work.  Eloise is styled and presented as if she's in a TV commercial for a new family car or lunchbox treats. 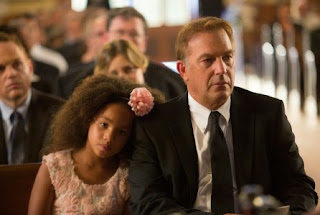 You're visually told how to feel about her because she looks so precious.  She says things to her clueless grandfather like "You're supposed to make me brush my teeth" as she gets ready for school.  The young actress was fine but the script could've dialed down the cuteness a notch.  She looked Disneyfied.  The performances of Costner and Spencer really lift the material.  It's got a made-for-TV feel but they elevate it.

As I wrote up top, it would be great to see the two stars reunited in another project.  Black or White is out on Blu-ray this week.
at May 04, 2015