"Henry, I'm not judging you -- but you're a freak."  That line gets a well-deserved big laugh in DEAR HENRY, an hour-long one-man show written by novelist/playwright Arthur Wooten.  Full disclosure:  I read this play weeks before it landed onstage upstairs at The Duplex, the long-popular cabaret on Christopher Street in New York City's Greenwich Village.  If you've ever seen Love Letters,  this show has a touch of the Love Letters about it, minus one actor.  Young, fastidious Clark Compton Lowell III reads letters exchanged between him and Henry, the elusive object of his desire.  We never see Henry. We only see Clark as he reads their letters and shares the tale of their sexual escapades.  He hopes for a love life with Henry, the unpredictable sexual adventurer. Clark is played by Luke Doyle.  The big Dear Henry surprise last night was discovering that talented young Doyle does not have an agent. 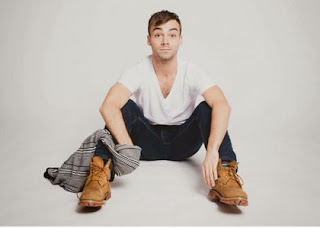 Mr. Wooten has written funny novels that should have been made into feature films or adapted for TV sitcoms.  He's taken meetings with industry executives for such, but none -- as of yet -- has led to a green light for a film and/or TV project.  Dear Henry is more sexual in content.  Very sexual.  That makes it like the kind of entertainment I've seen onstage at The Duplex.  It's had no shortage of one-man shows about a gay character going into R or X-rated detail about his sexual quirks and misadventures.  Dear Henry was a good fit for the Christopher Street cabaret. 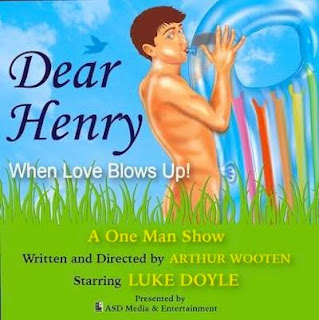 Dear Henry includes sex with plastic objects, sex with furniture, descriptions of festive flatulence (yes, I just wrote that), some gross-out fetish behavior, an impromptu toilet break, prison sex, dangerous fish and a prosthetic penis.  It also has long medical terms.  In several shows I've seen at The Duplex, the journey of self-discovery for a gay man is usually of the "I-Me-Mine" variety.  The action is pushed by hormones.  Self-discovery in those shows always comes from fun with one's genitalia.  It never comes from being of service to others and doing charitable deeds like teaching underprivileged adults how to read, visiting and helping the elderly, feeding the homeless in a soup kitchen or other volunteer activities.  Nor is the object of desire someone who devotes time to charitable deeds.  In that regard, Clark's attraction to Henry makes him ripe for The Duplex. He loves how non-conservative Henry is.  And Henry must be a hot-looking guy.  If he looked like Jack Black and pooped in a shoebox, would Clark still romantically desire him?  Hot looks are a successful resumé in young gay male culture -- even if you have no skills.  Wooten's writing and directing is clever.  You do wonder if Henry really does exist or what appears to be Clark's apartment is really a room in a sanitarium.

When I saw the show, I felt that Arthur Wooten could've trimmed some of the extreme sexual passages. Not because I'm a prude.  But because he found such a strong actor that the excess sex wasn't needed to hold your interest.  Luke Doyle brought the character to life and found the basic core of hope that the story has.  Hope fuels Clark's character.  There's unusual and lurid sex coupled with some tenderness, like in a Gregg Araki movie such as Mysterious Skin.   Also, it's a difficult piece to perform.  It may not seem so because, frankly, the actor made it flow.  In other one-man shows I've seen at The Duplex, you could tell that some stuff was improvised.  Or the performer referred to paperwork with notes onstage.  That was all acceptable.  But Doyle was off-book.  He memorized this complicated comedy monologue.  His physicality was excellent.  Not one wasted movement.  His slightest gestures were inspired and revealed character.  The way he'd twirl a foot, a hand placed demurely under his chin, the tilt of his head when talking to the unseen Henry -- all good.  He also plays Henry -- quite butch and with more bass line in his carriage compared to the treble clef way Clark carries himself.  The actor also plays Clark's mother. Doyle was specific in each different character he played.

Ten minutes into the show last night, I said to myself "Wow...this kid's good."  (The actor is in his early 20s.)  If I was Luke Doyle's agent, I'd be submitting him to play political aides on shows such as House of Cards and Scandal or a law school student on How To Get Away With Murder.  I'd get him cast as a Brooklyn hipster on HBO's Girls and I'd definitely be submitting him for parts in national TV commercials.  If I was an agent and had seen Dear Henry, I would've stayed to meet the actor after the show -- which I did -- and I'd have given him my card so he could call my office and set up a meeting.

Do agents still do that sort of thing anymore?   They used to.  If not, shame on them.

Once you get through all the sex, Dear Henry is about hope and acceptance.  I hope Luke Doyle lands a smart, imaginative agent who will get him the quality of auditions he deserves.  It was a thrill to watch his work.  Visit the actor's website here:  LukeJDoyle.com.

To see and purchase the playwright/director's novels, visit his website here:  ArthurWooten.com.

Dear Arthur, thanks for bringing such a talented new actor to our attention.