With today's technology, it's got some impressive special effects that we didn't see in Tobe Hooper's 1982 original.  But I really missed the giant tissue monster and the possessed closet that looked like a giant vagina trying to supernaturally suck little Carol Anne into it. 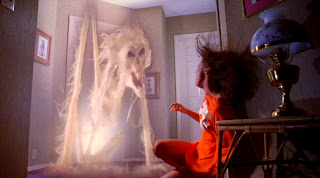 The remake is, at best, fair.  The scariest thing about this 20th Century Fox release is that Hollywood seems to have forgotten how to write good material for actresses.  One element that won us over about the original was how the married couple played by Craig T. Nelson and JoBeth Williams totally loved each other and their kids.  That suburban husband and wife had a fun marriage.  We got wit and humor in their relationship.  He was a big lovable papa bear.  She was the smart, energetic and ultimate cheerleader -- a cheerleader who turns into the family quarterback as she charges down a hall to rescue her child from a demon. The suburban mom and the short psychic lady were vivid characters and memorable women.  The daughters in the poltergeist-plagued family stood out too.  In the remake, the writing is average and the women are a bit dull.  The dad is now portrayed by talented Sam Rockwell. 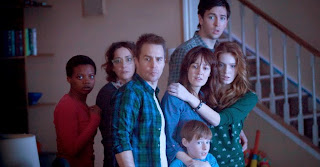 He's one of those actors -- like Guy Pearce and Ewan McGregor -- who should have an Oscar nomination or two to his credit, but doesn't.  Rockwell plays the father who has been laid off from work.  Recession hit the family.  He's frustrated. He may drink a wee bit too much.  Husband, wife and the three kids need to move to a smaller house.  Wait till you see the house.  I grew up in a family of five in Los Angeles.  The five of us shared one bathroom in a ranch-style house.  Their new downscale house in the suburbs is the size of a bed and breakfast. It's big.  With lots of closet space.  Rockwell's character hopes he can afford this new house.  His wife is a writer, but we never see her write.  She's pleasantly bland.  She doesn't have the verve JoBeth Williams had in the original.  The oldest daughter is a teen brat.  The little girl has imaginary friends (always a red flag in a horror movie) and the youngest boy is basically ignored by his parents when he professes that he has some serious fears about things in the new house.  We, of course, know that it's a huge mistake for the parents to ignore his expressed fears.  In the first 10 minutes of the movie, the boy finds his little sister talking to a closed closet.  She's got an invisible friend.  Then they both experience a hair-raising force. It really does raise their hair.  And then there's the flatscreen television.  The little sister puts her hand to the screen, hands appear through the static on the other side of the screen and her brother freaks out when the TV stays on even though he yanks out the plug.

Being that this is a Caucasian family in a horror movie, when they see that something abnormal, supernatural and scary has happened in the house...they decide to stay in it.  Here's the trailer.
If that had been a black family like in a Tyler Perry movie, Madea would've tracked down the lady realtor who sold them the house and gone upside her head with a skillet.  In the remake, the parents eventually do learn to listen to their son.  It's a lesson they had to learn the hard way.

The little psychic lady from the original has now been changed to a macho male ghost hunter who has a reality TV show.  The female paranormal expert with him seems rather passive in his presence.  Another woman character who wasn't exactly vivid.  Why was she written to be so drab?

In the original, we really connected to that family.  I would've loved to have them as neighbors -- if it wasn't for all those spooks in their house.  In the remake, the family is nice but it's not like they're so charismatic you want to invite them over for a cookout.  Like the walls in their new living room, they're sort of beige.  And so is the movie.

This Poltergeist has more ghosts than the original but none of its spirit.  It runs about 90 minutes.

To see the gifted Sam Rockwell at his best with much better material, try these 5 movies:

Oh...and rent the original Poltergeist, if you haven't seen it.