Back in the 1990s, after my three years as a daily network talent on VH1, an agent with the William Morris Agency in New York City took me on as a client.  I told him what kind work I wanted.  For film and TV acting, I felt I was perfect to be the wisecracking best friend to the handsome male lead.  Remember Sleepless in Seattle?  My former VH1 co-worker, Rosie O'Donnell, played the wisecracking best friend to Meg Ryan's female lead character.  I wanted the male equivalent of the Rosie role.  The agent submitted me to audition for a romantic comedy.  But he submitted me to play the handsome male lead, the guy the gorgeous girl falls for.  That was wrong.  I should've auditioned for the role of his funny best friend.  As Suzanne Vale says in Postcards from the Edge, "I'm built more for comedy."  Needless to say, I did not get a callback after that audition.

That brings me to the miscasting of actor Nick Kroll as the lead in ADULT BEGINNERS. 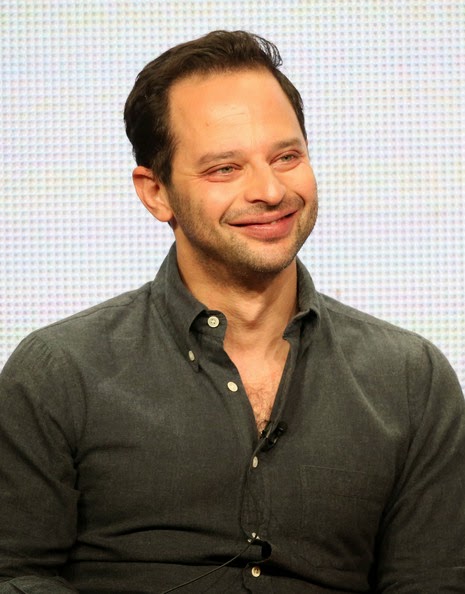 He plays Jake, the first person we see and the leading man in the story.  He's the self-absorbed, hotshot entrepreneur in New York City who's pushing his new tech gadget onto the marketplace.  At the hipster launch party, he addresses the guests with "When I look around this room, I see so many people that I love.  For their money."  His guests laugh.  Soon, the laughter stops.  His high-tech headgear flops.  Nick later admits "I lost all my money and then some."  He also lost other people's money because guests at that party invested in his project.  Jake is flat broke and in a desperate situation.

He turns to a sibling in New Rochelle, New York.  Relations are a tad strained between Jake and his sister, but they do love each other.  He asks if he can "stay for a few months and look after Teddy."  Teddy is her sweet toddler.  Rose Byrne plays Jake's sister. 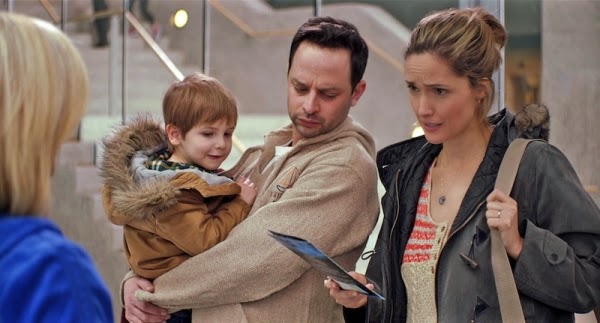 When I had a one-bedroom apartment in Brooklyn, one of my dearest friends was having a hard time and needed a place.  I took him in for a few months and he gladly slept on my sleeper sofa.  Jake's sister  is tentative about taking her brother in for just a few months.  It's not like she's in a one-bedroom apartment.  There's just her, her husband and 3 year old Teddy in a suburban house big enough for Maria, Captain von Trapp and all the von Trapp kids in The Sound of Music.  Jake, as you can expect, becomes sort of the uncle nanny to little Teddy.  While being a good man-nanny, he meets a gorgeous babe. 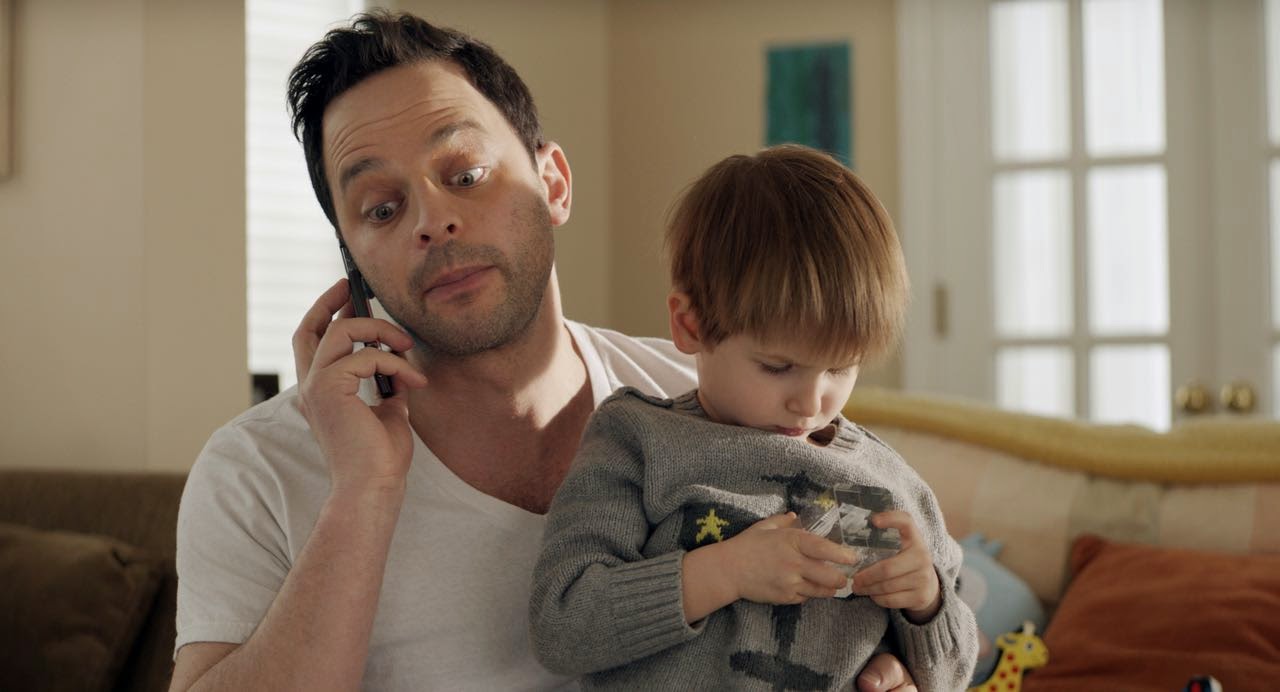 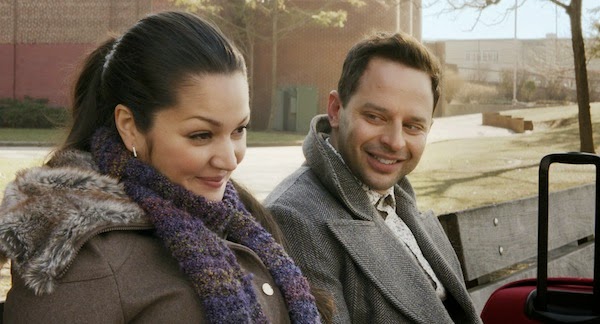 Instant sexual attraction and there's regular sexual gratification.  Or so the script would have you believe of this couple.  By the way, who plays Jake's brother-in-law and Teddy's papa?  Handsome, macho, magnetic Bobby Cannavale. 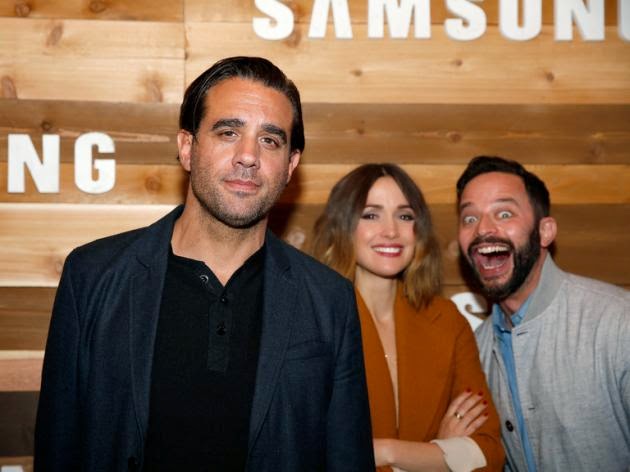 Here's a photo of Bobby Cannavale, Rose Byrne and Nick Kroll.  I do not mean this to be snarky.  I write this as someone who felt he was submitted to play the wrong part in a romantic comedy years ago.

Nick Kroll should've been cast as Teddy's dad.  Look at him in the photo and look at Cannavale.  Nick Kroll is not the lead male who attracts a hot babe.  He'd be the dorky blind date who'd say to his handsome best friend, "No.  She's never going out with me again.  She'd rather have Edward Scissorhands as her gynecologist than see me again."

Plus, Cannavale just has the big screen leading man charisma than Kroll does not.  Nick Kroll is popular on Comedy Central in sketches on his Kroll Show.  But he can't yet carry a feature film in which he's positioned as the sexy leading man who's funny and attracts a luscious young lady.  It especially doesn't work when he's opposite supporting player Bobby Cannavale as a suburban man who wishes his wife showed more sexual interest in him.  I don't blame Kroll.  The script needed work.  Adult Beginners is like a comedy we'd have gotten in the 1980s when "yuppies" were in season.  It would've been a better comedy starring someone like a young Tom Hanks, Michael Keaton,  Bill Murray or Robert Downey, Jr.

Cannavale, as the young dad who discovers he'll be a dad again, would've added needed juice and snap to this feature had he been cast as the Jake character. 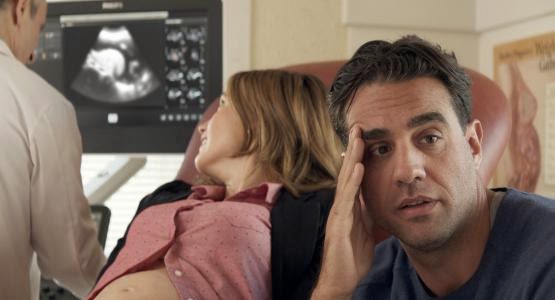 We discover why there's been a bit of a rift between brother and sister.  Of course, being the uncle nanny will teach Jake that family is more important than tech gadget success in Manhattan.  Overall, how is the movie?  I sat through Adult Beginners so that you don't have to.  It's mediocre.  And miscast.    Also, exceptional actors are wasted in small parts that must have taken one afternoon to shoot.  Some of those actors are Jane Krakowski as the singing swimming instructor for adult beginners, Joel McHale (NBC's Community sitcom), Celia Weston (Cameron's "Mother Tucker" on Modern Family and Lillian Hemmings on American Horror Story) and Bobby Moynihan (Saturday Night Live).

For a much better comedy/drama about the importance of family and siblings repairing their relationship, rent The Skeleton Twins.  It's one of my favorite films released last year.  It's funny, touching and surprising.  You'll be moved and impressed by the dramatic work of the two leads -- Kristen Wiig and Bill Hader, both formerly of Saturday Night Live. 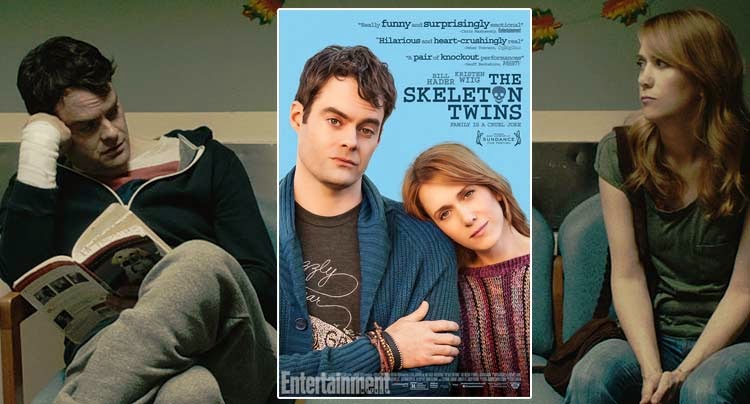 He plays the gay brother emotionally healing from a suicide attempt and she's the unhappily married sister.  Beautiful performances.  Ty Burrell has a supporting role.   TV's Modern Family star gave his dramatic acting muscles a fine workout.  I felt the truth of this story and the performances.  I connected to Hader's character.

Because of the Great Recession, I was in a desperate situation and needed to be taken in by a married sibling in a big house in the suburbs.  But I couldn't really connect to characters in Adult Beginners even though Jake says "I just don't want to start over again."  I've been there.  But Adult Beginners skims the surface and really doesn't go into much depth.  The script needed more truth and more comedy.  And better casting.  The movie opened last Friday and it's available on VOD.