John Travolta is THE FORGER

You get an art history lesson in THE FORGER, the new John Travolta drama.  "It's what a person does for you that counts," says a Boston grandfather to his teen grandson.  The father, played by Travolta, is fresh out of prison.  Granddad was a con man and a petty thief.  He's still got skills.  Dad is the forger, but he's more a good guy than a thug. 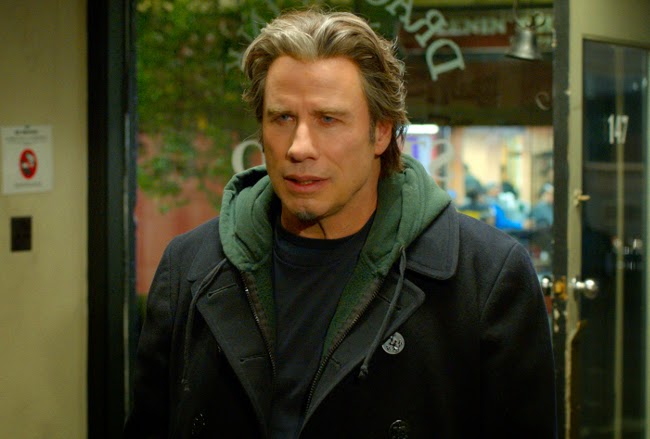 He'll become part of a plan to steal an original Monet from Boston's Museum of Fine Arts so he can get a bundle of money and take care of his son.  The kid has cancer. 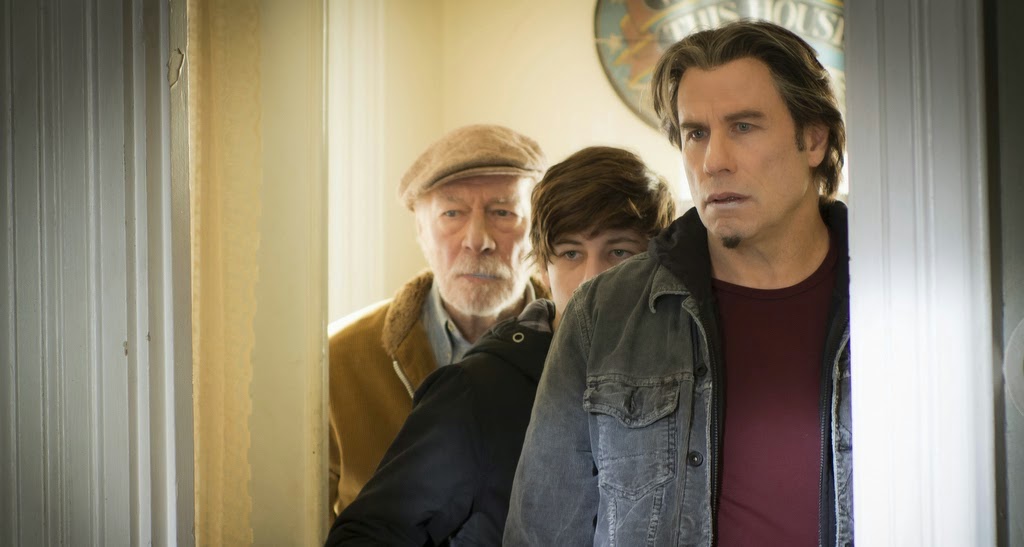 The three live a real blue collar section of Boston.  When tough Ray Cutter (Travolta) gets out of prison and is picked up by a shady looking buddy for a ride home, you just know he'll be involved in a crime again -- because we've seen that scene in movies already.  That's the main criticism about The Forger.  You feel like seen it before as a movie or as an episode of a one-hour cop show TV series.  Even though the kid having cancer feels like a screenplay gimmick, it does allow for a different element in this kind of story.  And John Travolta does show that he's still a good actor.  The last two times I saw him in movies, he was the bad guy.  Travolta was the villain in the remake of The Taking of Pelham 1 2 3 and then he was the crooked federal agent in Oliver Stone's bloody Savages.  He was very good in that bad Oliver Stone crime story.  Now he's the jailbird we root for because he's risking prison time again for the love of his child.

Travolta has some good moments.  About one hour into the action, Ray studies the extraordinary work and unique style of French Impressionist Claude Monet so that he can forge a classic Monet painting on display in Boston.  A friend of mine viewed a Monet in a Paris museum.  He told me that no photos were allowed to be taken of it and the atmosphere in the room in which the Monet hung was very reverential.  He himself was in awe of Monet's genius.  He said, "It was like he deconstructed light."  John Travolta was quite good as Ray trying to enter the mind and soul of Monet in order to capture and copy his painting style.  Ray's forgery is exceptional.  But if Ray's art forgery is known to be so exceptional, why did he hang with those low-level crooks?  Earlier in his life, why didn't he take his skills and upgrade his life doing artwork for a Boston ad agency, a noted area theatre company or a magazine?  I wonder if the screenwriter thought about that. 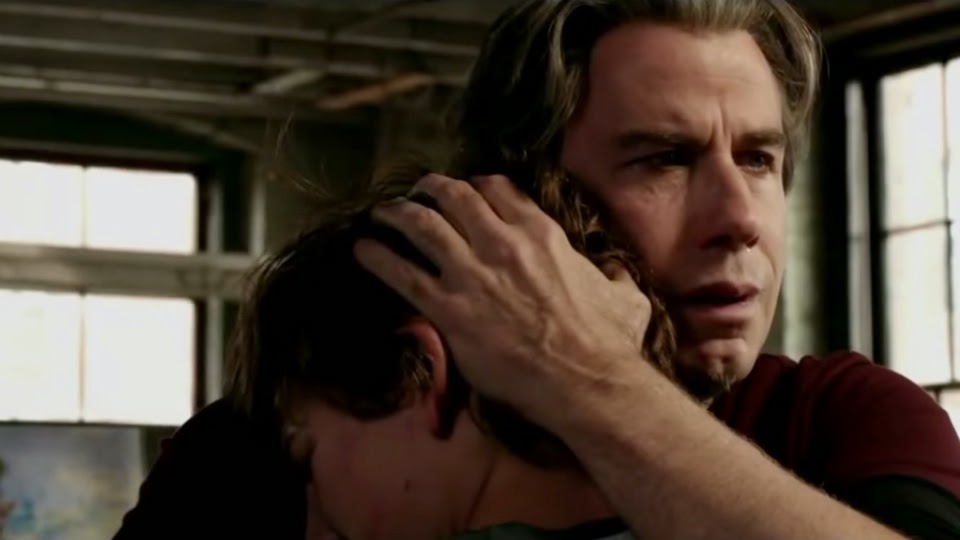 Travolta's scenes with Tye Sheridan as his ailing son were all heartfelt.  I wonder if the actor drew emotionally on his relationship his late son for truth in those scenes.  Screen veteran Christopher Plummer stars as the grandfather.  Captain von Trapp from The Sound of Music drops the F-bomb a few times in this movie.  As usual, Plummer is fun to watch although there's little for him to do but act crusty.  Father, son and grandfather bond when all three are involved in the Monet painting art heist.

That sequence tickled me a bit.  Christopher Plummer, cool dude that he is, turned 85 last year.  For the late night art heist scenes in the art museum, he's dressed all in black like he's in Ocean's Eleven.  Who brings an 80-something guy along to be part of a complicated art heist in a huge museum late at night?  Find a Monet?  Yeah, but first let him find a men's room so he can urinate frequently.  He's 80-something, for goodness sake!  And what if security guards enter and they have to run?  Heck, I'm surprised Granddad could even stay awake after 10pm to pull off that art museum job.

Here's a trailer from The Forger starring John Travolta and Christopher Plummer.
The son has three wishes -- one is to meet his mother.  Ray hasn't been the best father and he's painfully aware, because of his son's illness, that time is fleeting and it's also precious.  Travolta's performance is fine in this drama that just average.  The Forger opens April 24th nationally and can be viewed On Demand.

If you want to see one of the rare movies in which John Travolta plays a cop on a case, I've got a DVD rental tip for you.  He made a crime drama based on true life, notorious murder case. The film was never released nationally.  I don't know what happened.  It was made and screened at one arthouse movie theater in New York City for a week or two.  Travolta starred as a New York detective in the 1950s and his partner was played by James Gandolfini during his years of fame on The Sopranos. 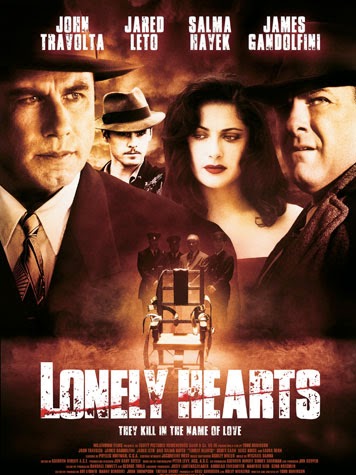 In LONELY HEARTS, the two homicide detectives are on the trail of Martha Beck and her lover, Raymond Fernandez.  They were known as "The Lonely Hearts Killers" because they found their victims through personal ads.  The two serial killers were played in a 1969 black and white, low budget  indie movie that I highly recommend.  The Honeymoon Killers boasted a blazingly good performance from Shirley Stoler as Martha (Stoler was full-figured like Beck) and Tony Lo Bianco as Ray. 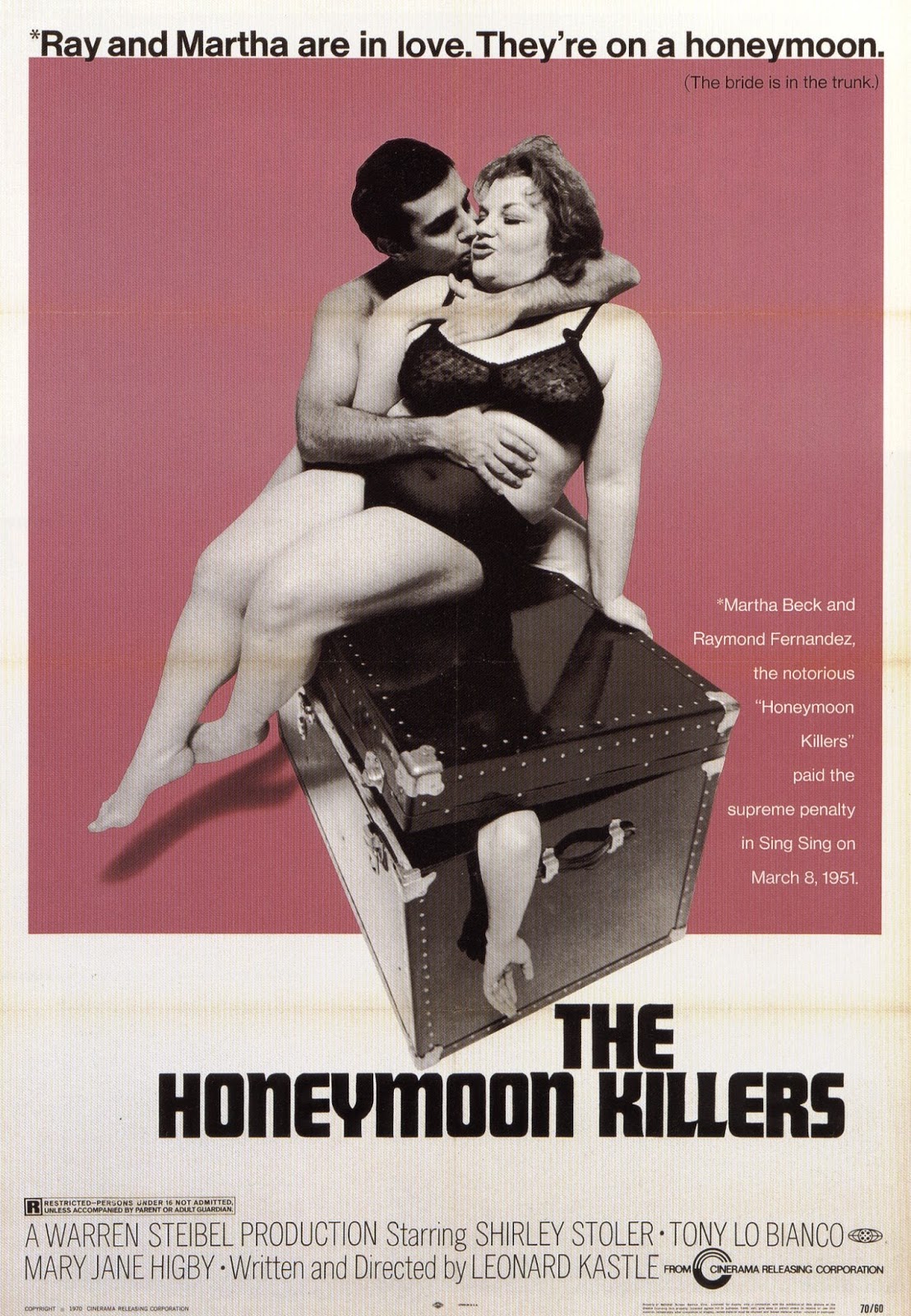 Salma Hayek isn't plus-sized like the real murderess, but she's so bat-shit crazy and sexually uninhibited as Martha in Lonely Hearts that she practically sets the screen on fire.  She's lovely and lethal.  Her con man lover is played by Jared Leto.  I thought he was really good as Ray.  Jared Leto now has an Oscar for Best Supporting Actor (winning for 2013's Dallas Buyers Club).  Here's a Lonely Hearts trailer.
Lonely Hearts is worth a look and it's better than The Forger.  It's available on DVD.