Detail in FROM HERE TO ETERNITY

"Then I'll meet the proper man, with the proper position, to make a proper wife, and can run a proper home and raise proper children.  And I'll be happy.  Because when you're proper, you're safe."

So says Alma as played by Donna Reed in 1953's FROM HERE TO ETERNITY.  Based on the bold best-seller by James Jones, the film was directed by Fred Zinnemann and the screenplay was written by Daniel Taradash.  Taradash did an excellent job at keeping key scenes with much of the same dialogue while relocating them to a place that would appease the Hollywood censors of that time.  For instance, the famous kissing scene that Burt Lancaster and Deborah Kerr did on a beach?  In the book, the characters said the same lines naked in bed.  There was horizontal action for Donna Reed's character too. 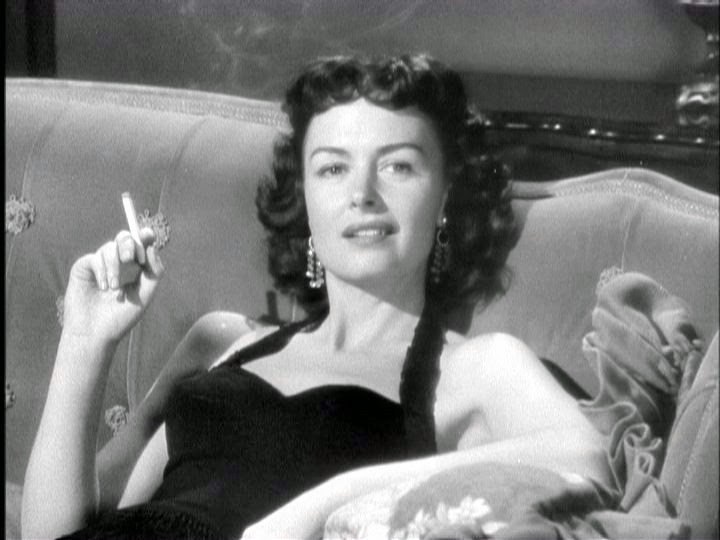 In the movie, we meet Alma when she's on duty at a gentlemen's club in tropical, inviting Hawaii.  The joint is called The New Congress Club and when she's working, she's known as Lorene.  The joint is full of G.I.s out for booze and babes.  It's not technically a bordello in the movie, but we know what the real deal is when Lorene describes working there as "two steps up from the gutter." The dames are being paid for sexual pleasure.  Donna Reed won an Oscar for playing the sad-faced and lonely Lorene. 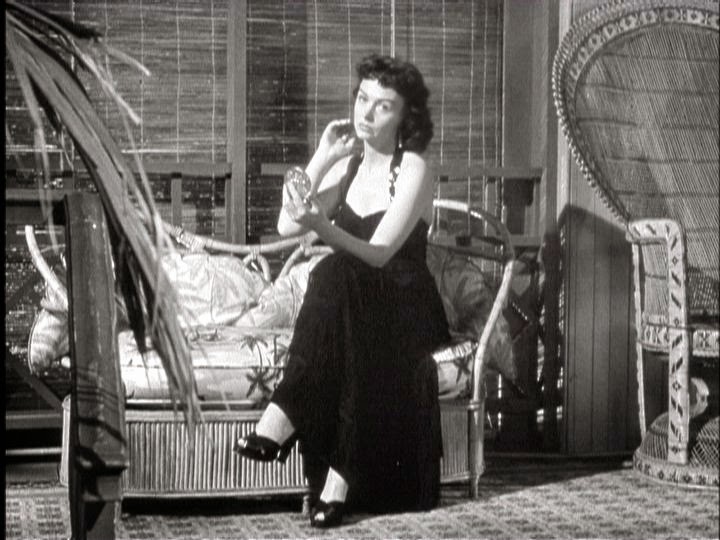 Lorene catches the eye of an Army private played by Montgomery Clift.  He won't be just another customer.  The soldier's name is Robert E. Lee Prewitt. 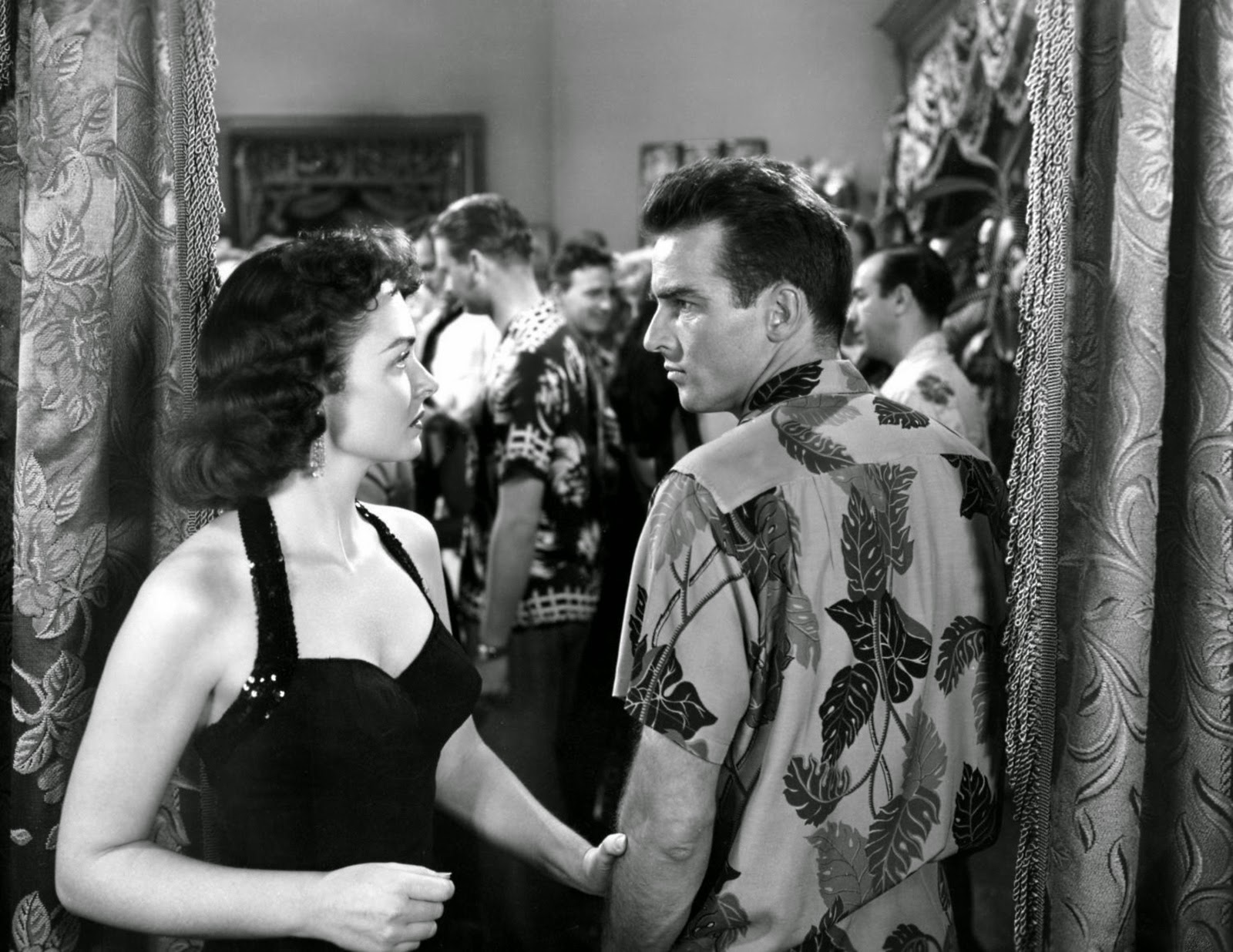 Lorene/Alma was an extreme departure from what may nowadays be Donna Reed's most famous performance -- that of the sweet and virginal All-American girl, Mary, who becomes Mrs. George Bailey in Frank Capra's It's a Wonderful Life (1946). 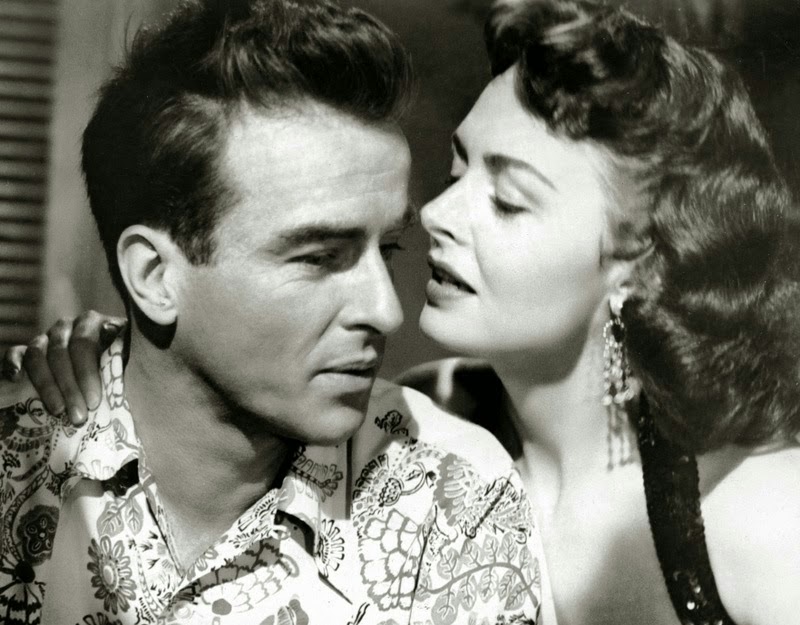 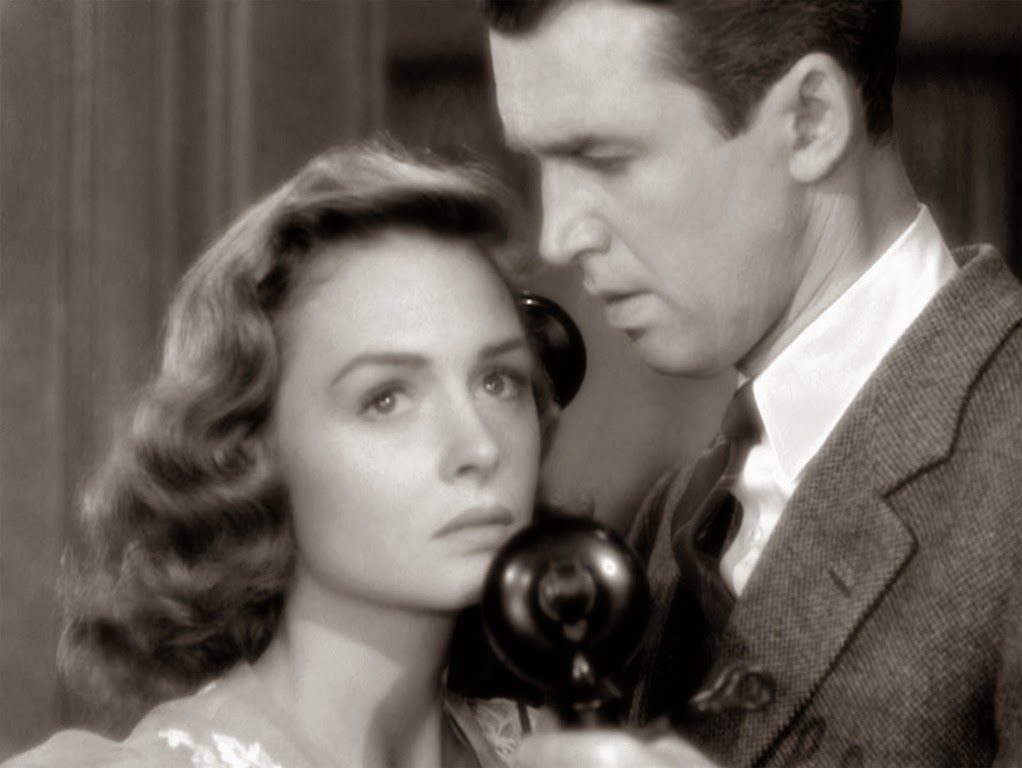 In From Here To Eternity, we see lives intertwine in Hawaii.  The year is 1941 and the story will take us to an early morning when no one felt safe -- the horrible morning when the Japanese attacked Pearl Harbor.  America would promptly charge into World War II.

Alma was an Oregon girl from the wrong side of the tracks.  She loved a guy who rejected her because she was from the wrong side of tracks.  Hurt, she headed to Hawaii where she heard she could make "a stocking full o' money."  She plans to return to Oregon with enough money to buy a house for her and her mother.  She wants security.  She falls in love with the Army private.  They live together for a time -- until war starts.

One small detail about Lorene moves me every time I see From Here To Eternity.  At The New Congress Club, she's Lorene.  Then we learn that her real name is Alma.  When she's at home with Prew, the Montgomery Clift character, she dresses like the "proper wife" she longs to be.  To me, Lorene is probably emotionally detached during on-duty sex at the club.  She's in Hawaii, far away from Oregon, where no one knows her.  She does what she does solely for the money to make herself and her mother comfortable.  Only her body is engaged in sex.  Not her heart and soul.  It's different with Prew.  They love each other.  At home, she wears a small crucifix on a chain around her neck. 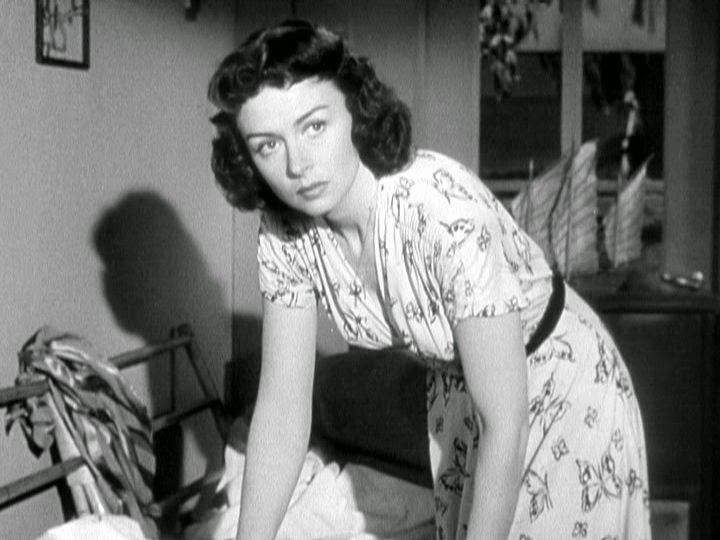 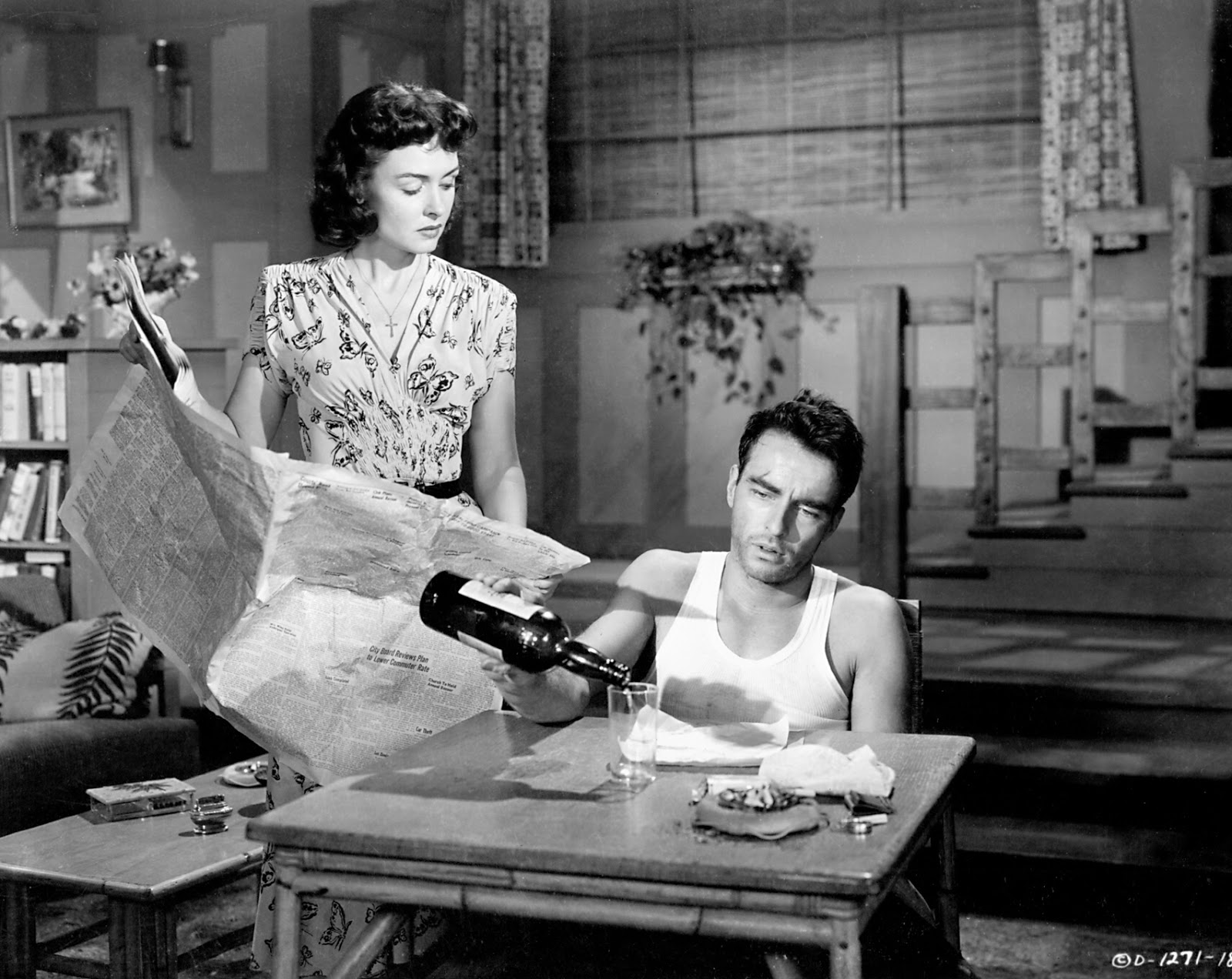 She never wears it around her neck at The New Congress Club.  Only when she's at home.  That little detail is so revealing.  I've seen From Here To Eternity ever since I was a kid watching it on "The Late Show" on local CBS.  I never noticed Alma's simple crucifix until a few years ago.  It really hit me when I noticed it.  After the Pearl Harbor attack, Prewitt will leave Alma to fight.  He's "a 30 year man" in the Army although he's A.W.O.L.  She fears she'll never see him again.  The way that Zinnemann shoots her anguished moment, pleading with the missing soldier to stay, she does not look like a prostitute at The New Congress Club.  She looks like an average suburban wife.  See for yourself. 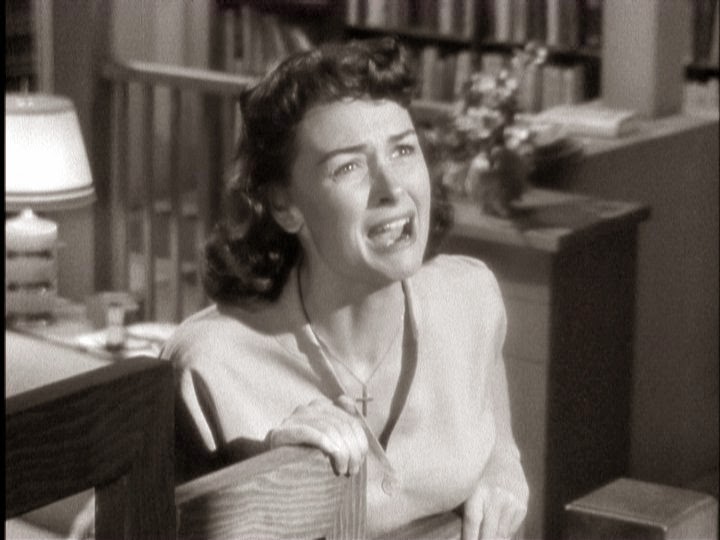 A proper dress.  A proper home.  Proper bookshelves filled with hardcover books.  And a proper crucifix on a chain around her neck.  That scene breaks my heart now more than it did when I saw it 20 years ago on TV.  The details in the shot and the way Zinnemann composes it...wow.  I feel Alma's pain.  Many of us did something we felt we had to do in order to change our luck and repair a broken heart only to have life pull the rug right out from under us again.  Her work at The New Congress Club did not define who Lorene/Alma was.  There was another dimension to her that men didn't see.  Prew saw it during their short span of domestic happiness.  That simple, little crucifix says so much.

From Here To Eternity was nominated for 13 Oscars and won 8 of them.  It won for Best Picture, Best Director, Best Screenplay, Best Supporting Actress (Donna Reed) and Frank Sinatra won the Oscar for Best Supporting Actor as Prew's loyal friend, Maggio.  Maggio, an Italian-American soldier, is the victim of bigotry and bullying. 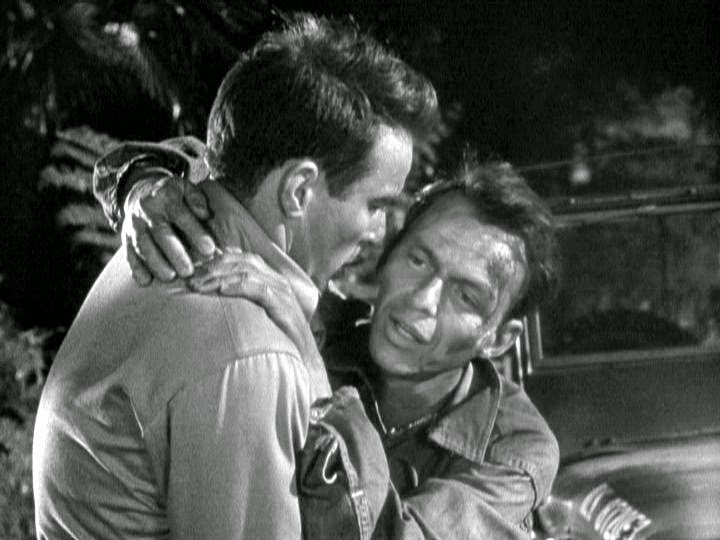 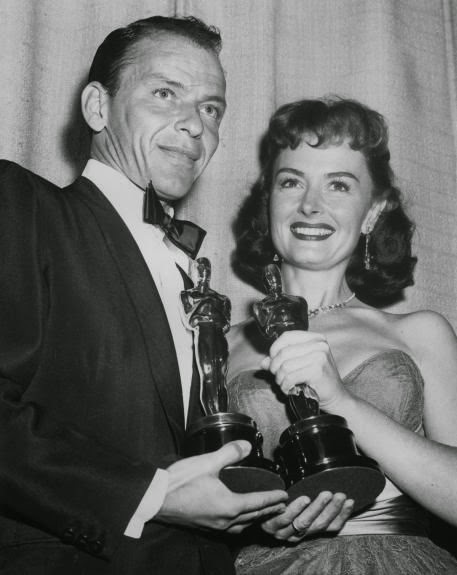 In the 1940s, Donna Reed and Frank Sinatra were contract players at Hollywood's powerful MGM studios.  There they both had wholesome, innocent onscreen images.  The popular vocalist played the sailor with the boy next door appeal in musical comedies such as Anchors Aweigh and On the Town, both with Gene Kelly.  Challenging themselves artistically, taking on gritty dramatic material for another movie studio, that was a big gamble.  It paid off for Donna Reed and Frank Sinatra that Oscar night.