Mae West in I'M NO ANGEL

Let me use a modern term from my urban roots for my description of Mae West in 1933's I'm No Angel.  She is so "ghetto fabulous" in that movie!  It's my favorite Mae West comedy.  This is the one starring Mae as Tira, a traveling carnival hootchie koo dancer who becomes a star when he moves up to being a glamorous lion tamer in a high class circus.  Her other comedy release for 1933 was She Done Him Wrong.  Both movies had screen newcomer Cary Grant as a leading man. 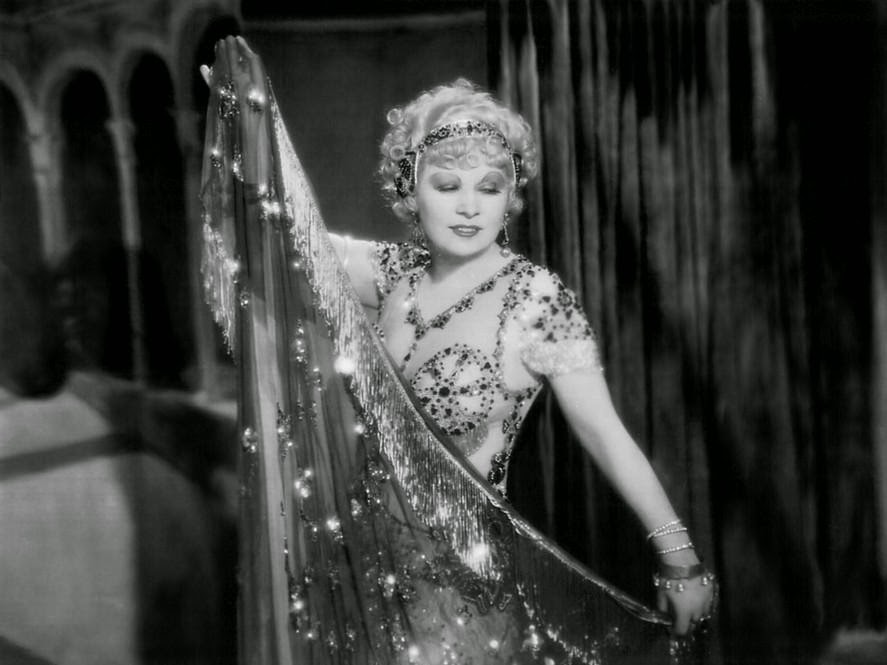 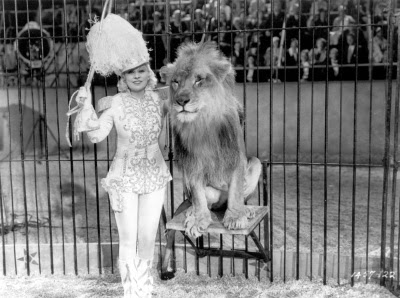 As Tira, Mae West was the home girl mantrap who knew how to get down for the sake of her upward mobility.  She was like a walking amusement park. 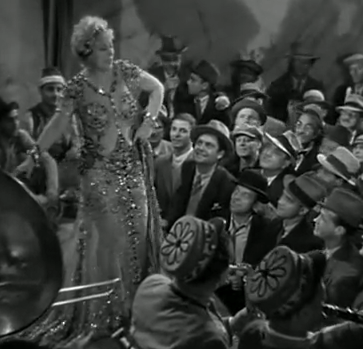 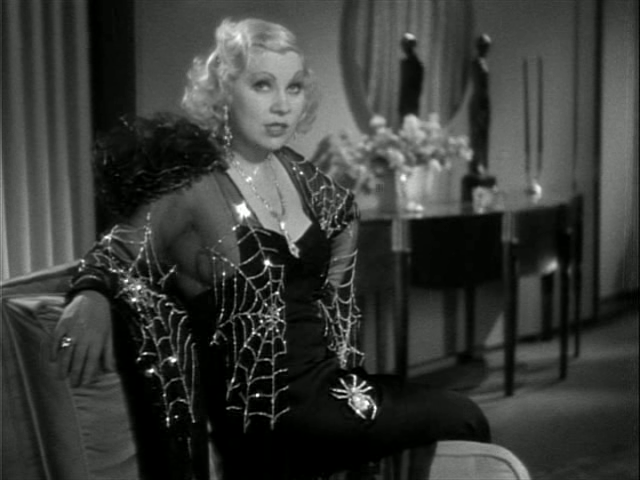 When I was a kid growing up in Los Angeles, I'd see Mae West movies a lot on summer and Christmas vacations thanks to KTLA/Channel 5.  That local channel was hooked up to a large Paramount Pictures library.  Now that I'm older, and I'm a veteran TV performer who has done many celebrity interviews and reports, I've come to appreciate the talent of Mae West a whole lot more.  Let's face it.  She was not a strong actress like a Bette Davis, Barbara Stanwyck or a Jean Arthur in the 1930s, Mae's peak decade.  But, within her limitations, she was brilliant.  The word "iconic" is tossed around too much nowadays.  However, Mae West was truly a Hollywood icon. 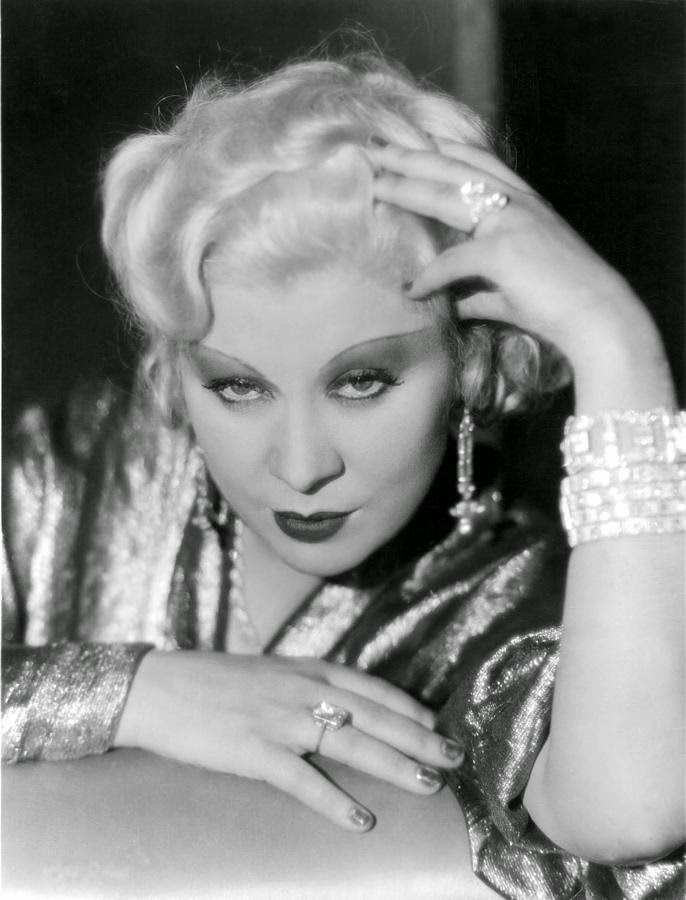 Mae West went to films after years of creating and shaping her persona on stage.  She was a Broadway playwright.  A controversial playwright who lampooned sex in her risqué comedies.  No one knew how to write for Mae West better than Mae West.  She hit the Depression era Hollywood as a comic actress and a screenwriter.  It's been written that She Done Him Wrong, an Oscar nominee for Best Picture with a story by Mae West, was such a big box office hit that it saved Paramount Pictures from bankruptcy. 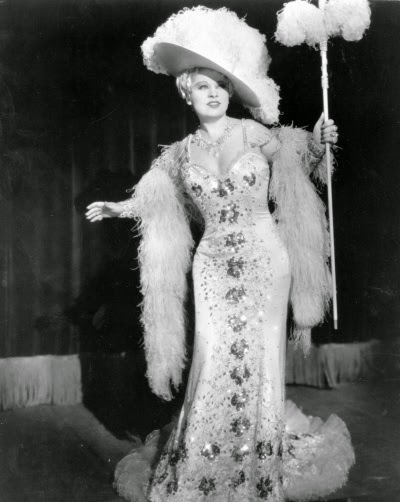 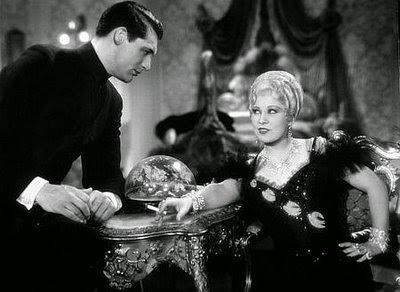 She really fascinates me in I'm No Angel with Cary Grant. 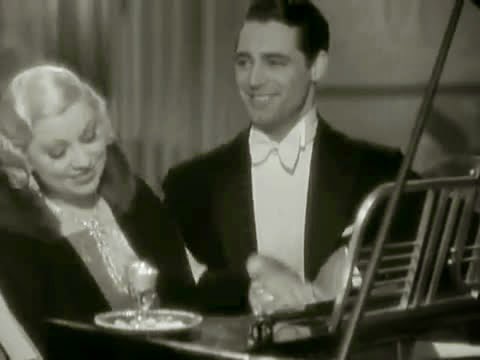 Entertainer and screenwriter Mae West was a full-figured blonde who became a Hollywood sex symbol in her 40s.  Dig it.  She was not a 20-something, slim blonde.  She was in her early 40s and was, by no means, skinny.  Her voluptuous frame was called "the Big Ben of the Hourglass Figures."  In Hollywood today, the odds probably would've been against her due to age and shape.  Mae was a pioneer for women in film.  In her movies, like I'm No Angel, we see her culturally embrace two often disenfranchised groups that she was inspired by -- black folks and gay men. 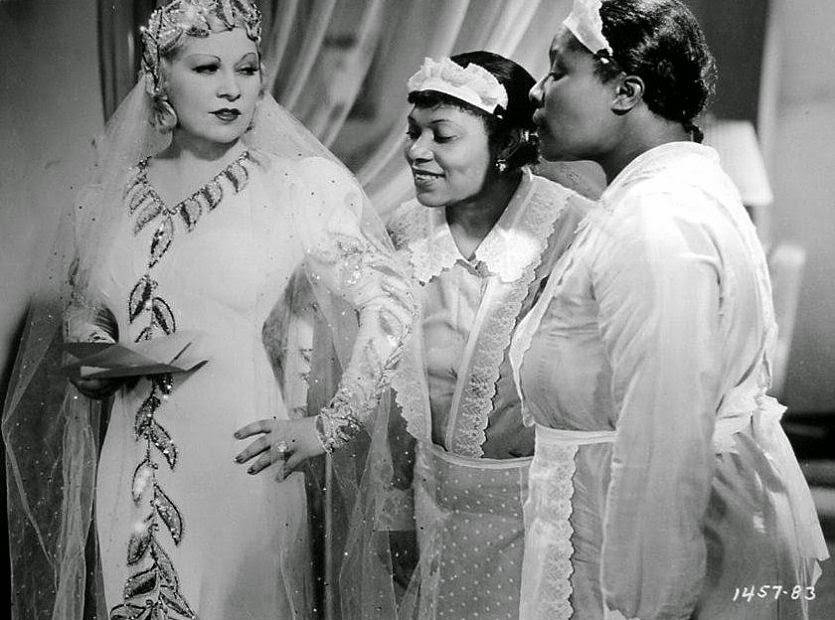 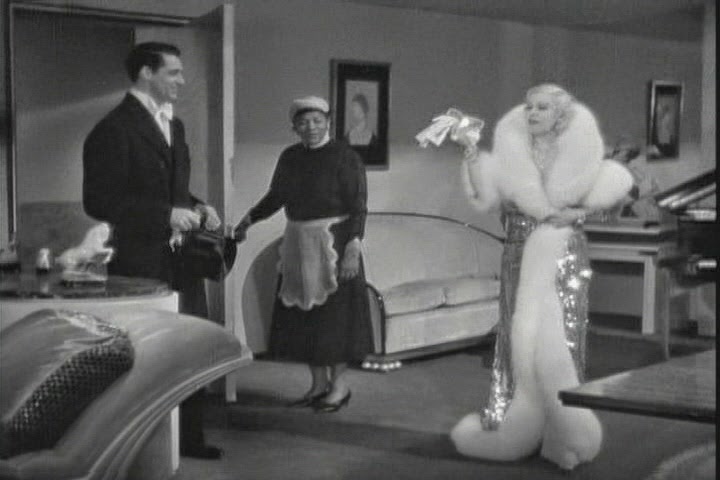 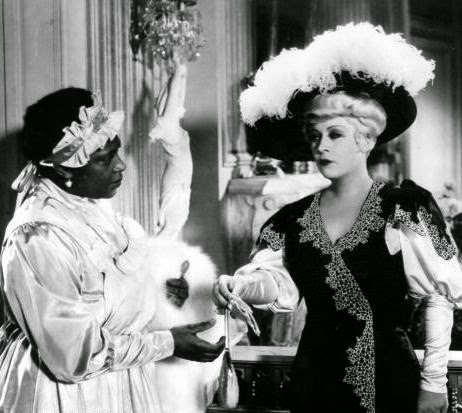 When a Mae West character, who was usually from the wrong side of the tracks like a lot of us minority folks were in the movies, made it to the big time and had domestic help, the black maids were never treated like second class citizens.  Her black maids were treated more like girlfriends.  Watch when Tira relaxes with her maids, tries on new clothes and sings "I Found A New Way To Go To Town."  (Notice future Oscar winner Hattie McDaniel in that scene.)  Those gals are having a good time! That's exactly what I mean about Mae West being "ghetto fabulous."  She would've been right at home singing that song onstage at The Apollo in Harlem.

As for the gay male aspect, notice when she calls the lawyer played by Gregory Ratoff (who went on to play Max Fabian in All About Eve).  The art decoration in his room is the visual clue.  He's part of Tira's inner circle.  She needs his help.  He's a friend.  He's not an outsider put in that "Oooh! Look! He's a pansy!" view the way Busby Berkeley did in 1930s movies.

Queen Latifah got a Best Supporting Actress Oscar nomination for the musical comedy Chicago.   A couple of years ago, I rented I'm No Angel again and thought a Mae West screenplay like that could be reworked, updated and made into a zesty vehicle for Queen Latifah.  Or it could be remade and set in the 1930s to make Latifah looks glamorous in costumes designed for its original period.  Queen Latifah in a remake of a Mae West classic could  only be better than Latifah's alleged comedies Taxi with Jimmy Fallon and The Dilemma starring Vince Vaughn.

Things I like about West's character in her Paramount years are that minorities are never invisible to her.  Look at the sincere gratitude and respect she gives the Chinese man who helps her in the open of Klondike Annie (1936).  Her San Francisco singer character gives her maid money to reunite and a start a new life with the man she loves. 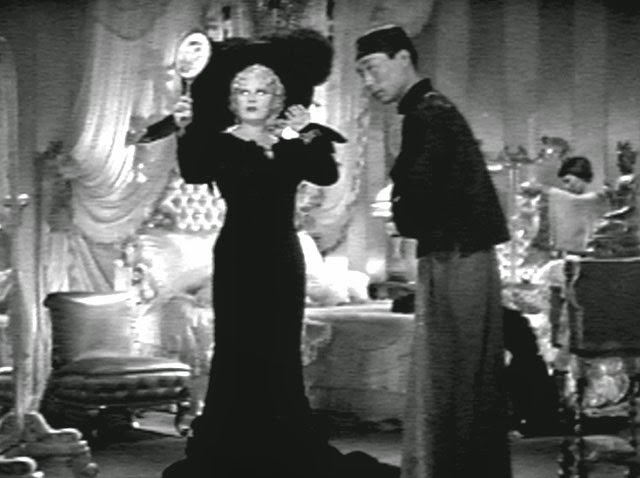 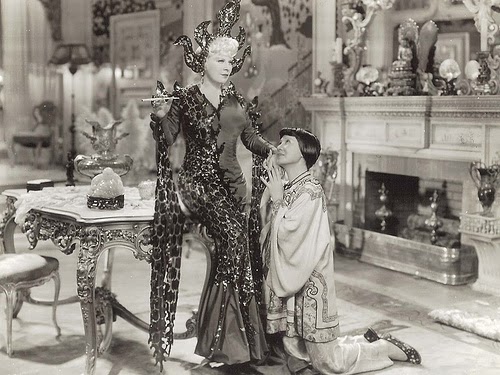 She sings with Duke Ellington's band in Belle of the Nineties (1934) and joins in singing a black spiritual later in the story.  That's another thing -- Mae could sell a song.  My parents had a Peggy Lee album.  One of her cuts on it was "My Old Flame."  Later, I learned that the song had been written for Mae West to introduce in Belle of the Nineties.

If another woman was down and out in a Mae West comedy, Mae's character helped lift that sister up.  She never did another dame dirt -- not unless that dame did her dirt first.  Mae had a unique look and a unique delivery.   She embraced diversity.  All that is evident in I'm No Angel. 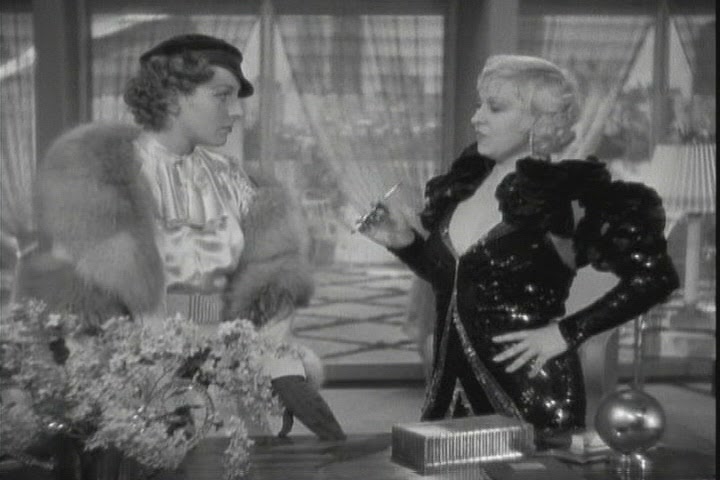 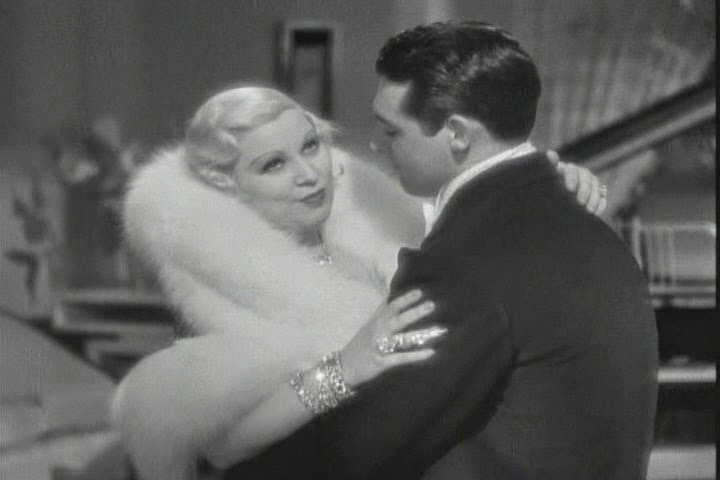 Watching I'm No Angel, it's easy to see why Depression Era movie audiences loved Mae West with her ghetto fabulous self.

Movie star, sex symbol and screenwriter.  And a full-figured blonde in her 40s.  She gave the censors a hissy fit with the material she wrote and she broke some new ground that needs to be re-appreciated again today.  Before the very calculated Madonna music videos of the 1980s, there was the warm wit of sexy Mae West in the 1930s.  And her one-liners hold up today -- especially those she wrote and delivered in I'm No Angel:  "I've been things and seen places," "Beulah, peel me a grape" and "It's not the men in your life that counts, it's the life in your men."

Mae West took the taboo subject of sex and made us laugh at it.  She was a woman who loved diamonds and men.  And when it came to men, she was always the smarter sex.  She played the game better than they did.  You'll see what I mean in the I'm No Angel courtroom scene. 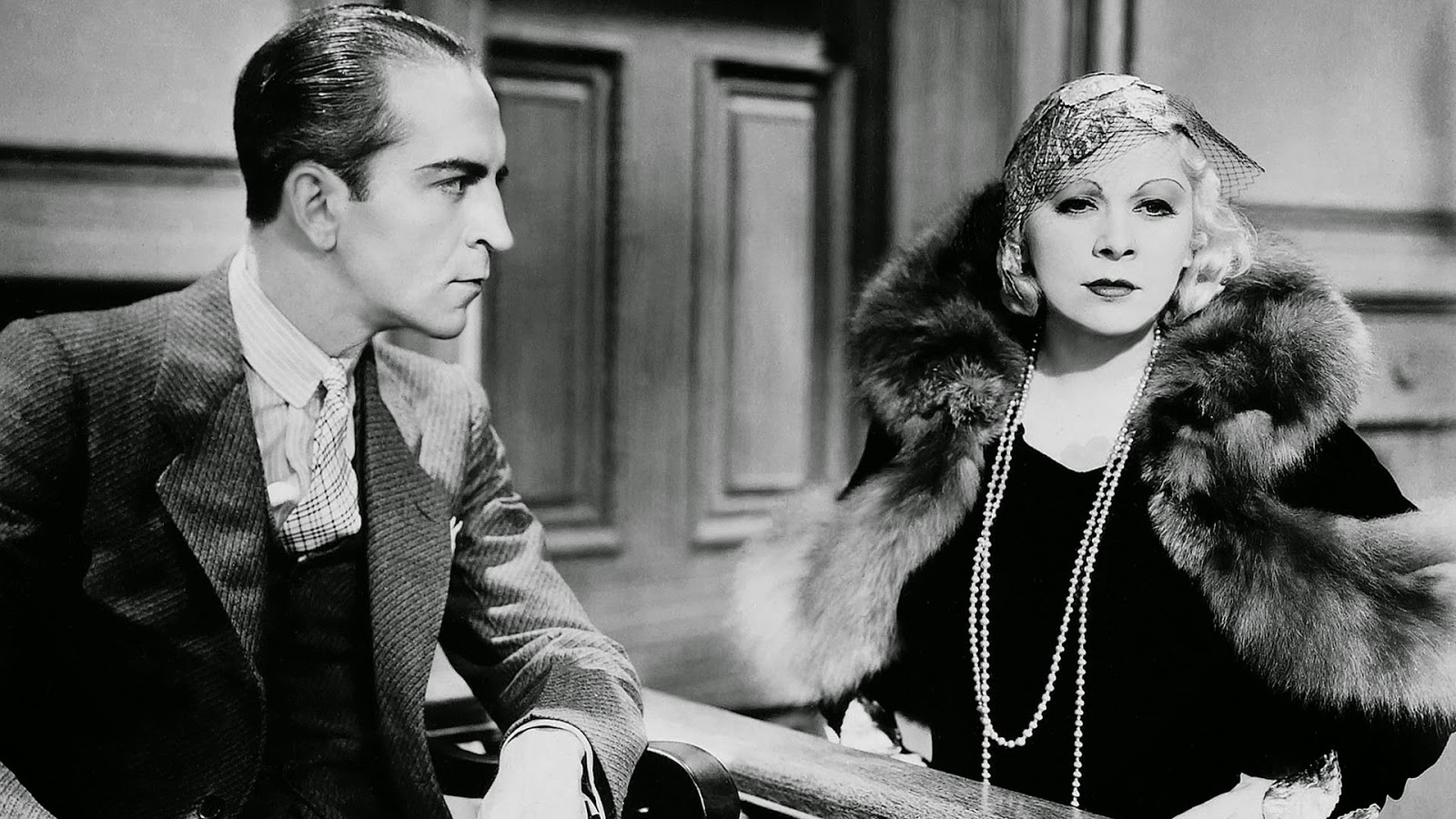 About West being an icon, I saw her caricature a lot in old cartoons on TV when I was a kid.  That's how I learned how famous she was. 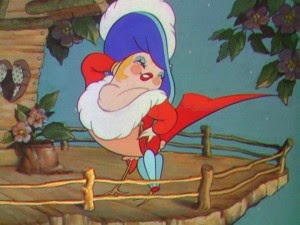 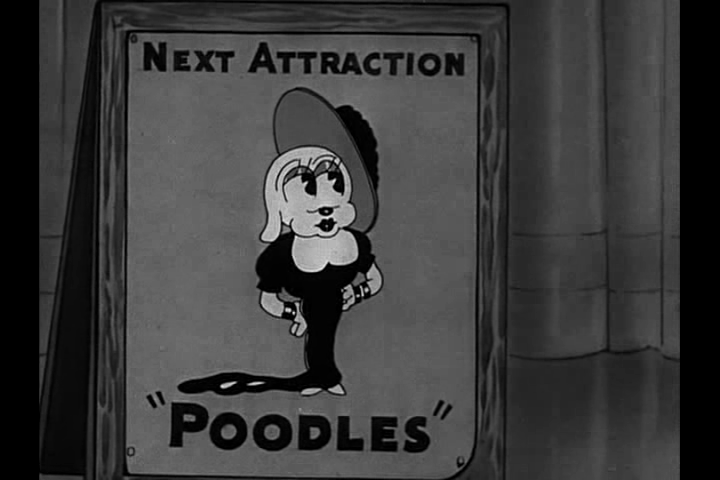 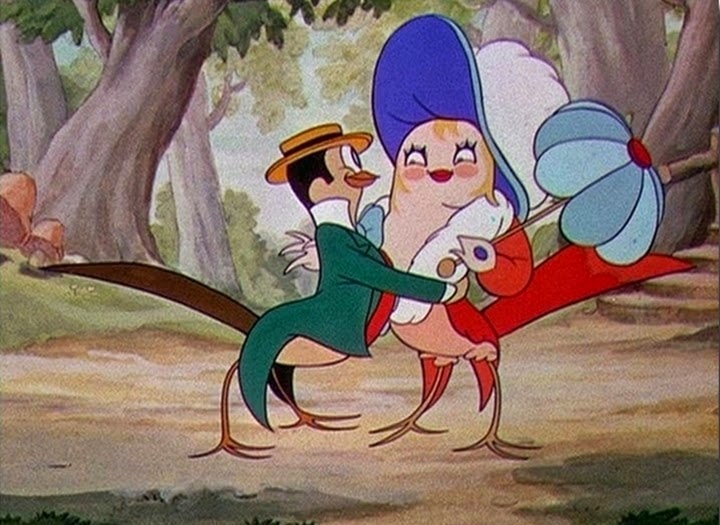 That image endured.  Little Janet Jackson did Mae West imitations on CBS.  Carol Burnett did a funny send-up of West on her Saturday night CBS variety show.  Did you know that Mae West did a special guest appearance on the Mister Ed sitcom in the 1960s?  Mae West with Mr. Ed, the talking horse.  Wow.  Catherine the Great of Russia would've been so jealous. 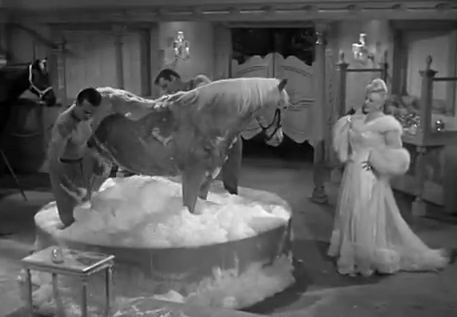 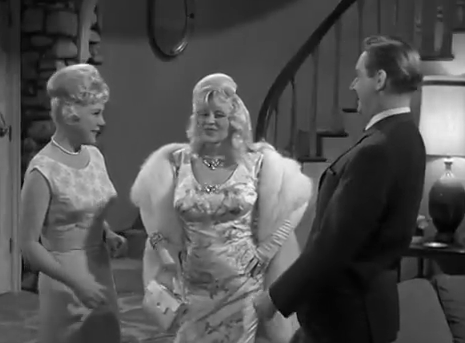 When I was a boy in Los Angeles, Mae West was on TV in her old movies, she appeared on a sitcom about a talking horse, she'd played Vegas surrounded by musclemen while she sang.... 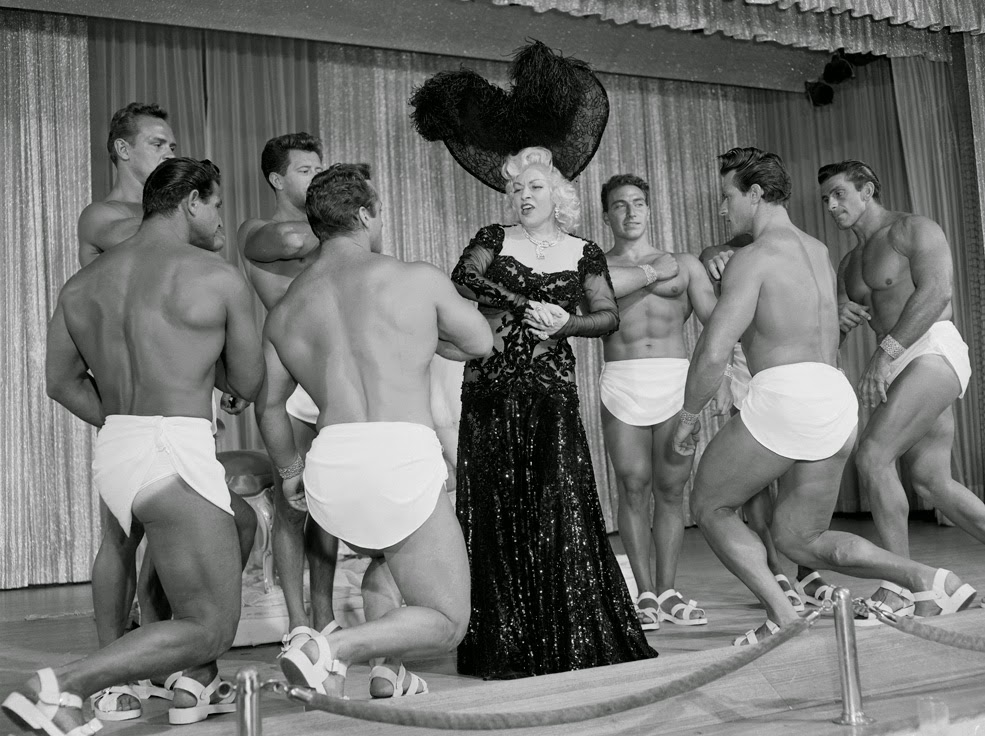 ....and she made juicy Hollywood news in L.A. papers during the anything-but-peaceful production of Myra Breckinridge.  The behind-the-scenes reports of diva moments involving Mae West versus Raquel Welch were funnier and more entertaining than most recent Adam Sandler comedies. 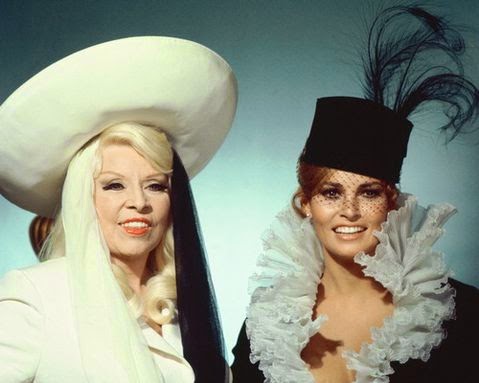 Mae was rewriting her part -- and altering her character's name -- in the movie based on the novel by Gore Vidal.  She changed her character's name from "Leticia" to "Letitcia." Raquel was playing a transsexual in Hollywood.  The tantrums on that set while making the 1970 film release were a goldmine for gossip columnists. 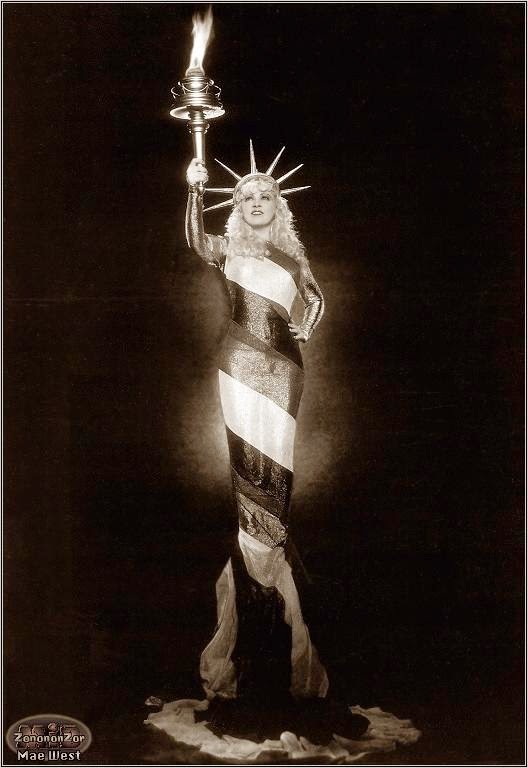 She was not about to let the new girl on the block, Raquel, get all the attention. 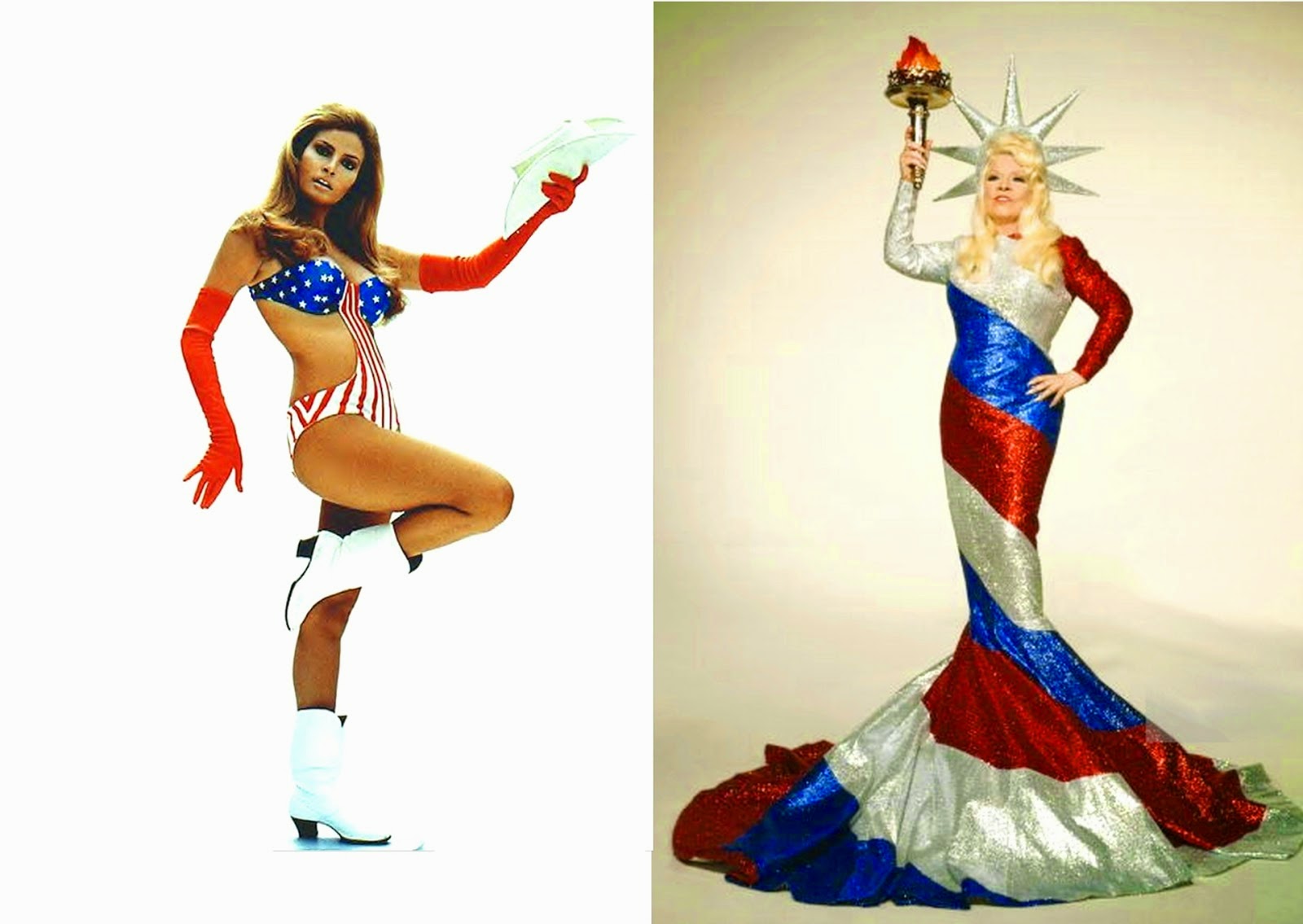