I hope this blog piece inspires comments from Marilyn Monroe fans.  I recently watched The Moon Is Blue for the first time.  In its day, it was a very popular romantic comedy directed by Otto Preminger.  The Anatomy of a Murder director was a producer of The Moon Is Blue on Broadway.  As a film director, Preminger didn't exactly have the George Stevens, Billy Wilder or Ernst Lubitsch flair for romantic comedy.  He couldn't bring a champagne cocktail fizz to a fluffy comedy like that.  Preminger was more a straight shot of Scotch guy.  He was blunt.   A dramatic story with twisted love, anger, sex and a murder?  That was good turf for Otto.  Think of his murder mystery, Laura, and his dramatic musical, Carmen Jones, which brought a historic Best Actress Oscar nomination to Dorothy Dandridge.  This isn't Preminger material.  It's like more of a Charles Walters project for Debbie Reynolds at MGM.  But that famed studio adhered to the prudish 1930s Hollywood production codes of language and visuals.  Those codes would start to weaken in the 1950s.  One thing that made The Moon Is Blue such a hot ticket is that Catholics were forbidden to see it.  A Catholic league that rated entertainment choices declared it "Condemned." Why?  The word "virgin" was said in it -- and not in reference to the Holy Mother.  If moviegoers heard the word "virgin" in a Hollywood movie before 1953, it was a Christmas story.  This time the word was used in reference to the wholesome yet passive-aggressive lead character played by the late Maggie McNamara.  She's an aspring actress who's more focused on finding a husband than she is on the craft of acting.  She allows herself to be lured to the bachelor apartment of a charming Manhattan architect played by a charming William Holden. 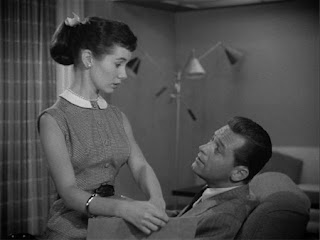 David Niven co-stars as an aging playboy and the architect's friendly rival. 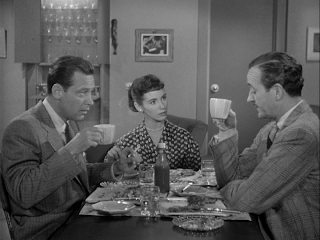 Not only does the architect say "virgin" about Patty, the pert TV commercial actress, the words "seduce" and "mistress" are also uttered in the onscreen banter.  The movie was banned in Boston.  The scandal helped this film version of a Broadway hit do well at the box office.  For her screen debut, Maggie McNamara received an Oscar nomination for Best Actress.  She lost to Audrey Hepburn for Roman Holiday.  Preminger's movie looks like it was shot in a month on a modest budget.  The theatrical roots show.  The action wasn't opened up.  Most of The Moon Is Blue takes place in the bachelor apartment and the characters talk, talk, talk.  Holden and Niven were pros at light comedy and they're to be admired for the heavy lifting they do here.  Take out those three titillating words that gave the Legion of Decency a hissyfit and you've got a script that's a pretty flat piece of wood.  Niven had better in 1939's Bachelor Mother with Ginger Rogers.  Holden had better in 1950's Born Yesterday, a fine example of a play that was opened up for the film adaptation.  Patty in The Moon Is Blue will guard her virginity like Fort Knox while making some guy's life so complicated that he'll relent with a "Marry me."  I couldn't warm up to that character.  I found her more bothersome and calculating than lovable.  Sadly, the talented Miss McNamara is not a widely-remembered movie actress today but she did get an Oscar nomination, which brings me to my point about Monroe.  She had two big releases for 1953.  In the trio of low-income girlfriends out to hook rich husbands in New York City, she was Pola.  Pola is a knockout of a fashion model with bad vision.  She's too embarrassed to wear her eyeglasses even though she sorely needs them.  She thinks glasses make her look like an old maid.  The comedy is How To Marry A Millionaire.
She's not the brightest bulb on the chandelier but very, very sweet. And gorgeous.

When ditzy Pola, leaving the ladies' lounge, walks smack dab into a wall because that's how blind she is without her glasses, it breaks me up every time.  Monroe was a fabulous screen comedienne.  Pola gets confidence in herself from a geek who also wears glasses.  She discovers that what she wants more than a millionaire is true love.  She finds it.  While she's on the wrong plane.  She boarded without wearing her glasses. 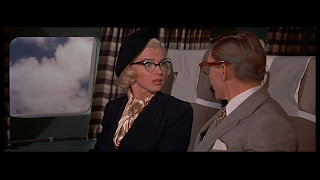 In How To Marry A Millionaire, Marilyn Monroe was a supporting player.  Lauren Bacall and 20th Century Fox veteran Betty Grable were bigger names.  In her other picture, Monroe was the star.  It was Gentlemen Prefer Blondes -- and she was what the gentlemen preferred.  In 1953, Marilyn did two variations on "the dumb blonde."  Pola is a sophisticated scatterbrain.  She'd like a rich guy.  But she falls for the working class nerd who makes her feel beautiful no matter how she looks.  Showgirl Lorelei Lee may not be an intellectual but she knows exactly what she wants and she knows exactly how to get it.  She wants a millionaire and true love.  She's a way more charismatic musical entertainer than Patty, the TV commercial actress.  She's a warmer, funnier, more lovable character.  She's loyal.  Her sidekick onstage and off is her best friend, Dorothy (Jane Russell). 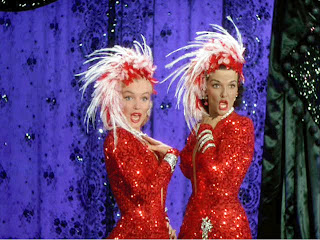 Lorelei is about as dumb as General Patton drawing up military plans in Sicily.  Her conquest will be a sweet nerd from a rich family.  Her weakness is diamonds, but no rock and no man comes between her devotion to level-headed and equally lovable Dorothy. 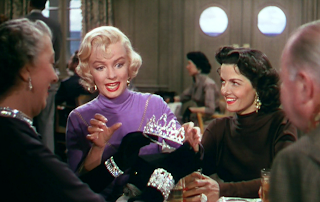 Monroe's comic timing in this movie is terrific. This was loosely based on a Broadway musical comedy hit starring Carol Channing as Lorelei.  New songs were added.  The script was tailored to fit rising movie star Marilyn Monroe.  In this, she proved again that she could handle light physical comedy.  Some of my favorite scenes in Gentlemen Prefer Blondes are the ones she has with froggy-voiced child actor, George Winslow. 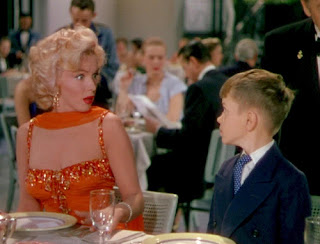 Her porthole scene with young Winslow is the quality of comedy work that Lucille Ball became famous for on TV's I Love Lucy.  In addition to her verbal and physical comedy, Marilyn Monroe shows her skills as a vocalist and a dancer.  She had a good singing voice, one that suited her onscreen persona.  She aced the complicated Jack Cole choreography --  especially in the deluxe "Diamond's Are a Girl's Best Friend" number. 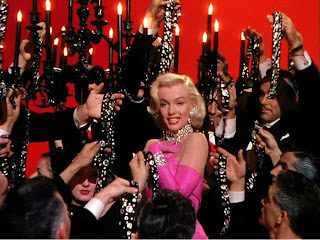 That is one of the top Hollywood movie musical showstoppers of the 1950s.  Madonna would copy it in one of her early '80s music videos.  Monroe's talent and star quality beam brightly and memorably in "Diamond's Are a Girl's Best Friend."  In general release, that number alone would've been worth the price of admission to see Gentlemen Prefer Blondes.  Yet, in her lifetime, Marilyn Monroe was more highly recognized as a sex symbol than she was an actress.  Comedy is hard work.  Musical comedy is even harder.  She was brilliant at both.  But those talents were overlooked by most movie critics. 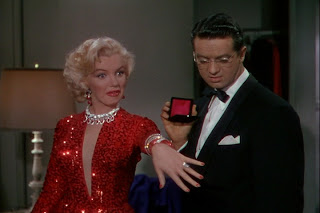 Maggie McNamara starred in one more big movie, Three Coins in the Fountain (1954), and then her film career quickly faded.  Marilyn Monroe would go on to Billy Wilder's Some Like It Hot (1959).  Imagine if Hollywood had given her the same regard it gave Maggie McNamara?  That validation may have given her more emotional security.  Monroe's work in those two 1953 film still shines and entertains.  People know it, reference it and can quote it.  Her "Diamonds Are a Girl's Best Friend" number is part of our pop culture.  And in 1950, she was a bit player having to hold her own opposite the formidable Bette Davis in the classic All About Eve.  Rent the two DVDs.  Watch McNamara's Oscar nominated work in The Moon Is Blue.  Then watch Marilyn in Gentlemen Prefer Blondes.  Both play musical performers in Manhattan, determined to find a Mr. Right to make her a Mrs.  Which one would you have picked to be in the 1953 Best Actress Oscar race?  Monroe never received an Oscar nomination in her legendary film career.  By the way, Carol Channing was a Best Supporting Actress Oscar nominee for her musical comedy turn in Thoroughly Modern Millie (1967).  About The Moon Is Blue, director Otto Preminger shot it more than once on the same exact sets.  Right before the happy ending kiss in the American version, an actor has a line and I was positive he looked familiar.  I was right.  It was the German star, Hardy Krüger, as a tourist atop the Empire State Building with his girlfriend.  Preminger shot a German version of The Moon Is Blue.  I think Preminger even used some of the same wardrobe. 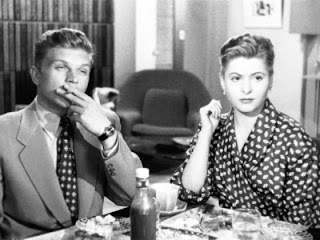 Krüger starred in it, taking on the William Holden role as the bachelor architect. 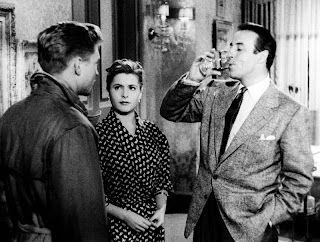 Johannes Heesters had a drink as the aging playboy played previously by David Niven.  He hit it big with Berlin moviegoers in the 1930s.  Also, the Dutch-born actor was stricken with the "compliment" of being Hitler's favorite actor.  Heesters made international news when he died last Christmas Eve at age 108.  Yes...108.  In 2005, he was still a working actor.  At the end of the 1953 German version, called Die Jungfrau auf dem Dach (The Girl on the Roof), William Holden and Maggie McNamara appear as the tourist couple on the Empire State Building observation deck.  American moviegoers saw Hardy Krüger in the John Wayne jungle action/comedy, Hatari! and the James Stewart drama, The Flight of the Phoenix.  If you've never seen his fine work and handsome movie star face, I recommend two of his foreign films.  He tries to outwit the Brits as a cocky, real-life German prisoner in the entertaining 1957 WWII British drama, The One That Got Away. 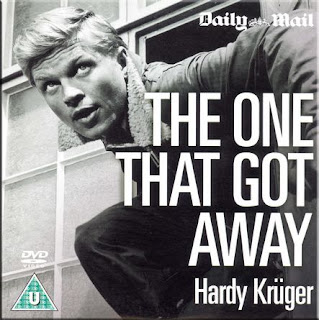 He's so unabashedly full of himself as he schemes to escape that he's fun to watch. 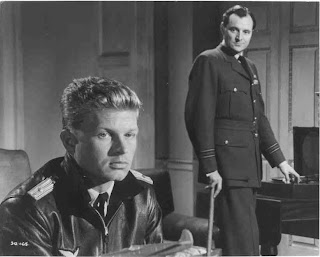 The other film is the acclaimed 1962 French film, Sundays and Cybele.  Krüger is excellent in this bittersweet tale of a mentally crippled Vietnam war veteran gradually brought out of his post-traumatic disorder by a schoolgirl he befriends and protects. 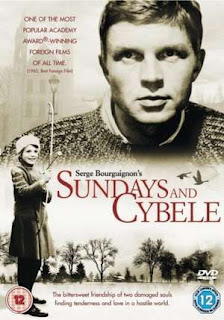