Sad but true.  The Iron Petticoat goes over like a lead balloon.  This 1956 film features an unlikely duo for a romantic comedy:  Katharine Hepburn and Bob Hope.  These two major stars did different kinds of comedy.  She was more Bringing Up Baby and Adam's Rib.  Screwball and sophisticated comedies.  He was more the gag-meister, never at a loss for a wisecrack in very funny "Road" movies with Bing Crosby and never above some broad vaudeville-like slapstick business in all his comedies.  The Iron Petticoat is a curiosity piece.  This 1950s Ninotchka knock-off is so clunky, so quirky that you just have to watch it at least once if you're a classic film fan.  Katharine Hepburn plays Captain Vinka Kovelenko, a distinguished Soviet army pilot who defects.  The thing is, Kate still sounds like she's doing The Philadelphia Story.  Hope plays the American officer in London assigned to introduce the Communist to the joys of capitalism.  Vinka defected to London because Russia kept making an issue of her womanhood.  The feminist pilot wasn't getting equal respect from male superiors.  The KGB wants Vinka back. 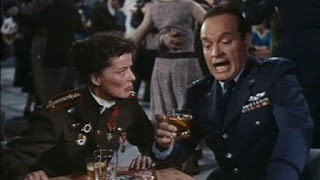 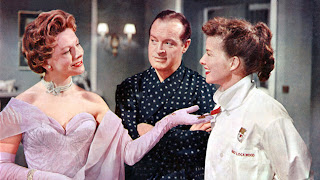 That's all you need to know about the plot.  Vinka will fall in love with Chuck.  Vinka will go shopping for "girly" clothes.  The Ben Hecht screenplay gives you a few smiles but no big laughs.  Kate seems to have leaped into the project with a "Just have fun with it, take the money and run" attitude.  When The Iron Petticoat does work, that's why.  Personally, I dug seeing her in the mannish military attire.  Kate rocked that Russian army drag. 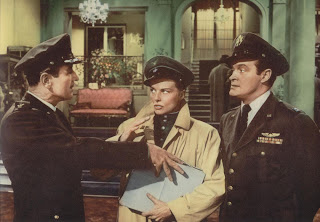 When Vinka gathers up her courage and goes to a boutique to buy sexy undergarments, that's pretty cool too.  When she gets all gussied up and arrives at a dinner party where she shows off some leg, she looks gorgeous.  Her Ninotchka-like fashion makeover is mighty fine.  Of course, Chuck's stuffy British fianceé will get her knickers in a bundle because she doesn't understand that he's following military orders. 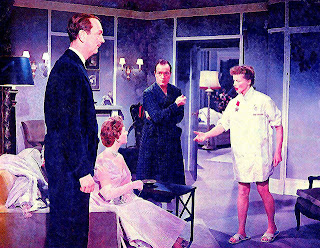 The Iron Petticoat was unavailable to American viewers for over 40 years.  It aired on local Los Angeles TV way back when I was a kid.  Then it was off the market due to legalities.  I was lucky enough to do a celebrity interview in London during my VH1 years.  I discovered that The Iron Petticoat was on television for British viewers and, later, on DVD for them.  A British buddy hooked me up so I could see it.  The comedy was as bland as I'd read it was.  The studio probably expected it to have a champagne fizz because of its two stars.  The result is more like seltzer water.  Hepburn supplies what little fizz it has.  Bob Hope, to me, was surprisingly flat.  In his comedies, leading ladies like Dorothy Lamour, Madeleine Carroll, Hedy Lamarr and Jane Russell were the eye candy and love interest.  Basically, they were the straight men to Hope.  In a vehicle like this, as in the sparkling Ninotchka starring Greta Garbo in 1939, the woman is the main focus.  Her transformation is the main attraction.  We wait to see that strict icy Russian thaw out politically and sexually, get a fashion makeover , then fall in love.  Hope never grew dramatically the way famed co-star Bing Crosby did.  Crosby, winner of the 1944 Best Actor Academy Award for playing a Catholic priest in Going My Way, went on to explore the dark side of his breezy persona and earn another Best Actor Oscar nomination.  He got it for the 1954 adaptation of The Country Girl as the alcoholic former singing star whose drinking and neediness emotionally drain his loyal wife.  Crosby was fierce and fantastic in that film.  He ended his acting career with another strong performance.  In a made-for-TV drama, he played a lethal Dexter-like character.  He's the small-town physician who secretly decides who should live or die in the 1971 thriller, Dr. Cook's Garden.  Crosby branched out.  Hope pretty much kept doing the same thing in his movies.  His role opposite Hepburn is a departure.  Hope's Capt. Lockwood is not Fancy Pants, The Paleface or The Lemon Drop Kid.  You get the feeling the comedian contacted his own team of writers to inject the script with some "Bob Hope" one-liners.  Those throw the script off-balance.  Vinka should not be the straight man to Chuck.  The Iron Petticoat might have been better if Hepburn had no Hope.  Perhaps a leading man like Van Johnson, John Payne, Bob Cummings or Alice Adams co-star Fred MacMurray would've been more at ease in Hope's military officer role.  The ski-nosed comedian was an NBC radio star, so we get a bit of "product placement" at the end.  But this Odd Couple romantic comedy didn't deliver the hilarity promised in the poster. 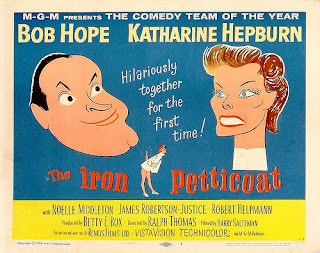 Whenever I see a caricature of Bob Hope, I wonder if young TV viewers realize that his face inspired the look of a character on the Fox animated series, Family Guy. 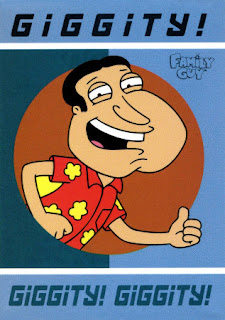 Yep.  Quagmire.  The guy with the hyper hormones.  As for the battle of the sexes in The Iron Petticoat, the Bob Hope and Katharine Hepburn Cold War comedy premieres on TCM (Turner Classic Movies) Thursday, November 29th at 8pm ET.  It's finally defected to American DVD so hardcore classic film fans here in the U.S. can now see it. 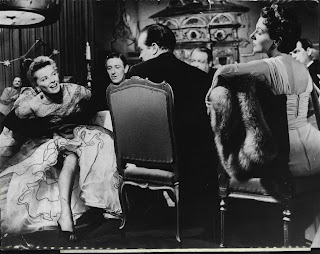