"It's the perfect night for mystery and horror.  The air itself is filled with monsters."  ~Elsa Lanchester as Mary Shelley in Bride of Frankenstein, directed by James Whale. 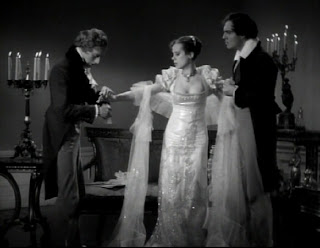 Watching this horror classic has become a personal Halloween tradition for me.  I loved it as a kid when I saw it on TV.  I love it more now as an adult who can see it restored and remastered on DVD.  I can also appreciate it more.  James Whale's Bride of Frankenstein is a witty, sly, spooky look at death.  It also has a strong case for same-sex domestic partnership rights in a movie made a good half-century before such rights became a steady part of our national dialogue.  Universal's 1931 release, Frankenstein, was a big hit and groundbreaking horror movie that introduced audiences to a new monster.  James Whale's film was such a hit that a sequel went into production for him to also direct.  Here we have a example of a science-fiction/horror sequel that's as good, if not a bit better, than the original.  We'd see another example of this with the 1986 release of Aliens, the sequel to the groundbreaking outer space horror classic, Alien, from 1979.  Bride of Frankenstein opens with three friends chatting in a castle on a pitch black night as a thunder and lightning storm rages outside.  The friends are writers -- Lord Byron, the poet Percy Shelley and his Mrs. Shelley, author of Frankenstein.  Lord Byron recaps that story so moviegoers see a quick montage of scenes from Whale's previous film before they're escorted into the new one.  Dear Mary Shelley tells the gentlemen what happened after her first installment.  She adds that she meant her story as a moral lesson about "...the punishment that befell a mortal man who dared to emulate God."  The man is obsessed scientist, Dr. Frankenstein.  We thought he'd died in the first movie.  Turns out he only suffered a flesh wound when he was hurled from the top of a mill.  He's back -- and still engaged to the genteel Elizabeth. Colin Clive returns as the doctor. 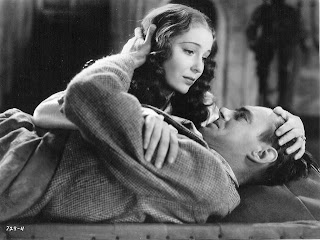 His obsession with death and recreating life scares Elizabeth.  She gets even edgier when the mysterious Dr. Pretorius drops by.  You can't blame her.  He's a shady Gothic queen who wants to discuss "a secret grave matter" with her beloved.  Pretorius provides campy laughs and chills.  He's a grave robber with a  savage disregard for human life. 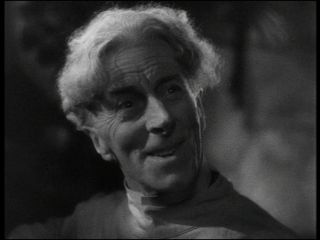 He's more of a monster than The Monster.  Notice details of the art direction.  Dr. Pretorius is framed near a skeleton or parts of a skeleton as he unravels his dark plans. 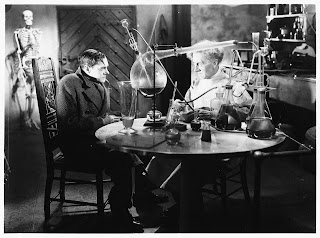 Fabulous work from Ernest Thesiger as the freaky scientist who makes mini-beings. 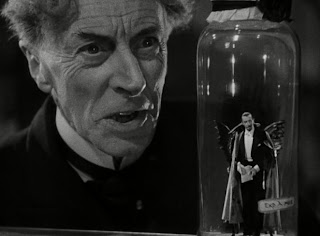 His plan for The Monster is this:  "We will create his mate."  He cons Dr. Frankenstein into a commitment and pulls out some gin to toast their association:  "To a new world of gods and monsters!" The Monster is still unhappily caught in the village full of conservative, dimwitted villagers.  He's a massive brawny male who pretty much keeps to himself, doesn't make small talk, always wears black and is harmless except when crossed.  He's like a transplanted native New Yorker.  He leaves the village, basically seeking a good meal.  He wanders into a gypsy cookout and politely wants to sample the roast  fowl when things go awry again because of fear-mongering conservative villagers in a mob. 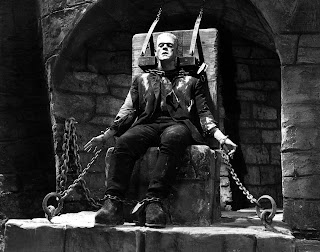 He's angry, he's lonely, he's hungry.  He escapes and heads back into the woods where he feels comfortable.  He hears beautiful music coming from a violin.  The Monster finds a friend in the woods.  An older bearded gentleman is playing the violin.  He has a cottage.  Although blind, he's decorated it quite tastefully and lives by himself.  He, too, is lonely.  He invites the stranger into his cottage.  The Monster's anger quickly fades away as the compassionate older gentleman treats him to food, wine, classical music and a quilt.  No one's ever been kind to The Monster like this since he was assembled and brought to life. 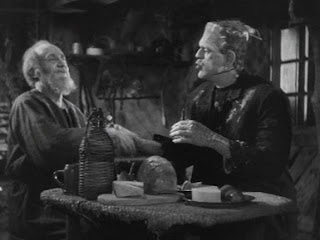 The Monster is tired and wounded, physically and emotionally.  The blind man tenderly sits him on the bed and covers him with a quilt. Soon, the two males are holding hands.  A tear rolls down The Monster's face.  The blind man says a prayer of thanks to Heaven for sending that big hunk of a man-creature into his life to end his loneliness. 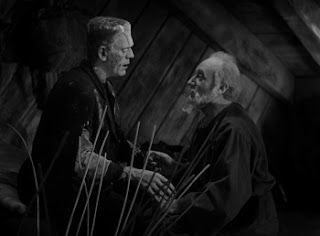 I would have done the same, exact thing.  The Monster utters, "Alone...bad.  Friend...good."  He and the blind man live together in the cottage and have a nice, quiet life until conservative men from the village wreck everything with guns and ignorance.  The Monster is separated from his peaceful, Schubert-playing violinist domestic partner.  He's once again restrained by ignorant conservative attitudes.  He's once again angry. 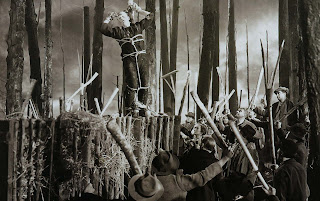 Whale composes Dr. Pretorius in camera shots with a skeleton or parts of a skeleton.  Notice that he places The Monster before or next to a Christian symbol -- the crucifix.  There's one on the wall behind him as he sits on the blind man's bed.  One is seen near him as he charges back underground in the graveyard to escape harm from the villagers. 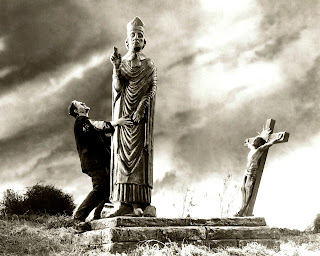 He finds Dr. Frankenstein and wicked Dr. Pretorius.  The lonely monster will enter into an arranged scientific marriage with a once-dead woman he doesn't know.  The doctors create "the Bride of Frankenstein."  Elsa Lanchester now appears in a second role. 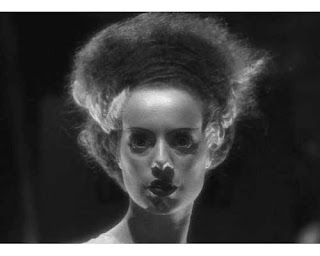 Things don't go nearly as well with the bride as they did with that gentle bear in the woods, the blind man.  This movie is practically Brokeback Monster.  Tragedy ensues. 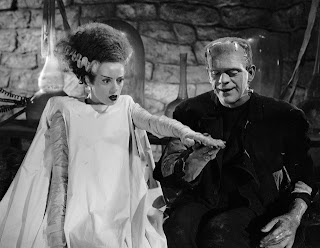 It is not love at first sight when she sees him.  The arranged union with this female is a disaster.  The Monster learns the moral lesson that Dr. Pretorius has not.  Frankenstein's creation declares, "We belong dead" and ends the madness in the laboratory. 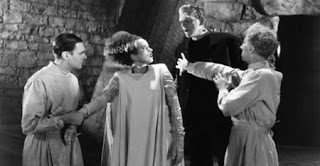 If James Whale has directed and released this sequel today, he'd be getting lots of personal attention from entertainment press.  The Englishman was an openly gay film director at a time when it was still considered taboo to one's Hollywood career to be "out."  He knew how it felt to be different and an outsider.  Whale contributed greatly to the horror genre.  In the Boris Karloff performance as The Monster, especially in the sequel, Whale brings out a sensitivity.  We have sympathy for the creature.  In the film's visuals, there's a delicious blend of the Gothic with a touch of art deco.  The looks of the Frankenstein monster and his "bride" endure as two of the most iconic in Hollywood classic horror film history.  Clever, how we first see Elsa Lanchester as a controversial horror novelist discussing her craft with two Romantic poets.  The woman and two men add light to the arts with their literary work.  Later, she's the female creation of two men who have abused their scientific talents and taken them to the dark side.  There's comic relief in this movie.  James Whale has fun with death in Bride of Frankenstein.  Seeing this film makes Young Frankenstein, the brilliant and affectionate 1974 send-up of the Frankenstein franchise, even funnier.  Gene Wilder, Peter Boyle and Madeline Kahn star. 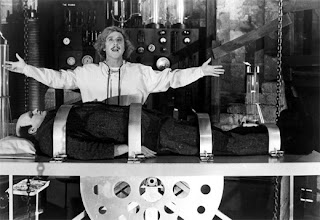 Much of Whale's sequel is spoofed in the comedy written and directed by Mel Brooks. 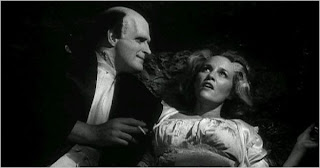 We see the making of Whale's Bride of Frankenstein in the film, Gods and Monsters. 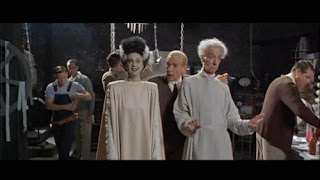 Sir Ian McKellen received a Best Actor of 1998 Academy Award nomination for his portrayal of the unique, unconventional Hollywood director in his later years. 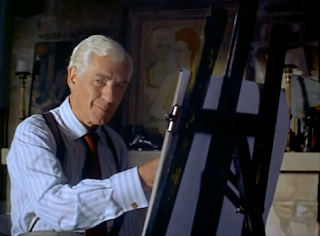 Watching Bride of Frankenstein on Halloween was, once again, delightful.  Not only is it a lively horror movie about death, it's a plea for tolerance and true Christian behavior.