"Life is banquet and most poor suckers are starving to death!" ~Rosalind Russell as Auntie Mame.

I just got off the phone with my mother.  Movies are so much a part of our conversation, especially now that she's in convalescent care.  We laughed a lot.  I told I'd had such a hectic weekend that I could use a drink at the moment.  Mom said, "Like a beer?"  I replied, "No, honey, I need something stronger -- like an Auntie Mame drink."  My mother let out a big hearty, high belly laugh.  It made her sound like she was strong enough to strut out of that joint, carrying her own suitcase as she did. She knew exactly what I meant when I referred to the 1958 film version of Russell's Broadway triumph. 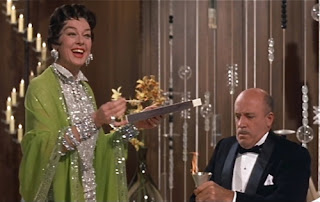 When I was in grade school, that film played on local L.A. television one weekend night.  It was the KHJ/Channel 9 "Million Dollar Movie."  That night I discovered my mother loved Rosalind Russell. My late dad usually controlled the TV.   Instead of a network western or a cop show,  Mom kept the TV on the station that is now KCAL while Dad relaxed in his armchair.  Auntie Mame was so lively, so fun, so festive.  Even when she stood still, she seemed to be in motion.  Like Lucy Ricardo only more sophisticated and elegant.  That hooked my little kid interest.  The movie seemed colorful.  This was back in the day when pretty much all of us in the neighborhood had a black and white TV set.  Way back in the day.  No color and you had to get up and walk over to the TV set to change the channel.  Today, my young nephews would call that "pre-historic."  I had never seen my mother laugh so hard at a movie.  She laughed at Auntie Mame the way I laughed at cartoons.  Her laughter was infectious.  What a fun night that was.  Dad and me laughing at Mom laughing at Auntie Mame wearing noisy jewelry backstage before an entrance. 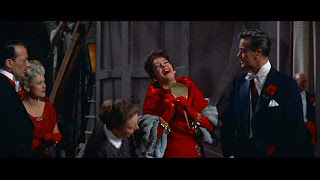 Mom got laugh hiccups watching Mame and her best girlfriend, serious stage actress Vera Charles, go at it.  Mame and Vera made my mother laugh so hard that she cried. 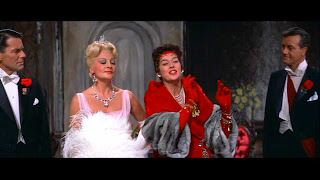 Then she cried touched by the sentiment of Mame's little nephew, Patrick, loving her when life broke her heart making her feel useless, unimportant and alone. 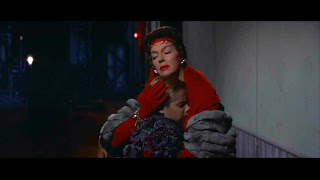 Last year at this time, I didn't feel like I had a laugh left in my soul.  The Recession made me feel useless, unimportant and alone.  There had been friction between my mother and me for quite some time.  Her criticisms of my life and career were as cutting as they seemed to be irrational.  They were sharp little unrelenting stabs to the heart.  And they didn't stop when I was so broke, so unemployed that I lost my New York City home.  I unloaded my belongings and moved into the spare room of a buddy's place in San Francisco.  It was a place to live and there was a strong possibility of a part time minimum wage job in his office.  When I got to San Francisco, that job possibility disappeared.  I spent nine months trying to find something -- anything.  Job hunting there was like walking in the city, a constant uphill experience.  I left San Francisco to move in with my dear younger brother and attempt to start over yet again.  I was here with him and his family when we almost lost our mother the day after Christmas.  Our sister got her to the hospital right in time. Mom was in bad shape. Her legs were disabled.  If I ever got a memoir book deal like Tom Bergeron, Rosie O'Donnell, the original MTV veejays or even Clay Aiken of American Idol fame, I'll write the details.  I will tell you that our mother had some serious health issues.  There's been sweet recovery in more than one area.  A long-undetected physical condition had affected her behavior.  It made her reclusive and mean.  Stricken with that condition, she refused to let me live with her in her house.  So I went to San Francisco.  When doctor's cleared the condition up, it was as if she'd been freed from a bad magic spell.  She's in her 80s and still infirm but there's so much clarity and kindness about her now.  She's like she was when I was a kid.  She's given me great advice, great support, she really listens to me, she shares her true feelings and she makes me laugh a lot.  My mother is my #1 fan and fully believes that I will be back in the TV workforce soon.  I think I've become a better son to her since her health crisis.  I'm more attentive...and kinder.  She's way more special to me than all my belongings and material goods that I was forced to give to the nearby Salvation Army.  Last year, life knocked us both down.  This year, Mom and I have been helping each other back up.

Just being able to share a belly laugh with Mom today for a few minutes on a long distance phone call was like an early Christmas gift.  Especially considering how close to death she was the day after Christmas last year.  Auntie Mame was right.  Life is a banquet.  Even if we don't get a full plate, we can still savor and appreciate a small portion of it.  That small portion is better than nothing at all.  Know what I mean?  Cheers. 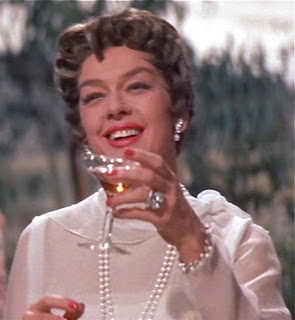