One of the best and brightest gal pals to liven up many a classic Hollywood movie with her wry asides and wisecracks was actress Eve Arden.  Her presence made a good picture even better and a mediocre movie worth watching.  If she couldn't save a picture, it wasn't worth saving.  Like Oscar Levant and Thelma Ritter, Eve played supporting characters with charisma.  We loved her.  In movies like Cover Girl, Mildred Pierce, One Touch of Venus and My Dream Is Yours, she was the competent smart gal who was just "one of the guys" and didn't have a man of her own...even though she was a babe. 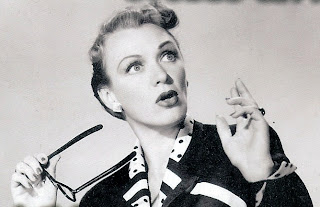 I loved her as Mildred Pierce's trustworthy business partner and voice of reason.  Opposite Joan Crawford, star of the film, Arden picked up a 1945 Best Supporting Actress Oscar nomination as Ida.  Eve's Ida was kind of friend you'd want to have.  She hires Mildred and helps the divorced mother start a new life.  Ida is hip to Veda, Mildred's Wicked Witch of the West Coast daughter, before Mildred fully is.  Ida:  "Personally, Veda's convinced me that alligators have the right idea.  They eat their young." 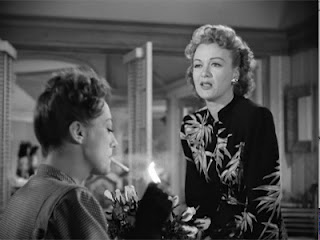 She could go from physical comedy with Groucho Marx in At The Circus to getting all dolled up and tossing out sophisticated comedy lines like a pro as the "right hand man" to a top fashion magazine editor in Cover Girl.  Rita Hayworth and Gene Kelly were the stars.  When Eve was in scenes with each star, you've got to admit...she stole the scene. 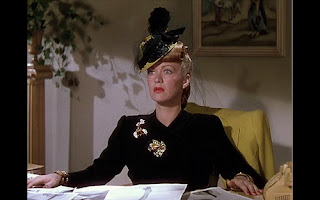 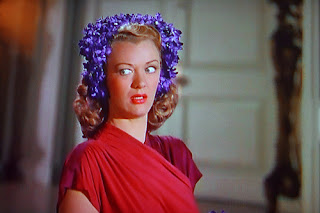 If Eve Arden had scored a second Oscar nomination, it should've been for the role in which she got to exercise her dramatic skills.  She does make you laugh but you laugh at how narrow-minded and irritating this "Christian" woman is.  Aunt Lottie is suspicious of Catholics and Jews.  She's a member of the 1920s Oklahoma family we meet in the 1960 Warner Brothers movie, The Dark at the Top of the Stairs.  Like the movies Come Back, Little Sheba with Shirley Booth, Bus Stop starring Marilyn Monroe and Picnic, The Dark at the Top of the Stairs was the film version of a hit Broadway drama written by William Inge.  Inge also wrote the screenplay for Elia Kazan's acclaimed film, Splendor in the Grass.  If this picture starring Robert Preston, Dorothy McGuire, Angela Lansbury and Eve Arden aired in prime time tomorrow night, elements of it would feel relevant.  There's new technology, companies are going bankrupt and experienced middle-aged workers are being laid off.  There's age discrimination and they can't find new employment.  As in other Inge stories, this has that low constant horsefly buzz of sexual discord that builds and builds.  The sexual conflict in Rubin Flood's family is the dark at the top of the stairs.  This movie aired frequently on local TV's "Late Show" when I was a kid in Los Angeles.  I loved this movie.  I saw a friend's VHS copy recently and fell in love with it all over again.  Especially now in this bleak Recession.  The story opens at the break of dawn.  We enter an upstairs bedroom that sunny morning.  A brawny, lusty mature man is in bed with the woman he loves.  His wife.  He's in a romantic mood.  She turns him down.  Again.  Meet Preston and McGuire as Rubin and Cora Flood. 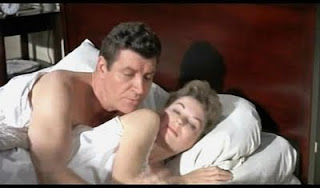 She always has an excuse.  She pushes her husband away and keeps their little boy too close.  She has no idea that Rubin's feeling "Life is closing in on me."  He hasn't told her that he got laid off from work.  There's a single woman in town, a hairdresser, who turned her home into her business.  She's an independent, warm woman.  Not given to gossip.  She's polite, professional and honest.  Mavis and Rubin are good friends.  He's never cheated on Cora.  But if he ever approached Mavis to get the kind of attention and comfort he doesn't get upstairs at home anymore, she would not turn him down. 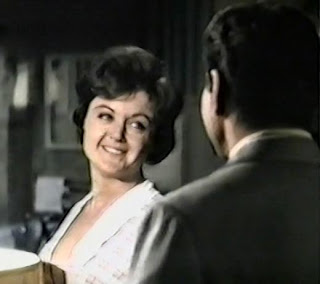 This is one of those Lansbury performances that makes you wish Hollywood had utilized her more.  She brings such likable dimension to this real woman.  Mavis doesn't intrude into anyone's personal space and she doesn't live her life within anyone else's margins.  It's interesting to see her and Preston together.  Both had worked in top Hollywood films alongside big stars in the 1940s and '50s but it was a Broadway musical comedy that made each a bigger star than any Hollywood movie ever did.  He was The Music Man in 1957, a role he reprised in the Warner Brothers film.  In 1966, she was Mame, the musical version of Auntie Mame, the play and movie that starred Rosalind Russell. 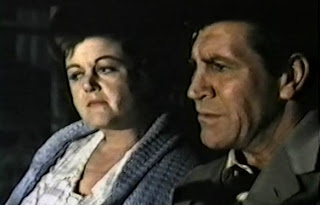 There's tension between the parents due to lack of money and lack of sex.  But Rubin and Cora's treasure of a daughter, Reenie, is falling in love for the first time.  A sad young cadet makes her feel pretty.  Mr. and Mrs. Flood like him a lot.  But others in town aren't so kind to Sammy Goldenbaum simply because he's Jewish.  ( As Sammy, the gifted new screen actor, Lee Kinsolving, showed great promise.  He made only two movies.) 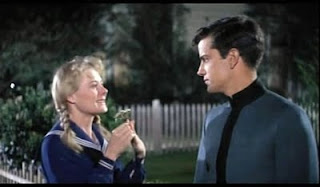 Shirley Knight, known to many today as the cheerful mom to Helen Hunt's character in As Good As It Gets, was a Best Supporting Actress Oscar nominee for her wistful, lovely work as Rubin and Cora's shy teen who discovers that life isn't air and her family isn't perfect.  Reenie learns to embrace life.  She reaches out to mend Sammy's broken heart. 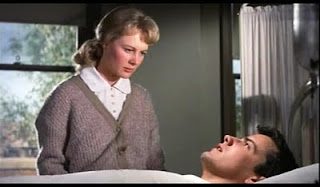 Her Aunt Lottie and Uncle Morris come for a visit at her mother's invitation.  Cora wants to see Lottie.  Rubin would sooner have jock itch than endure a visit from sister-in-law Lottie.  She sticks her nose in everybody's business.  She's an overbearing blabbermouth.  She's a bigot.  She's practically robbed her poor husband of the will to speak. 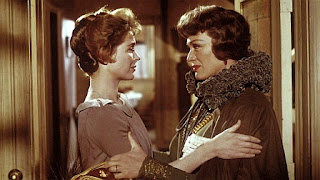 It's unusual to see Eve Arden, a funny lady on film who starred on a hit 1950s TV sitcom (Our Miss Brooks) take on a role more suited for an Eileen Heckart type.  Heckart originated the role on Broadway.  But Arden makes it work.  Lottie is a combination of loving sister yet she's totally clueless as to how annoying she is to the men in the house. She believes in the ignorant things she's heard about other cultures and can't understand why others don't believe them too.  She holds herself like a proper high school teacher.  Smiling with pursed lips yet really intolerant of her students. We want to cheer when, during Lottie's rude prattle about Catholics, Rubin roars "Horse manure!  Woman, you ought to get yourself a broom and ride over the housetops!  You ought to buy yourself a sheet and poke two holes in it and go around setting fires!  Or, better yet, get yourself a big piece of tape and put it over your mouth because you're too ignorant to live!" 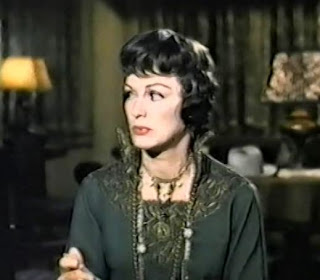 Upstairs, alone with her sister, the blabbermouth reveals a quieter, wounded side.  There's darkness in her marriage too.  Sexual dissatisfaction.  Sexual alienation.   Loneliness.  A lack of passion.  Lottie reveals to Cora that she'd "love a good fight" with her emotionally distant husband.  The actress plays the heartbreak of this character.  If you're an Eve Arden fan, you must see this movie.  The pro at playing the wisecracking "right hand man" gal pal who couldn't get a guy flips her image.  She's married.  She got the guy.  But saying "I do" didn't equal "happily ever after" and it didn't guarantee sexual bliss.  I feel that this is one of her best screen performances.  She makes Lottie both infuriating and touching.  Directed by Delbert Mann (Best Director Oscar for 1955's Marty), the movie is well-played and well-cast.  I could hear faint strains of my parents' voices in the squabbles Rubin and Cora had.  Especially those about money.  Maybe that's what drew me to this drama in my youth.  There's a nice coziness and warmth to Mann's movie.  The big, earthy, compassionate papa bear Rubin character was a good fit for Robert Preston.  Dorothy McGuire makes Cora sexually unavailable without coming off as a drab, sexually undesirable housewife.  And Eve Arden -- she shines dramatically in 1960's The Dark at the Top of the Stairs.  Warner Bros., get this movie on DVD!