Notes on THE MASTER

There is some magnificent acting in The Master, directed by Paul Thomas Anderson (Magnolia, Boogie Nights, There Will Be Blood).  First of all, there's Joaquin Phoenix as the hard-drinking and physically abusive WWII Navy veteran, Freddie Quell.  This guy is frayed.  Something eclipsed his heart and the stuff he drinks isn't doing a thing for his emotional stability.  He will drink just about anything as long as it burns.  The movie opens when he's still a sailor in the Pacific and we see him basically castrating a tree.  He climbed up a tree and whacked off two big coconuts.  That sure looked symbolic to me. 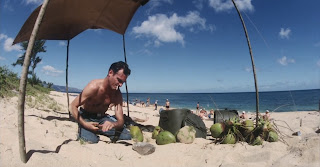 There's romantic deprivation on the island.  These seamen need sexual relief.  If this was a musical, the sailors would've sung "There Is Nothing Like A Dame" here.  The story continues as brilliant Phoenix gives us some of the most memorable posture and body language of any original human movie character we've met on the big screen this year. 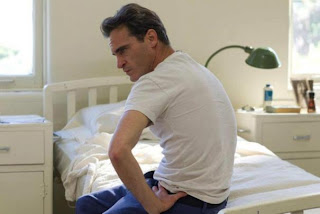 You almost expect Freddie Quell to break out into a solo of "I'm a Little Teapot." Not since Best Actor Academy Award winner Yul Brynner in 1956's The King and I  has an actor gotten so much mileage out of aggressively walking around with arms akimbo. 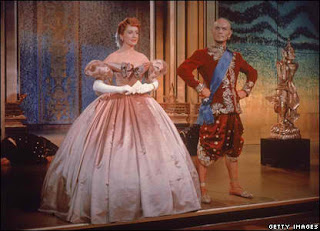 And then there's Philip Seymour Hoffman as the equally hard-drinking but way more sophisticated guy who is The Master, the founder and leader of a cult-like group that hints at Scientology.  Hoffman is extraordinary as the co-dependent, charismatic charlatan. 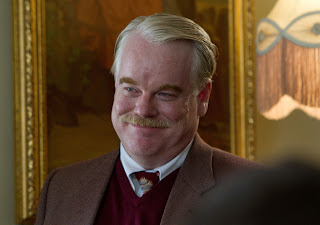 I had this thought during Hoffman's last five minutes in the film:  Not that we need it, but if there was a big screen remake of Gypsy, he should play Rose's boyfriend, Herbie.  Think the "You'll Never Get Away From Me" number.  Then there's gifted, wide-eyed Amy Adams as the iron butterfly, Mrs. Lancaster Dodd, wife and master of The Master. 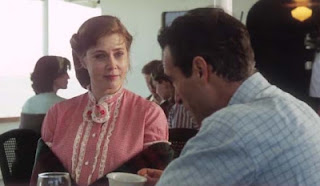 The angry, loveless drifter latches on to The Master's philosophy with dark devotion.  He'll beat up anybody, any skeptic who criticizes The Master or questions his credibility. 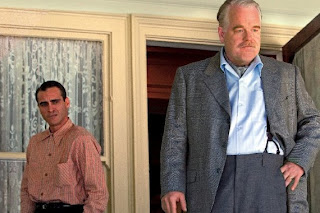 Master Dodd takes to mentally unsteady Freddie like a son.  Mrs. Dodd is wary.  Yes, the acting is brilliant -- and when this drama ends, you say to yourself, "What the hell was that all about?"  This is intellectual fare.  An art film, if you will.  Did you ever see the Preston Sturges 1941 classic, Sullivan's Travels?  This new Paul Thomas Anderson feature made me think of the comment Veronica Lake as The Girl makes about art films in that 1941 screwball comedy:  "There's nothing like a deep dish movie to drive you out in the open." 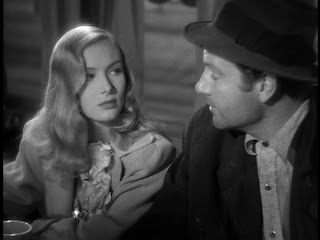 I'm not telling you more about The Master in case you want to see it.  I will tell you that, after I sat through it, I really needed to see something like Sullivan's Travels or The King and I.  Something less highbrow, something more understandable, something that seemed to have a definite point.  I went to see Argo.  Loved it.  I'm not quite sure what point director/writer Anderson was trying to make in Freddie's  friendship with Lancaster Dodd, but I think the sight of Freddie whacking off those two large hanging coconuts in the beginning of The Master was a big clue.  And the acting was great.  Did you see it?