I once spent a half hour with Spartacus.  What a stimulating experience that was! 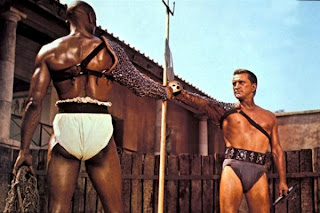 Let me explain.  I got my own prime time half hour talk show on VH1 in the late 1980s.  My sole guest for my premiere edition was the legendary star of Spartacus, actor Kirk Douglas.  I absolutely, positively, totally loved doing that show with that crew.  I did most of my own research.  We didn't use cue cards or teleprompter.  I was so lucky to have had the opportunity to interview Kirk Douglas and other top talent in the arts.
Films are my passion.  Especially classic films.  Talking to those who act in, direct and write movies is my idea of heaven on earth.  Talking about movies excites me.  I also love hosting and acting on camera.  I've been really lucky to book national TV work.
I write "really lucky" because -- as some of you friends of mine know -- I've not had broadcast representation for most of my career.  Agents who handle TV hosts, reporters and contributors repeatedly turned me down for representation or signed me with little or no activity thereafter.  I was with one top NYC broadcast agent for two years.  Not a single audition or meeting.  Four weeks before our contract expired, he called to say that he had a job lead for me.  It was, and I wrote this down, "a sports anchor job somewhere in the Deep South."  I kid you not.  That's all the Deep South needed -- me on local TV saying "Hello, Dixie! I've got two words for y' all tonight -- Ice Capades!"  Another broadcast agent approached me, signed me, then unexpectedly dropped me claiming, "I can't get you work.  You're getting older and you're not a celebrity...like Fred Willard."  Two months after that, without an agent, I signed a contract to host Top 5 on Food Network.  The show aired weekly on Food Network for six years.  In 2008, when Top 5 aired Monday-Friday mornings in repeats, a very middle-aged veteran New York City agent contacted me to come in for a meeting "a week from today." I'd snail mailed my headshot/resumé and emailed a link to my demo reel.  A week later, she opened our afternoon meeting by asking me if I'd ever done any TV hosting.  All of these broadcast agent encounters caused me to make that "Lisa Shay face" known to all who watch Suburgatory on ABC. 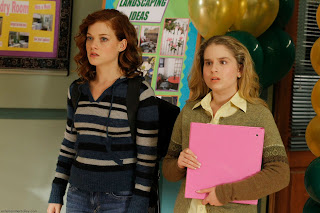 That's Lisa on right, holding the pink notebook and staring in disbelief next to her friend, Tessa.  I really went "Lisa Shay face" back in 1999 when that agent wanted to pitch me for a sports anchor job on a local TV news program below the Mason-Dixon Line. 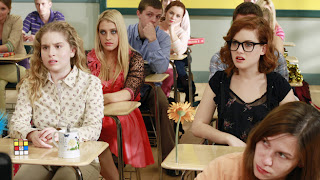 That's Lisa on the left with the Rubik's cube on her desk.  Behind her sits Dalia.  Dalia is to Lisa what those broadcast agents were to me. So, booking TV work has been a formidable task for me during most of my career because I usually didn't have anyone helping me get auditions and non-sports anchor job meetings.  "I wouldn't know what to do with you," "I don't handle New York talent," "Have you ever done entertainment reports?" -- I've heard them all from broadcast agents and TV news producers. I tried to get an entertainment contributor spot on CBS Sunday Morning or Good Morning America.  No luck.  I tried to get auditions for the kind of game shows you saw Tom Bergeron or Drew Carey host.  No luck.  I wanted to host another talk show like the one I did on VH1.  No luck.  See what I mean?  Seeking TV work on your own, without the luxury of representation, isn't easy.  I'd openly weep with joy if I could've made in 2012 so far what Honey Boo Boo makes per episode on The Learning Channel.  But I didn't give up.

Then...a drop of rain on this mean desert of unemployment I've been stuck on for well over a couple of years.  A producer in New York who is a fan of my work felt I should be considered to host a film-related talk show pilot.  In the spring, I auditioned via Skype from here in the 'burbs of Northern California.  It was my first audition via Skype.  It felt very George Jetson.  Things progressed.  There were some major monkey wrenches hurled into the production but we all worked through and around them.  There was no budget.  I wouldn't be paid for the pilot shoot.  The producer couldn't even afford to fly me out and book me a hotel room for the Manhattan shoot.  But I was so hungry for the opportunity and I believe so much in our project that I got to New York City twice and Los Angeles once thanks to stand-by tickets from my fabulous flight attendant cousin.  Friends were kind enough to let me stay at their places  during my short stays in town.  We wrapped the pilot on Sunday, Oct. 14th.  I am extremely proud of it and ever so grateful to the entire crew.  What an honor it was to have producers not only acknowledge but appreciate my film I.Q. and interview skills.  They also appreciated how I hustled to be a part of the project.  I couldn't have done it without the help of family, friends...and without a lot of faith.  Especially in myself.  We all have to wait a few weeks for executives to make a decision on our pilot.  I pray it gets picked up.  We are over a decade into the 21st Century.  It's high time for TV's field of film show hosts, movie reviewers and interviewers to be more racially diverse.  Don't you agree?  Thanks and wish me luck with the pilot.