Judy Garland and THE FAMILY STONE

I think it touches me more now that I'm older and living in a post-September 11th world.  I'm referring to the song written for and sung by Judy Garland in Vincente Minnelli's original movie musical, Meet Me in St. Louis (1944).  The song is "Have Yourself A Merry Little Christmas."  I heard Christina Aguilera's recording of that holiday standard.  Ms. Aguilera has a big, wonderful voice -- but she could take a lesson from actress Judy Garland.  First of all, she got the lyrics wrong. Second, she's so busy doing pop music vocal gymnastics to show off her pipes that she ignored the heart of the song.  This is a problem I have with some young vocalists.  They're either replicating what they've heard before or they're showing off their vocal skills like a vain muscleman flexing his pecs in the health club mirror.  If I'd been Christina's producer, I would've had her do another take after we talked about the song.  I don't feel that her version is one of her better efforts. Not like "Beautiful."  Let me tell you of a tender moment with a movie audience one holiday season in a New York City cineplex.  We were at the preview of a new movie that incorporated the poignant Judy Garland number into its action. 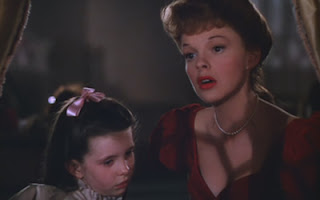 The new movie was 2005's The Family Stone.  Sarah Jessica Parker starred as an uptight, conservative city girl who goes home with her boyfriend for Christmas to meet his free-spirited, liberal family.  Diane Keaton and Craig T. Nelson star as the parents. 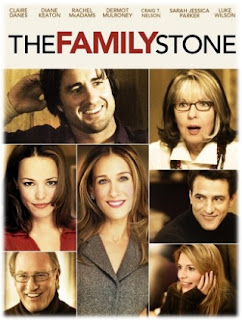 This holiday comedy did have one thing in common with Vincente Minnelli's classic film.  It focuses on one year in the life of an American family.  The Family Stone takes us from Christmas to Christmas. One sequence has a family member sit down to watch Meet Me in St. Louis.  She watches Esther, played by Judy Garland, sing "Have Yourself A Merry Little Christmas" to her sad sister.  We hear Garland sing the entire song over a montage of what other main characters are doing at that moment in preparation for the annual Stone Family yuletide gathering.  It's the highlight of The Family Stone, the thing that raised it from being pleasantly average to special in those few sentimental minutes with Garland's lovely, heartfelt vocal.  People near me in the audience were moved to tears.  There were sniffles.  I saw a couple of babyboomer moviegoers dab at their eyes.  I was a bit misty-eyed too.  We were touched by the song and the way the actress delivered it.

A good song -- especially a good song in movie -- is like a monologue.  It moves the action along.  It reveals character.  It reveals emotions when spoken words aren't enough.  Garland, the actress, understood this.  She acted her songs.  Minnelli flipped the script on Garland's MGM image.  She was usually the young show biz trouper with the dream of being on Broadway with her big voice.  Think of her movies Babes in Arms, Babes on Broadway, For Me and My Gal and Presenting Lily Mars.  In the director's turn-of-the-20th-century valentine to Americana, made during World War 2, Garland plays a member of a happy family in St. Louis.  Happy, that is, until the father gets a job offer that will uproot and relocate them to New York City.  He's the only one in multi-generational Smith household excited about the move.  All will pack and prepare to move because, after all, they are family.  Happy or not, they stick together.  It's a melancholy holiday.  It could be their last Christmas in their beloved St. Louis.  Little Tootie, in modern times, would've been called a "Goth" kid.  She's mischievous, fascinated with death and the macabre.  Played by Margaret O'Brien, she's a lovable child whose emotions run deep.  Dad doesn't realize how deep her feelings are.  She hates that the family is moving.  Her world is shattered.  She wonders if Santa Claus will be able to find her if she's no longer at that address.  Esther's heart is also heavy.  She's been in love with "The Boy Next Door."  The feeling is mutual.  He proposes to her that Christmas Eve night. 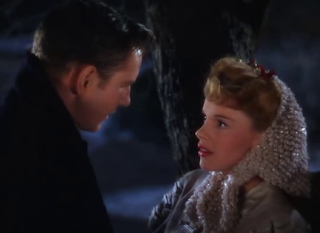 How will the move to New York affect their engagement?  Will their love survive?  Esther goes back inside her house and finds Tootie crying.  She understands and comforts her little sister.  They both look up and out the window.  Tootie watches for Santa Claus.  She wonders if he'll be able to find her in New York.  Esther watches as the boy next door pulls down his shade.  She wonders if she'll lose him.  Esther lovingly tries to lift her sister's spirits with a Christmas song.

Garland, the gifted actress/singer, knows the tone and emotions of the intimate scene.  She performs the lyrics with attention to that.  Compare this to the Christina Aguilera rendition.  With all the pop vocal loop-dee-loops she does, you wonder if she's ever really paid any attention to what the song says.  You wonder if she did any homework and knows its roots.  Another song written for a movie further illustrates my point.  "At Last" was first heard in the 1942 movie Orchestra Wives and performed by the renowned Glenn Milller Orchestra.  The 1942 comedy is available on DVD.  Several pop singers of that decade recorded the new hit tune.  In the early 1950s, Etta James covered "At Last" with a R&B flavor.  Singers have imitated her fabulous record ever since.  If a music hopeful gets on a TV show like The Voice or America's Got Talent and announces that he or she will do "At Last," you can bet you'll hear a replica of the Etta James rendition.  Even Christina gave us a vocal Xerox copy of Etta's version.  No new interpretation, no new phrasing, no new musical arrangement.  Today, Christina Aguilera is a judge on The Voice.  She helps groom the singing stars of tomorrow. We see so many show biz hopefuls and wannabes performing on reality TV shows.  I wish a network would bring back a weekend variety program like The Ed Sullivan Show or The Hollywood Palace.  Let us see the professionals and veterans doing what they do best.  Present some polished entertainment.  And let the amateur singers be able to watch and learn a thing or two.

I wish I could sing.  And, frankly, so do those who've heard me.

Have yourself a merry little Christmas.