See THE DUST BOWL on PBS

For review purposes, I had to watch DVDs of a new film by Ken Burns.  It has a November 18th PBS premiere date.  I love his work but, the sunny summer weekend I watched it, I didn't think that over two hours of a documentary on a 1930s environmental crisis would hold my interest.  I was riveted and, a couple of times, moved to tears.  You must see this on your local PBS station.  Don't fool yourself by thinking a crisis during the Great Depression has nothing to do with us in this 21st Century age of technology.  The Dust Bowl is so relevant and significant to modern times that you'll be slack-jawed. 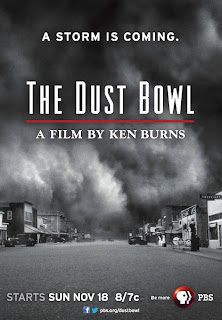 "The Dust Bowl" was a name given to the part of Oklahoma that was ground zero for this man-made ecological disaster.  At the root of this disaster was financial greed.  People were basically duped into removing the natural seas of grass in order to plant wheat and get rich quick.  The plan didn't work.  The land revolted against the rape, if you will.  Huge, almost apocalyptic dust storms swept the land claiming livestock and people.  The seas of grass were no longer there to keep the dust storms from occurring.  I won't give away everything that happens because I really want you to experience it for yourself.  I will tell you that this devastation not only continued for years but also ushered in other plagues that seemed Biblical in proportion.  Cattle lost weight from starvation.  There was a plague of jack rabbits.  Footage of this in the documentary looks like the dark side of Watership Down. An unusual form of dust-pneumonia took the lives of children.  All of this caused by unrelenting dust storms so gigantic, so powerful that they eclipsed the sun. 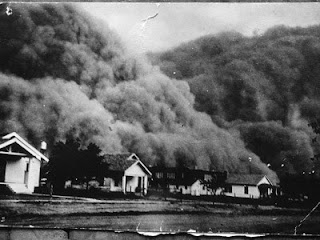 This was the breadbasket of America and it was made barren for a decade by these storms that kept coming and coming.  The land was disrespected and raped by financial greed.  As a result, people lost their jobs.  There was more unemployment in the Great Depression.  People couldn't pay their mortgages.  Banks foreclosed on their homes.  People became ill because of the dust storms and could not pay for medical aid.  Businesses went bankrupt.  The Oklahoma devastation drifted into other states. 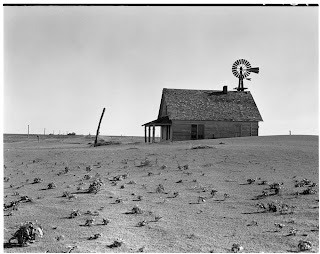 One of the great things about this documentary is that we see and hear from survivors of this enormous American tragedy.  It is their stories in their words that occasionally made me cry.  They were heartbreaking. Especially when they talked about children dying.  When you hear what these folks saw and survived, it will remind you that some of the most extraordinary people you could ever hope to meet are the ordinary people in your every day lives, the folks who have never posed for photos on a celebrity red carpet while being asked for the names of fashion designers who outfitted them in free clothing. 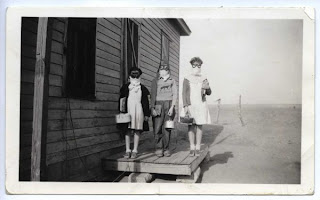 We learn about the class bigotry towards Oklahomans that was just as vile as racial bigotry.  There are so many sophisticated forms of communication nowadays.  Our social media is so advanced that it's wounded the postal system.  Yet, with all this speed of communication and information in new technology, are we really paying attention?  Do we pay attention to the morality lessons of history from more than 20 years ago?  I don't think we do.  And we must.  I reviewed this in a TV pilot I taped last month.  My co-host was unaware of The Dust Bowl in our national history.  I became aware of it when I was in grade school.  As a muscular teen, my late father was in the Civilian Conservation Corps, a relief program President Franklin D. Roosevelt started to help fix this American crisis.  Dad showed me photos of himself taken when he was a CCC worker.  I learned that this chapter in our country's history inspired John Steinbeck's novel The Grapes of Wrath.

You know that I'm a fan of and passionate about classic films.  After you watch Ken Burns' The Dust Bowl, you'll feel more depth in the backstories the next time you see the revered 1940 film adaptation of Steinbeck's Pulitzer Prize winning The Grapes of Wrath.  You may also feel a bit more depth when watching other classic films such as The Wizard of Oz, Bonnie and Clyde, Paper Moon and Chinatown.  In Chinatown, now you'll understand why private eye Jake Gittes gets punched out for calling a guy a "dumb Okie."  In The Wizard of Oz, now you'll know why Auntie Em and Uncle Henry's farm looked so depressed. 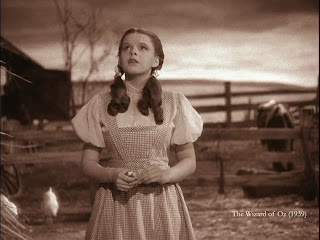 I believe in respect for the land.  I grew up on animated characters in public service announcements on TV telling us to "Give a hoot, don't pollute."  I don't scoff at the concept of global warming.  The fact that polar ice caps are melting in my lifetime alarms me.  I wish that would alarm many of our elected officials.  When the extreme effects of Hurricane Sandy flooded and altered parts of the East Coast, I thought about  global warming and I thought about lessons to be learned from the decade of The Dust Bowl.  When I was a kid, we used to watch Jacques Costeau and National Geographic specials regularly on prime time network television.  That was part of my school work.  We'd watch those educational shows about our planet and write reports for extra credit.  I wish that quality of reality programming would return to networks.  There's a lot we can all learn from Ken Burns' important new PBS documentary.  This past reflects our present. 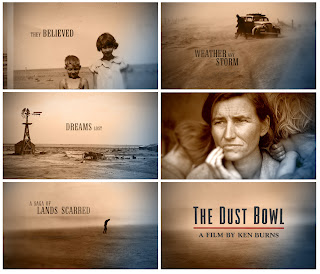