Loved Hur.  Hated him.  Is there a 1950s movie character who grows more despicable than Stephen Boyd as Messala in William Wyler's Oscar-winning remake of Ben-Hur?  Boyd is a charismatic combination of unrequited love, political ambition and hate mixed with an electric sexuality that hums right beneath the surface of his actions.  Before the Roman tribune reunites with his boyhood best friend, a Jewish prince, he surveys his garrison.  There's almost a glint of sexual delight in his eyes when he says, "I am in command."  Power and Judah Ben-Hur are the two great stimulants in Messala's life. 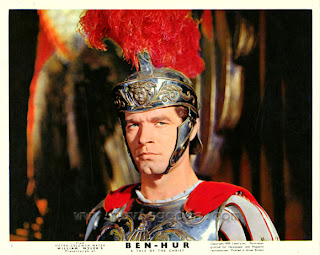 Ben-Hur is a big Hollywood movie that should be seen on a big screen.  The action is big.  The emotions are big.  The characters are larger-than-life.  Even Jesus is a character in this spectacle.  Ben-Hur made big money at the box office for years.  When I was a kid, it was re-released to play exclusively at a Hollywood theater before going back into the MGM studio vaults and, eventually, debut on network television.  Why did this classic get the royal treatment?  Because it won 11 Academy Awards, making it the most successful remake in Hollywood history.  The original was a silent film, a hit in 1925.  The 1959 remake won for Best Picture, William Wyler took home another Oscar for Best Director, Charlton Heston was Best Actor and Best Supporting Actor was...British actor Hugh Griffith for donning dark make-up and playing an Arab sheikh who likes Judah. 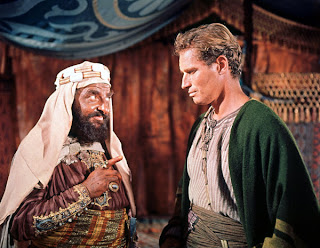 Griffith was a versatile character actor who did some fine work in two other Best Picture Oscar winners -- Tom Jones (1963) and Carol Reed's Oliver! (1968).  He was hilarious as the totally clueless King Louis of France in Start the Revolution Without Me (1970). 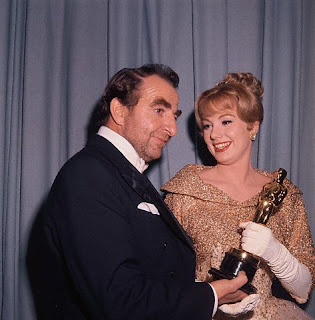 However, it's Stephen Boyd who really sets the screen on fire with his supporting work in Ben-Hur.  The late Irish actor made Messala complicated, vivid, human.  When he says, "Look to the West, Judah...look to Rome," it's not just a polite warning.  There's an air of seduction about Messala's statement.  It's been noted that director Wyler had Boyd play Messala as a spurned lover.  The two had been extremely close in Jerusalem when they were teens.  Messala saved Judah's life.  "The best thing I ever did," Messala says.  The homoerotic subtext Stephen Boyd gives his relationship with Judah Ben-Hur is the lightning bolt that makes his performance so remarkable.  Look at the radiance in Messala's face when the two friends are reunited and hugging.  He looks like he wants to grab that big hunk o' Jewish beefcake and roll around with him by the Sea of Galilee like Burt Lancaster and Deborah Kerr on the beach in From Here To Eternity.  Judah, a pacifist, still loves his Roman soldier friend and gives him a gift.  A beautiful stallion.  In a bromance, that's the equivalent of a nice little bauble from Tiffany's.

When they drink, it's almost as romantic as Nellie Forbush and Emile de Becque sipping from brandy snifters in South Pacific before the "Some Enchanted Evening" number. 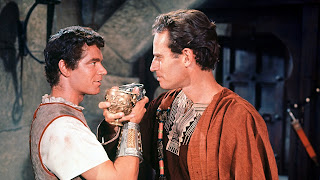 In the first half hour, one of Messala's officers refers to Jesus Christ as being a young man who does "magic tricks.  Miracles..."  The story takes place in Biblical times.  We Christians accepted tales of the Savior making the blind see, turning water into wine and even walking on water before He was crucified and resurrected from the dead.  We know those were ancient, brutal, carnal times.  But we never think of same-sex attraction as having existed then.  Can you just imagine a Roman bathhouse on a Saturday night?

Boyd's acting choice is brave and memorable.  Especially for the 1950s.  With Judah, he displays both a giddy man-crush and a macho military swagger.   It's a nuanced performance.  He begs Judah, the son of a rich and influential Jewish family, to betray some Jews.  The tribune would benefit.  He'd become feared, gaining more favor with the Emperor to conquer and kill for Rome.  He is a man at war with the world and at war with himself due to his quest for power.  This quest will turn the two friends into enemies.

Judah will learn hate too when he is unjustly exiled and banished to a slave ship. 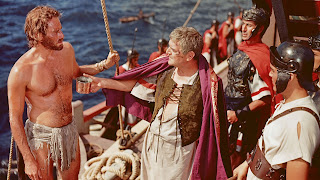 A signature of William Wyler films is a key scene in which there's little or no dialogue.  Think of the opening of The Letter with Bette Davis as the proper British housewife who pumps six bullets into her lover point blank.  Davis as Regina in The Little Foxes staying seated as her husband suffers a heart attack.  Dana Andrews as the out-of-work World War 2 veteran pilot in a dive bomber graveyard in The Best Years of Our Lives.  The princess meets the press at the end of Roman Holiday.  In Ben-Hur, it's the famous chariot race with the two ex-friends.  Messala is now a walking furnace of intense hate for the Jew he once loved.  This is reflected in the design for Messala and his team of horses.  The predominant colors are black and red -- like the inside of a furnace. 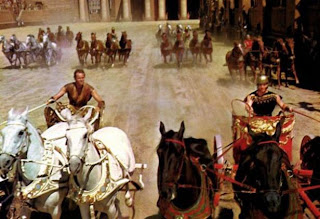 Messala embraced the dark side of a corporate mentality.  He learned bigotry.  He embraced diversity once in his affection for Judah Ben-Hur and his family.  Now he will fall victim to his own acquired venom.  He will not change his heart.  He has lost his soul.  He had it when he loved Judah.  In their final meeting, Messala will be a bloodied mass of rage.  Yes, Heston won for Best Actor.  But, admit it.  Whenever Stephen Boyd is in a scene with him, your eye goes right to handsome, corrupted Messala.  Hugh Griffith gave a good performance.  But I would have given that Best Supporting Actor Academy Award to the Ben-Hur star who wasn't even nominated -- Stephen Boyd. 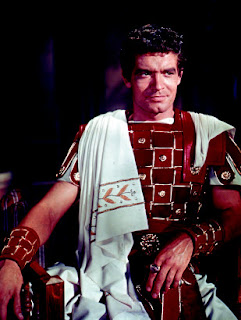