MILK: This Day in History

"All men are created equal.  No matter how hard you try, you can never erase those words.  That is what America is." ~Sean Penn as the late San Francisco gay rights icon Harvey Milk in Milk 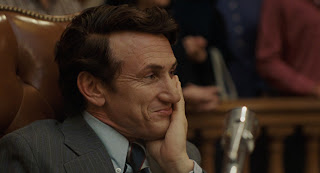 On a chilly night in 2008, the Screen Actors Guild held a preview of Milk, starring Sean Penn as the man who became the first openly gay person to hold political office in California.  I remember the news bulletin on this day back in 1978 that became the national headline.  Harvey Milk and San Francisco Mayor George Moscone were shot and killed in City Hall.  The assassin was disgruntled former city supervisor Dan White.  Harvey Milk was nationally known for his activism.  His face grew familiar in the national news.  To see an outspoken, charismatic, ambitious and passionate openly gay person fighting for rights was a new thing to see on television.  He was a hero to young people struggling with the truth of their sexual identities then.  The news of his death and the mayor's was a shock.  Victor Garber co-starred with Penn as Mayor Moscone. 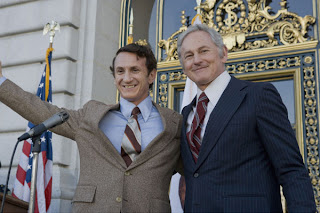 We SAG members stood on line, waiting with our passes to be admitted into the cineplex on West 34th Street for the preview.  There was a couple behind me, also eager and excited to see the film.  There'd been great buzz about this Sean Penn performance.  The two fellows, in their 20s, and I started chatting.  They knew that Harvey Milk was an icon who was slain in office but they didn't really know much more about him.  I told them that, if the movie had a character named Anita Bryant, a popular TV personality who publicly came out against gays having civil rights, she was a real life character.  Their response was, "Seriously?"  "Seriously," I responded.  I told them that, in TV terms, she had a Kathie Lee Gifford kind of national popularity, appeal and Christian wholesomeness.  She was a singer.  She was a former Miss America finalist.  She did national TV commercials.  Unlike Kathie Lee, she condemned gays. She fought against gay people being allowed to become schoolteachers.  The two young men were stunned.  These were guys of the Will & Grace generation.  They sat near me during Milk.  When it was over, they looked at me and said, "Wow.  We didn't know all that."  They loved it.  As did I. 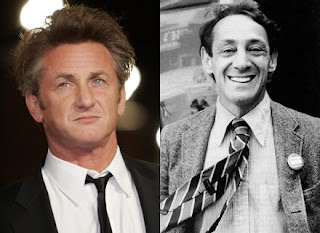 There was so much history in it.  And such an amazing, passionate transformation by Penn in that character role.  His second Best Actor Academy Award was well-deserved. 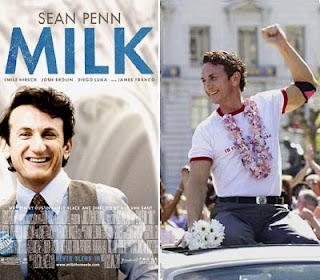 When I lived in New York, there was an openly gay news contributor who did excellent features of interest to the gay and lesbian community.  He was on NY1, the New York 1 channel.  Through the years, it was not unusual to see an openly gay contributor on local New York news talking about entertainment and/or fashion.  Early last year, due to this Wicked Witch of a Recession, I was financially flat and wound up living in a spare room at a college buddy's place in San Francisco.  His apartment was a short walking distance from City Hall.  In fact, the golden dome could be seen from his place.  Just about every time I looked at that shining dome, I thought of Harvey Milk.  Every time I passed City Hall on my way down Van Ness to Market Street or headed to a Peet's Coffee shop, I thought of Harvey Milk.  And there I was, unemployed and trying to start my life over in his town.

Maybe this is the New Yorker in me, but one thing struck me as odd when I watched the local Bay Area news programs.  There was no openly gay reporter covering gay-related issues or stories of interest.  Not that you'd have to have one.  But we had one in New York City --- and that was San Francisco, famous as a Gay Mecca in the U.S.A.  I pitched my skills and ideas to executives at San Francisco TV news stations.  In person, I told them I could be a contributor and do such pieces.  I have network TV credits to my resumé.  I did ten years of local morning TV news contributor work in New York City.  I'm a member of the community.  One year when I was a regular on the Whoopi Goldberg syndicated radio show, we told listeners that our morning show team was participating in New York's annual Gay Men's Health Crisis AIDS Walk during Gay Pride month.  On the air, I expressed my deep gratitude to the GMHC for helping me help my late partner when he was diagnosed with AIDS.  In the Bay Area, I pitched myself.  But no one caught me.  Oh, well.  That's how it goes.

If given the chance, I believe I could've done some good features for one of those San Francisco news programs.  Maybe I'm making too much of it.  But, if any major U.S. city would have openly gay talent on a news program who did features on the LGBT community, wouldn't you expect it to be the city that gave America "The Mayor of Castro Street"?  That's what Harvey was called.

We lost him on this day in history.  Suddenly.  Senselessly.  He changed lives before he died.  To get a feel for what he did and what we lost, see Sean Penn give that outstanding performance in Milk.