Two young men in love in London, family preparations for a big Muslim wedding, an overbearing mom who doesn't realize that her son is gay and Cary Grant's ghost saying "It's a bit like the champagne party before the wedding in The Philadelphia Story, isn't it?  But with saris."  If you've been following ABC's Desperate Housewives, you know actor Kyle MacLachlan from that cast as wheelchair-bound Orson Hodge.  Back in the '80s, we watched him as Special Agent Dale on Twin Peaks.  To see MacLachlan in peak comedy form, watch him as the Spirit of Cary Grant in the 2004 indie feature, Touch of Pink.  The title is a send-up of That Touch of Mink, the romantic comedy Grant did with Doris Day.  Classic film lovers will have a hoot catching Cary Grant movie references and movie lines in Touch of Pink. 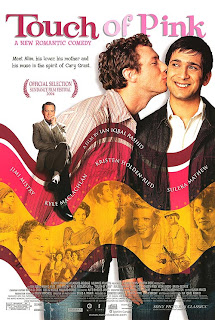 Bravo MacLachlan! Not since Tony Curtis in Billy Wilder's Some Like It Hot has an actor done as wickedly funny and accurate an imitation of Cary Grant.  The movie is a culture clash romantic comedy with a set-up you've seen before.  Two lead characters of different races fall in love and have to deal with a critical parent or parents.  In this case, it's a same-gender couple.  Alim works with a top film production company.  His Caucasian British boyfriend is an economist.  Alim has colorful, financially comfortable Uncle Hassan and Aunt Dolly ("Our son, the dentist, is getting married!") in his life.   Then there's his conservative widowed mother who wants him to attend the family wedding.  She also wants to hook him up with a proper Muslim girlfriend.  She's coming to visit her son.  He and his boyfriend have to act hetero, Alim orders.  He's afraid to come out to his mother.  This frustrates the boyfriend.  Like millions of us, Alim turned to old movies for fun and solace as he grew up.  He loved Cary Grant movies.  Now the ghost of the Hollywood star pops in as his muse during his crisis.  That's what gives Touch  of Pink real spark.  It's a bit of a twist on Topper.  MacLachlan moves like the mature Grant.  He nails Grant's unique cadence of speech.  His face has a similar squareness to Grant's.  What a surprise to discover that MacLachlan has the gift for screwball comedy. 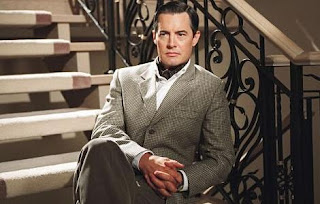 Imagine the Cary Grant from That Touch of Mink (co-starring Doris Day)... 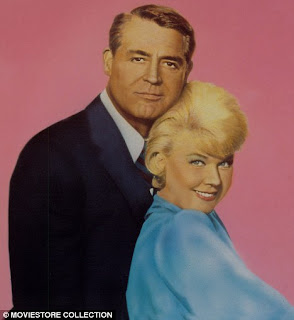 ....or from Charade (co-starring Audrey Hepburn)... 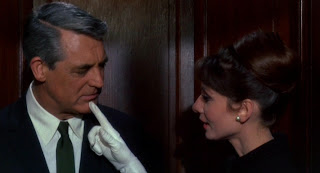 ...as the spirit uncle giving a live gay nephew advice on subjects ranging from romance to family matters to fashion.  That's sort of what we've got going on here with a little something extra. 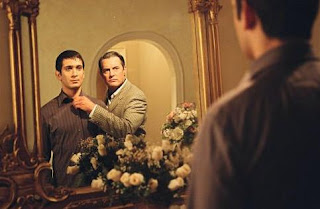 Alim's mother was not always present when he was younger.  He feels that she emotionally abandoned him.  Their relationship is frayed.  Grant, in real life, had mama drama too.  His mother abandoned him.  It's interesting to see how his ghost relates to Akim's mother when she appears.  Besides MacLachlan's spirited performance, there's the fun of the references to Grant's films:  The Philadelphia Story, The Bishop's Wife, That Touch of Mink, An Affair to Remember, Gunga Din.  Even that lumbering historical epic he did with Frank Sinatra and Sophia Loren, The Pride and the Passion.  All of that business works.  It's so cleverly written and directed by Ian Iqbal Rashid, an obvious Cary Grant and classic film fan.  Not that this is a home-run comedy in a league with Grant's The Awful Truth, Bringing Up Baby or The Bachelor and the Bobby-Soxer, but it's nice light entertainment.  It has a performance to tell your friends about and it leaves you with a smile on your face.  As a movie reviewer, I had to sit through alleged romantic comedies like Fool's Gold starring Matthew McConaughey.  What  cow pie that one was.  The same goes for The Ex with Zach Braff and Amanda Peet.  Touch of Pink was much better than those but they got more publicity.  I wish I could've interviewed director/writer Rashid and actor MacLachlan about this comedy.  Hearing the Spirit of Cary Grant wisecrack, "Not enough air pushing through the windmills of her mind" broke me up laughing.  Writer/director Rashid delivered some definite laughs in this script.  Why hasn't he done more movies or TV since this 2004 Sundance Film Festival selection of his? 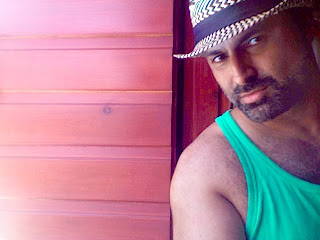 Another wonderful thing that Ian Iqbal Rashid did in his screenplay was prove the power of cinema to make us a global village.  Classic films can give us common ground on which to meet and discover each other.  They can lead to communication and connection.  In a tender moment, Alim's mother recalls "Cary Grant.  Doris Day.  The Naz Cinema in Mombasa."  Movies gave life and color to her young dreams too.  "I went to London to be Doris Day," the Muslim mom reveals.  But white collar London didn't open its business doors wide for an Indian Doris Day-type career girl.  She was still a minority.  And felt the chill of exclusion.  Jimi Mistry and Kris Holden-Ried  are fine as the fellows in love.  However, you sort of wish they had that extra special onscreen chemistry together like Grant had with Irene Dunne, Katharine Hepburn, Jean Arthur or Myrna Loy.  Mistry is sexy and appealing but a tad too forlorn as Alim.  Suleka Mathew is very good as the sophisticated, devout Indian mother who stands to come between the two mates. 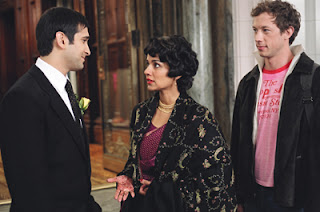 Old Hollywood had supporting actors who could always make a good movie even better or an average movie above average with their work.  Those were actors like Eve Arden, Thelma Ritter, Mary Wickes, Edward Everett Horton and Oscar Levant.  They were great sidekicks.  You waited for them to come back onscreen.  That's the quality Kyle MacLachlan has in Touch of Pink.  He's not the lead but you wait for his next scene because he's so much fun.  At one point, Alim says to Cary Grant "What would I have done without you?"  Good question.  That celebrity ghost is the life of this film.

Kyle MacLachlan's sensational Spirit of Cary Grant really floats this romantic comedy.  My, he was yar! The Philadelphia Story after Touch of Pink would make a nice weekend DVD rental double feature.  Check it and and let me know what you think.
at April 03, 2012