The 1970s was the decade of the made-for-TV network movies.  Many of these movies were under 90 minutes long (to make room for commercial breaks) and a fair share of them were cheesy in a fun way.  But some were really good and has us talking about them in school the next day back when we babyboomers were kids.  A young guy named Steven Spielberg directed a made-for-TV road action movie called Duel that was a knock-out.  I think it played in the United Kingdom as a theatrical release.  Brian's Song with James Caan and Billy Dee Williams acting out the interracial NFL friendship of Gale Sayers and terminally-stricken Brian Piccolo made us cry.  Karen Black scared the bejeebus out of us when an evil voodoo doll came to life in her apartment in Trilogy of Terror.  Hal Holbrook and Martin Sheen in That Certain Summer played a couple in San Francisco.  The son of one is about to visit from L.A. and doesn't know that his divorced dad is now gay and has a new partner.  Newcomer  Stockard Channing scored bigtime in the "ugly ducking" revenge comedy, The Girl Most Likely To... 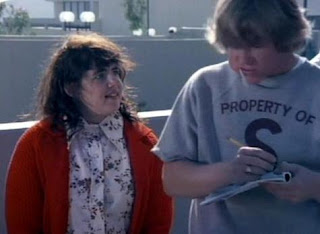 This 1973 audience-pleaser falls in today's category of "mean girl" movies.  With a story by Joan Rivers, the teleplay was also co-written by Rivers.  TV audiences were introduced to Stockard Channing as college student, Miriam Knight.  Miriam describes herself to us this way: "I was a beautiful person who'd been kidnapped by an ugly body."  This was made in the era when Elizabeth Taylor and Olympic swimming champ Mark Spitz were examples of how someone should look.  Good-hearted Miriam is treated badly by fellow students such as her blonde cheerleader roommate, Heidi Murphy. 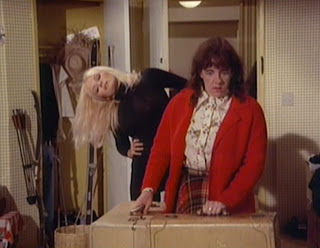 Heidi sabotages Miriam during a very special event while Miriam is distinguishing herself in the spotlight.  Miriam is also mistreated by a campus jock, a campus med student and a plumber who seemed to be romantically interested in her.  All the rejections and public humiliations force her to flee in a car.  She's so blinded with hurt that she's not paying attention to the traffic.  She survives a serious collision and, during her weeks of recuperation, she's wrapped up in bandages and a cast like it's all a cocoon.  Which, in a way, it is.  Doctors operated on her.  While in the hospital, she lost weight.  How ironic today that a woman in a 1973 script written by Joan Rivers would have her bandages removed and hear a doctor remark, "I've never seen such fantastic plastic surgery in my life."  Through the years, Joan herself would become the Queen of Plastic Surgery.  If Joan Rivers has her skin pulled back one more time, she'll have to open her blouse for a Pap smear.  Miriam, the ex-caterpillar, sees herself in a mirror and can't believe her eyes.  She's a butterfly.  She takes "the new her" out for a test spin around the hospital floor. 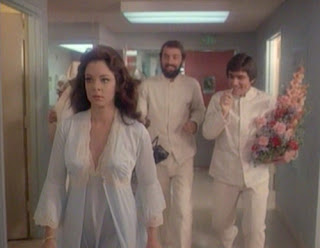 She's still the same person on the inside, but the outside is now desirable.  In our shallow culture, she's now worth the time and respect simply because she's cute.  Miriam's mind was unimportant to people.  That highly inventive and well-read mind hatches a plot to serve up some lethal justice to the top folks who treated her like dirt on campus.  She'll do it with a few clever disguises and fake identities.  This section is so much fun.  Stockard Channing is total star quality plus fabulous acting as the smart and cynical -- and now deadly -- Miriam Knight.  This is such an entertaining black comedy.  Why didn't Joan Rivers write more TV scripts?  The Girl Most Likely To...was a winner.  We couldn't wait for Heidi the cheerleader to get her come-uppance.  One of my other favorite parts in this comedy -- the plumber's funeral scene.  Ed Asner, during a break  from playing Lou Grant on The Mary Tyler Moore Show, has the role of Ralph.  Ralph is the detective out to solve the murder mysteries.  He's also a guy who happens to be as lonely as Miriam.  As his investigation continues, he grows fascinated with the killer's mind. 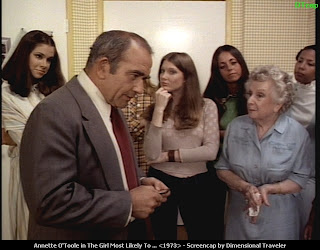 Annette O'Toole, in the middle of the above pic, had a bit role as one of the mean girls in Miriam's campus life.  Like fellow screen newcomer Stockard Channing, she'd go on to lead roles and an Oscar nomination.  O'Toole's Academy Award nomination was in the Best Song category.  She co-wrote an original song for the 2003 Christopher Guest mockumentary, A Mighty Wind.  Channing was a Best Actress Oscar nominee for 1993's Six Degrees of Separation co-starring Donald Sutherland and Will Smith. 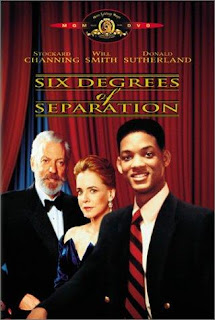 This black comedy by Joan Rivers is still relevant in our looks-over-substance culture, especially in regards to females.  Have you ever seen when a show like Entertainment Tonight disguises a slim, pretty correspondent in a fat suit and sends her out into society to tape mean comments on a hidden camera?  Supermodel Tyra Banks went undercover like that once on her talk show.  We get confirmation that people will say unkind things about the plump.  But, after the experiments, have you ever noticed that none of those syndicated magazine shows ever has a full-figured host or regular contributor?  Joan Rivers created one of the most wickedly delightful characters in a 1970s made-for-TV movie.  She also helped launch a versatile new talent, Stockard Channing. 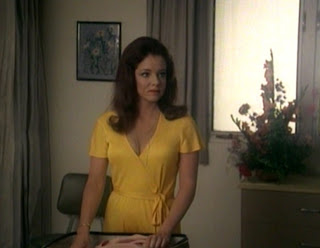 For some definite laughs, check out the DVD of 1973's The Girl Most Likely To...  It's only 75 minutes long and more still more satisfying that some Adam Sandler, Jennifer Aniston and Vince Vaughn theatrical releases I've sat though in the last ten years.  Thank you, Joan Rivers. 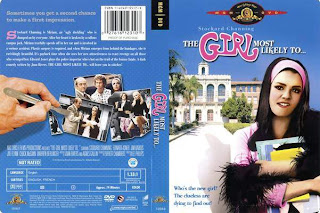 Want a good double feature?  Rent that and the documentary about its writer.  I still feel that Joan Rivers:  A Piece of Work should've been eligible for a Best Documentary of 2010 Academy Award.  Wow. It packs a punch.  Funny, yes.  Also very revealing and surprising.  Joan Rivers is one talented, driven actress/comedienne...and writer. 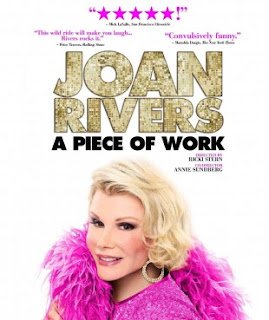