Well that was big TV news.  Keith Olbermann was given the heave-ho from his host gig on Current TV. Then came news that, because of being let go, Keith plans to sue Current TV for $50 million.  Jeez!  Honestly, I have not followed the whole story and I didn't follow him to Current.  But I felt he was pretty lucky.  He got fired by MSNBC.  Afterwards, he didn't exactly spend months filing for unemployment benefits online and getting a weekly stipend of $405.00.  He soon got picked up by Current.  And now this. 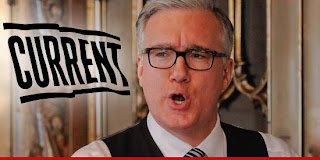 I've got a question about Olbermann.  Before I get to my question, here's a story about the previous job I had.  It was a job on national TV.  When I worked on the Whoopi Goldberg morning radio show in New York City, I got a call from a longtime friend and former co-worker. She was then a segment producer for an AARP TV magazine show.  The purpose of the show basically was to show people 50 and over as being more "hip" versus "hip replacement."  The executive producer of the show claimed to be a big, big, big, big, BIG fan of mine going back to my VH1 years.  The show was based in Washington, DC and needed a New York City contributor.  They assigned me to do a feature on a renowned Broadway costume artist named Bessie Nelson.  She's known for her bead work.  Bessie was  profiled on CBS News and in The New York Times.  This sounded like a nice opportunity, so I accepted the assignment -- and I'm glad I did.  My camera and audio crew guys were in their 20s and 30s.  Bessie was so cool that we wanted to hang out with her some more even when the cameras weren't rolling.  Go to Google and search this: Broadway's Bead Lady -- My Generation.  You'll find my feature of Bessie that I shot and wrote for the AARP TV magazine show. 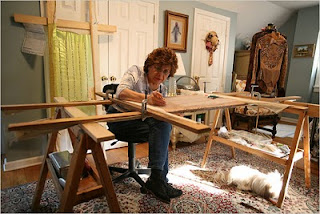 Bessie Nelson has been honored by the theatre community for the design work.  She should also be honored for her coffee and coffee cake.  My crew guys for her shoot would give me an "Amen" on that.   Our executive producer sent word asking if I had another 50+ person I could interview.  I did.  Robert Osborne, Hollywood historian and host of Turner Classic Movies.  Film buffs young and not-so-young dig Osborne.  TCM has a hip appeal.  It acknowledges groups otherwise mostly ignored by mainstream networks in morning news and entertainment.  TCM did month-long salutes to Native Americans, Arabs, Asians, Hispanic Heritage, African-American and Gay & Lesbian images on film.  Osborne has interviewed hundreds of stars past and present.  His career path was changed with advice from Lucille Ball.  He's like a rock star to TCM fans.  All of this, I believed, would interest that show's baby boomer audience.  I'd been in touch for a couple of years with Darcy Hettrich, a TCM exec.  She contacted me when I was on Whoopi's radio show on-air team and asked if I could hook her up with Whoopi's agent, manager or publicist.  TCM wanted Whoopi as a Guest Programmer for one night with Robert Osborne.  I replied, "Skip that.  I'll ask her myself for you.  I sit next to her at work."  I got back to Darcy with a direct "Yes!" from Whoopi plus a list of movies she requested to intro with Osborne. So...months later...when I requested taping an interview in Manhattan of Robert Osborne, TCM  publicity reps were extremely helpful.  We confirmed an interview date in a deluxe midtown Manhattan hotel.  The hotel rep who was giving us a room for the taping asked only two things -- that I mention the name of the hotel and that she could get her photo taken with Robert Osborne.  Fabulous. It broke my heart but I had to cancel the interview out of respect for Robert Osborne and Turner Classic Movies.  My frustrated segment producer friend gave me the news that our boss reportedly felt the Osborne interview would need some "shtick."  His idea for "shtick" was that I should tape some business with me totally done up as Norma Desmond in Billy Wilder's Sunset Boulevard. 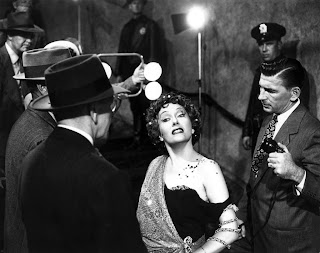 As Anna Russell used to say, "I'm not making this up, you know."  I mentioned a couple of things to the executive producer.  First...Norma Desmond was not black.  Second...I interviewed some of the most famous people in film, TV and music on my network talk show and not once did management ask me to put on a dress.  By the way, go to Google and search this: Bobby Rivers VH1 Talk Show Host.  Look at my demo reels on YouTube and you'll see what I mean.  He was adamant about the shtick.  I cancelled the Osborne shoot.  To dress in drag as Norma Desmond for an unnecessary gag would've been disrespectful to Osborne and to the TCM product, I felt.  Also, I was the first African-American to get his own talk show on VH1.  On a nationally televised TV awards show, I was up for Best Interviewer.  I lost to Larry King.  If Larry King was interviewing somebody for that AARP TV show, would he be required to wear something off the shoulder?  Please.  Anyway, my work must've been good because I was hired be a regular the next year.  There was paperwork to be signed.  January 2nd, a weekday, would be my first day of work. I'd produce/write and appear in one feature per month.  This was a major blessing because Whoopi's radio show had been cancelled six months prior.  I needed the work.  The AARP TV gig would more than cover my New York City rent.

However, the executive producer forgot to tell me that I had the job.  I didn't find out until half-past "Oprah" on January 29th that I had a job that began on January 2nd.  The very nice and frustrated woman from the Human Resources office contacted me to find out when I could fill out and return the W4 forms.  It was about 4:30pm.  "The W4 forms from over six months ago when I did the Bessie Nelson piece?  I have to fill them out again?" I said.  She replied, "Did (exec producer's name) tell you that you're working for us now?"  I answered, "No."  She said, "Oh, Lord."  The next day, the executive producer called me to apologize.  The head of an AARP product hired me for a job but forget to tell me until a month after my start date.  To me that seemed like the ultimate senior moment.  He, my "big fan," assigned me Health & Medical features.  Not exactly my forte.  I was let go two months later for being late handing in my completed features.  Of course, I did say "You do know I didn't find out that I had the job until a month after it started.  That's a big reason why I was late."  Still, I was let go.  In my 50s and fired by AARP.  That was too ironic even for Alanis Morissette.  Yes, I was angry and humiliated but I decided to just move on.  I did not go "Keith Olbermann" on 'em.  I'm actively pitching myself for new TV work.  My question about Olbermann -- who is going to hire him now when he's suing his previous employer for several millions of dollars? As I wrote earlier...Jeez!
at April 09, 2012