On Thursday, a national entertainment magazine started its countdown to Sunday's Easter egg hunt time by asking online readers for their favorite films with depictions of Jesus Christ in them.  One of the first that came to my mind was Jeffrey Hunter as King of Kings.  I'll blog later about that Biblical epic.  Today, I thought of a wonderful foreign film that's a classic in Spain but not widely known here in the States.  The American title of this 1955 release is Miracle of Marcelino.  The original Spanish title was Marcelino Pan y Vino (Marcelino Bread and Wine). This simple fable of love, compassion, belief and resurrection of the spirit through freedom from fear is a perfect film to see on an Easter weekend.  You will not forget child actor Pablito Calvo as Marcelino. 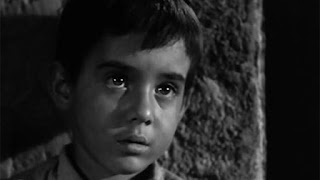 I didn't forget him and a few decades passed in between my viewings of this film.  I first saw a dubbed version of it in Catholic grade school.  On special afternoons, the sisters would show us educational features or movies in the auditorium.  We loved those afternoons.  Just as entertaining as watching a feature was watching two nuns try to thread a film projector.  Miracle of Marcelino played well in Los Angeles arthouse cinemas, I read, but I never saw it on TV. Back in 2009, I found a subtitled copy of it at my video store in New York City.  I fell in love with this movie all over again.  Only about 85 minutes long, this film by Ladislao Vajda  has absolutely gorgeous black and white cinematography with a rich use of light and shadow.  That alone is a reason to watch.

The story takes us to the Spain now free of Napolean and the French.  As one man says, "...Spain is once again ruled by Spaniards."  A village fiesta is underway.  A clergyman, warmly greeted by villagers, heads in the opposite direction of revelers.  Father Luis visits the parents of a sick child.  The couple didn't expect his visit because of the village's big annual celebration.  He replies, "My fiesta is here."  He represents the spirit of the monks we'll meet.  To the little girl and to us, he'll tell the legend of Marcelino beginning with "Once up a time."  In a poor part of town, three Franciscan friars take a ruin of a building and turn it into a simple monastery with help from some of the village men. 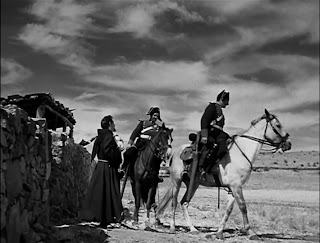 In time, the number of monks grows from three, the number of Wise Men bearing gifts for Baby Jesus in the nativity story, to twelve, the number of apostles with the grown Jesus Christ.  One day, a baby is left at the monastery's doorstep.  They care for the child.  When the boy becomes five, the monks try to locate his mother.  But Marcelino is an orphan.  Feeling that the little boy needs parents, the Brothers attempt to find a good home for him.  They approach men in the village.  One is too poor.  One has a half-dozen children already and utilizes them as child labor in somewhat unsafe conditions.  Another man wants Marcelino.  He's a bully, mean and physically abusive. 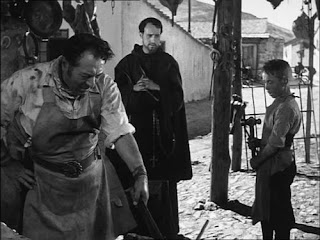 The Brothers refuse to subject Marcelino to any of that.  It's decided the little orphan will stay with them in the monastery.  "Each monk will be his mother and his father," one proclaims.  They are gentle, caring men.  One of the original three is sort of like the fretting mama.  He sews and plants flowers.  Gentle, they are, but not weak.  They stand up to the bully who wants Marcelino.  He wants him the way one would want an appliance or a pet.  He's greedy.  One Brother confronts him with "You don't like children.  You want only to know that you can have what you wish." 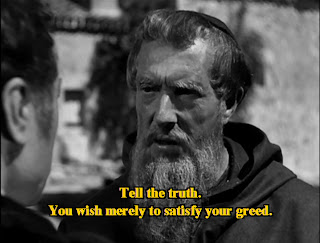 We've come to love these sweet and protective monks.  That brute will become a temporary power in town.  The Brothers are the good side of the masculine energy.  He's the dark side of it.  Facing a few, including the monk who sews and plants flowers, he rudely calls them "half-men."  Mischievous little Marcelino loves the monks yet he often wonders about his mother.  "Do all of us have mothers?" he asks.  He's energetic, gets into everything and loves playing innocent pranks on the monks.  Huggable, burly Father Cookie (his nickname for the monk who cooks) sternly orders Marcelino never to go into the room upstairs.  A man in that room might take him away.  The truth is, the monks keep their sharp and possibly dangerous garden tools up there.  Marcelino could hurt himself.  As for "the man," another room has a hugh crucifix with a life-sized replica of Jesus on it inside.  This is a room the monks probably use as a chapel.  But Father Cookie, like a papa, made up that story to keep a little control over 5-year old Marcelino.  The monks are a little concerned that the boy talks to an imaginary friend named Manuel. It's playful talk, but talk to an unseen entity just the same.  An imaginary friend or guardian angel?  Manuel tells Marcelino to go up the stairs.  He does.  He enters the other room.  Marcelino befriends the man on the cross.  Like this kind little boy who brings bread and wine, the crucified man also loves his mother.  And wants to see her again. 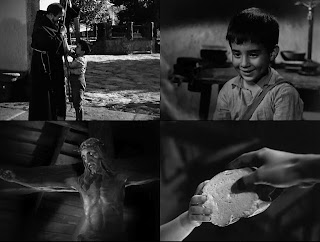 The monks receive an eviction notice.  They're worried about what to do with Marcelino.  They have no idea he's got a miraculous new friend.  When I was a kid, the initial shot of Jesus frightened me a bit because it looked grotesque.  Growing up Catholic when I did, it was part of our weekly ritual to go to church during our school day.  In mass and in the classrooms, we parochial school youngsters grew up constantly seeing the image of a tortured, anguished innocent Jesus dying horribly on a cross.  I should've been used to it but it still freaked me out for a moment or two.  In Vajda's film, Jesus became so human, so warm, in conversations with Marcelino that I wasn't freaked out anymore.  I read that Pablito Calvo became the most successful child actor in Spain because of this film.  It's easy to see why.  With his angelic, sad face, he had moments that are the kind critics call "Chaplinesque."  The orphan steals Jesus a slice from a freshly-baked loaf of bread.  That's so Charlie Chaplin and one of my favorite scenes. I loved it as a grade schooler.  I loved it today.  (I watched the movie again this morning.)  I'd like to see this film get an American spotlight and air on our TCM, Turner Classic Movies.  TCM airs The Song of Bernadette starring Jennifer Jones. For that, Jones won the Best Actress of 1943 Academy Award.  TCM also airs The Miracle of Our Lady of Fatima with Gilbert Roland and The Miracle starring Carroll Baker, both 1950s Hollywood films.  This Spanish film is better than those two 1950s Warner Bros. features.  It's as touching as The Song of Bernadette.  The monk narrator who comforts the sick little girl in Miracle of Marcelino is played by Fernando Rey, who became an acclaimed Spanish actor. 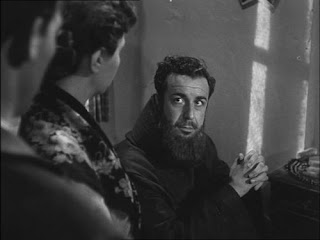 His fame expanded internationally in the 1970s thanks to his work in classic films directed by Luis Buñuel.  Millions of Americans knew his face from the Oscar-winning Best Picture of 1971.  Fernando Rey played a top foreign criminal pursued by Gene Hackman as New York City cop "Popeye" Doyle in The French Connection. Remember the subway scene? 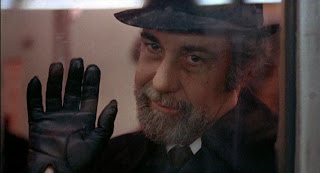 I think you'll enjoy the 1955 spiritual fable, Miracle of Marcelino.  It's quite special and a simple beauty. Like black and white pearls.  I'm so glad the nuns at St. Leo's introduced me to this foreign film when I was a kid.  A tender tale, I highly recommend Miracle of Marcelino for Easter weekend viewing. Or non-Easter weekend viewing.  It's a classic. 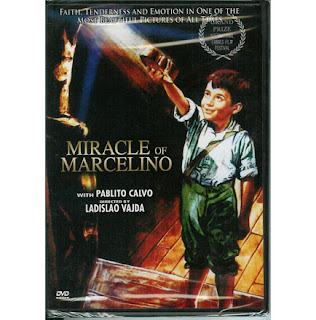