Carol Burnett was riding the crest of CBS success with her Saturday night variety show when she bravely challenged herself by taking on the lead film role in a drama written by the man who wrote Casablanca.  Her 1972 co-star was Walter Matthau, very popular with moviegoers audiences at that time.  In Pete 'n' Tillie, her character says "Honeymoon's over.  It's time to get married."  Not your typical middle-aged couple. 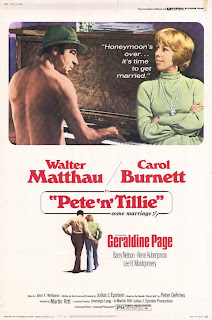 Julius J. Epstein got an Oscar nomination for writing this screenplay.  Martin Ritt (Hud, Paris Blues, The Great White Hope, Sounder, Norma Rae) directed it.  Pete 'n' Tillie had a major emotional impact on me when I was a kid.  I went to the movies one weekend to see it mainly because I loved laughing at Carol Burnett every Saturday night.  This was different.  It had humor but there was also hurt, anger, tragedy and a marital sexual frankness.  This isn't a classic film like Epstein's Casablanca or Ritt's Hud.  Still it moved me.  It stayed with me.  Burnett played heartbreak, disappointment and even tragedy for laughs in her hilarious sketches on The Carol Burnett Show.  Here, she played them not for laughs. Under Ritt's direction, she showed definite dramatic acting promise -- promise that would be fulfilled in 1979 when she played a dead soldier's grieving mother in the Vietnam war drama, Friendly Fire.  That was a critically acclaimed made-for-TV movie based on a true story.  If you see that Pete 'n' Tillie is going to be on TV or has made it to DVD, I recommend watching it.  I saw it again recently.  I appreciate Burnett's performance even more now that I'm older -- like her opening dialogue as she heads into Gertrude's party in San Francisco.  Tillie is 33.  She really doesn't want to go to that party.  But, at her age and being single and having friends like hers, she narrates that "...blind dates are a way of life."  Gertrude, wants her to meet Pete (Walter Matthau). 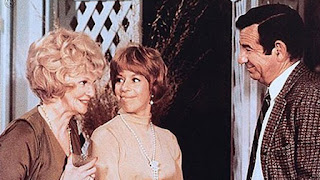 Smart, sarcastic...yet warm and funny Pete.  Watch Burnett's party entrance. Her good acting is so internal it's almost subliminal.  But it's all there in the eyes. You know immediately this is not the Burnett of network sketch comedy.  There's a different look behind the eyes.  A different reaction to situations and people.  Tillie is subdued, low-key but not dull.  This is someone who now conserves her emotional energy to avoid more disappointment.  I told a friend recently that, if I'm in a fix-up situation, I can tell within a minute if the guy's interested in me or not.  It's a skill I've learned from decades of auditions -- walking into rooms with all the right talent but seeing in the eyes of producers that I lacked the hot look they craved.  That's Tillie.  Matthau, with non-stop wisecracks, is the kind of character we'd associate with the older Jack Nicholson.  Think As Good As It Gets but gentler.  Pete surprises Tillie soon after Gertrude's introduction.  Tillie likes the way his mind works.  The way there's no edit button in his brain before words hit his tongue.  It can be maddening but it is refreshingly honest. She doesn't try to top Pete but she can match him.  He likes that.  He also likes that she can handle him.  He gets crude about her conservative attire and carriage: "...don't ever wear a girdle.  I mean, give the rear bumpers a chance...let the merchandise gallop a little."  Crude, yes.  But flattering in a vulgar way.  And, above all, he noticed her.  Besides, she senses the bon mots are his way of dealing with life's humiliations. Burnett and Matthau play off each other like pros in a friendly top tennis match.  They'd work together again. She'd join Walter Matthau and Jack Lemmon in Billy Wilder's 1974 remake of The Front Page. 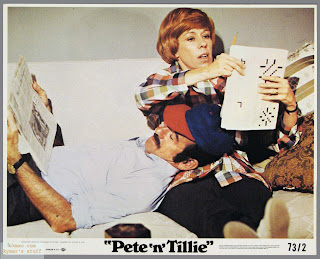 Pete and Tillie wed.  Of course, it's not "happily ever after."  In the marriage section of the movie, there's a scene that got a terrific reaction from the audience when I saw it as a teen.   Pete's having an affair.  The other woman, a total airhead, wants to have lunch with his Mrs. and discuss matters in a civilized way.  Carol Burnett underplays this scene with a Spencer Tracy brilliance.  That young bimbo in the restaurant never knew what hit her.  She's like a salmon jumping out of the water and trying make a deal with a kodiak.  Burnett, the actor, shows that one doesn't have to mug, be broad or do shtick to get a laugh.  You just can commit to your character, be totally in the moment and react honestly, as the character would.  There's another solid scene. Tillie gets bad news about someone's medical condition.  As a kid, I remember thinking that Burnett hardly did anything in that scene.  It didn't look like she was acting.  She seemed to just stand there.  Seeing it now, I realize how excellent she was in the scene.  It didn't seem like acting to me when I was a teen because it was so real.  She was "being," not acting. I got similar news one day in my middle age.  I reacted the same exact way Burnett did as Tillie.  I think the bravery of her serious work in this picture was eclipsed by the popularity of her weekly comedy show.  The castmember who did get big love was Geraldine Page as Gertrude.  This film put Page in the running for the Best Supporting Actress Oscar.  Gertrude is one of those "ladies who lunch." She plans benefits, wears over-sized hats and keeps her age a secret.  As Jimmy says to Tillie and Pete, "Nobody knows how old Gertrude is.  Not even Burt, her husband." 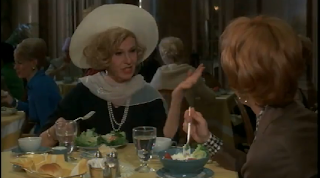 In one scene, shallow Gertrude blames Tillie for being asked proof of age by San Francisco police.  This leads to one of the...BEST...GIRL FIGHTS...EVER...in a Hollywood movie.  Gert takes the first punch.  Just like the bimbo in the restaurant, she discovers that you don't trifle with Tillie.  The two get down and get dirty outside.  I think this smackdown got Page the nomination.  Jimmy is their openly gay friend.  Nowadays, you can't swing a dead cat without hitting six openly gay men in TV shows.  The flamboyant gay male friend or contestant has become a stock TV & film character.  In the early 70's, this was still daring.  Jimmy was rare.  He may seem bitchy at the beginning with his scheme to find out Gertrude's real age, but ultimately there's more depth to him.  He didn't just pop up like a jack-in-the-box with festive one-liners.  Also, he was neither victim nor social deviant.  Thank you, screenwriter Julius Epstein and thank you, actor René Auberjonois. 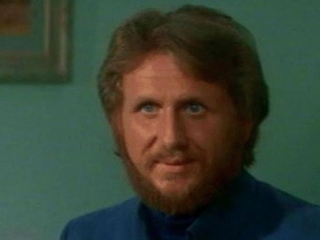 Jimmy's last scene was beautifully written and beautifully played.  Once again, Pete 'n' Tillie is not one of the great Hollywood movies of the 1970s but I feel it's worth a look.  Especially for Carol Burnett's first major dramatic outing.  It's the kind of role that you would've expected a Shirley MacLaine, Ellen Burstyn or Joanne Woodward to play.  Carol Burnett seemed an odd casting choice back then.  But she's very effective.  If you see Pete 'n' Tillie, let me know what you think.  One more thing:  In the first five minutes of the movie, you see Gertrude's black maid open the door.  A priest comes to the party.  The extra playing the maid has no dialogue.  That was 1972.  In 1975, that actress, Isabel Sanford, would join Carol Burnett in CBS comedy stardom.  She was the lead actress on a new CBS sitcom that premiered and became a big hit.  On The Jeffersons, Isabel Sanford would be an Emmy winner for playing the lovable wife, "Weezy" Jefferson.  And "Weezy" had a maid on that classic TV sitcom.
at April 06, 2012