I mentioned in July post ("Some Music From My Youth") that Sundays were groovy music days in our house on 124th and Central Avenue in Los Angeles when I was growing up. Especially on lazy Sunday afternoons in the summer. Mom and Dad would play a variety of albums on our stereo, mostly jazz. One of our favorite vocalists -- I picked up the love from my parents -- was Tony Bennett. We had several of his albums in our family record collection. 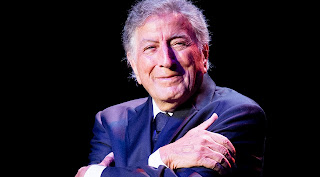 There was one Tony Bennett cut that always got a verbal swoon from Mom when she heard it. I always giggled when she let out that appreciative sigh. She kind of sounded like Olive Oyl in the cartoons when she saw Popeye's muscles. The Tony Bennett cut was his silky rendition of the love song written for the movie, THE SANDPIPER. The movie starred Richard Burton and Elizabeth Taylor. The song is "The Shadow of Your Smile."

"The Shadow of Your Smile" won the Oscar for Best Song of 1965. Personally, I miss the days when songwriters gave us great title tunes and love songs for the movies.

My favorite Tony Bennett album at home was "When Lights Are Low," a jazz LP he did with the Ralph Sharon Trio. Man, I still totally dig that record! I was lucky enough to meet Tony Bennett during my VH1 years. When he showed up in our studio, I wasn't scheduled to interview him but I just had to introduce myself and tell him how I much I loved his album with the Ralph Sharon Trio.  His eyes lit up and he said, "Ralph!" I didn't know it but Mr. Sharon had come to the studio with Tony Bennett. He motioned Ralph Sharon over so I could shake his hand. I was giddy with glee. Then I made Tony Bennett laugh by doing a loving imitation of him in his Hollywood debut. Honestly, the movie laid such an egg that it was both his debut and his farewell film role.  THE OSCAR is one of those deluxe movies that's so bad it's good. Tony played the narrator/former best friend of Frankie Fane, a vain Hollywood star who used everybody he came in touch with so he could win an Oscar. Tony Bennett was Hymie Kelly, the character in that cheese-fest who said "Man, he wanted to swallow Hollywood like a cat with a canary. And he did it!" 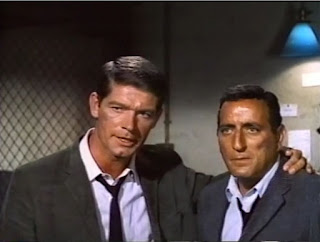 "I've Got Just About Everything" is a swingin' cut from the Tony Bennett LP with Ralph Sharon. Treat your ears. Click onto this link: