I turned on the TV mainly for some background noise. However, I found Olivia de Havilland having a nervous breakdown on a cable channel and I was riveted. Once again. FXM Retro, the Fox classic movie channel, was airing the 1948 drama, THE SNAKE PIT.  I've been staying at my sister's apartment. We have been Olivia de Havilland fans ever since we were kids watching her old movies on local TV at home in Los Angeles. THE SNAKE PIT holds a very special place in our hearts. In it, de Havilland plays a newlywed who discovers that she's in a mental institution. But she cannot recall how she got there. It's a film that led to reforms being made in conditions at mental institutions across the country. The actress allows herself to look frayed and psychologically fractured in this film. She brings you into the character's jumbled and clouded emotions while remaining fully grounded in her character's humanity. Instead of feeling that you're watching a lady go crazy, you feel "Wow, that breakdown could happen to anybody." A moving performance, it shows de Havilland at her best. 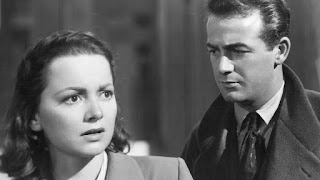 THE SNAKE PIT (1948) was made in between Olivia de Havilland's two wins in the Best Actress Oscar category. Her first was for Paramount's TO EACH HIS OWN (1946) and her second would be for Paramount's THE HEIRESS (1949). 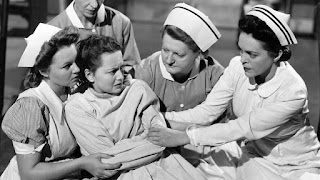 Anatole Litvak directed THE SNAKE PIT. I've seen the movie several times. When I watched it this week on TV, something stood out to me that had not stood out to me in earlier viewings. Modern day Hollywood could have taken a tip from THE SNAKE PIT in the area of good roles for females. And I don't mean just the leading lady role played by de Havilland. Watch this social issue drama and notice the dozens of speaking parts for females. Some are supporting roles done by recognizable faces such as Celeste Holm, Beulah Bondi and Betsy Blair (who went on to give a lovely performance as the shy Clara in 1955's MARTY with Ernest Borgnine.) Many others are bit parts done by actresses you've seen in other films. Actresses who were never stars yet they were always solid, dependable performers. There are plenty of them in THE SNAKE PIT. You get a feeling that director Anatole Litvak was blessed -- all he had to do was give those pros the script, tell them what he needed, leave the rest to their inspiration, sit down and yell "Action!" Here's a trailer.

I wrote "female" because the many roles cover a wide age group. We see Virginia Cunningham (Olivia de Havilland) when she was a little girl faced with a family loss that would effect her emotionally. There's a child actress for those flashback scenes. When we get inside the institution with patients and nurses, we see women who are young like newlywed Virginia, middle-aged women and women in their senior years. THE SNAKE PIT hired dozens of talented females for on-camera duty. They weren't all stars but they sure were good. Here's a clip.