Patti LuPone as a powerful Hollywood wife getting sexually satisfied by a pay-for-play aspiring young actor who glances past her to the Oscars on display that her Hollywood studio boss has won. You just know that the sight of those golden statuettes is what brings him to climax. This is one of many sexual scenes we see in Episodes 2 and 3 of Ryan Murphy's HOLLYWOOD miniseries now available on Netflix. I blogged my feelings for the premiere episode. I love it and I loved its production values. It boasted some fine acting, especially by veterans Patti LuPone and Dylan McDermott. This is Hollywood history a la Murphy. He takes Hollywood facts, does not put them in any particular chronological order and does his own revision on the history, we believe, to make a comment on social issues today within the entertainment industry. In HOLLYWOOD, he mainly gives us a view of how things could have been in the Hollywood of the 1940s and 50s if there had been equal opportunities for people of color and if gay and bisexual men could have been free to be themselves instead of closeted. In the first episode we meet Jack Castello,  a handsome vet home from World War 2. He's married. He wants to be a star. But he's not even getting work as an extra. His wife works as a waitress. He gets recruited by a larger-than-life Hollywood switch-hitter who runs a full service gas station in Hollywood. It's a front for sexual escapades. The gas station attendants are handsome guys who get in the cars with some clients and give them sexual delights for pay. Jack is initially timid about taking the job -- a job which requires him to go off with female and male clients -- but the money is good. He gets caught up with his bills and his first client, a powerful Hollywood wife, could help him get screen test. Jack meets Archie, a handsome young Black man who has written a screenplay. Archie joins the full service gas station crew and drives off with a shy guy named Roy Fitzgerald. But Archie won't take money for his sex with Roy, whose name will be changed to Rock Hudson. He likes Roy. At the end of the first episode, Jack gets in a little trouble with the law. 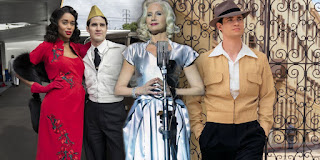 In Episode 2, we meet Hollywood star Anna May Wong. Wong, a Chinese American, was one of the biggest stars of the silent screen era. She worked in the 1930, when films had sound, but she was not as big a star. She wanted the lead female role in MGM's THE GOOD EARTH, based on the Pearl Buck novel of the same name. The studio would not consider her for the role of the poor Chinese wife in the prestigious 1937 production. The role went to white European actress Luise Rainer. Rainer won her second consecutive Oscar for Best Actress. This is all true. Incidentally, MGM would film another story based on a Pearl Buck novel. 1944's DRAGON SEED also had a young Chinese wife as the lead female role. That part went to -- Katharine Hepburn. We meet Ryan Murphy creation, Raymond Ainsley. Played by Darren Criss, he's an aspiring film director at Ace Studios who wants to make a film with Anna May Wong. He comes out about being half-Filipino. Hollywood assumes he's white. His girlfriend is Black. She's Camille Washington, played by Laura Harrier. 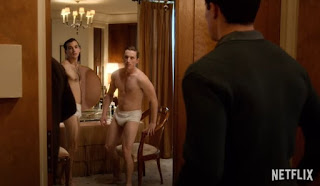 To recap: Jack Castello wants to be a star. Archie wants to sell his screenplay. Raymond wants to direct a film. These guys are having active sex lives. So much so that, instead of HOLLYWOOD, this miniseries could've been called PHALLUS IN WONDERLAND. Mind you, I have nothing against sex and nudity. But, after a while, I did wonder if Murphy really had a focused, sharpened story to tell or if he just wanted to titillate us with the sex and nudity. I still haven't seen Jack display what could be "star quality" or impressive acting talent. Nonetheless, he gets a screen test for TAP ROOTS. That was a 1948 Civil War era drama starring Susan Hayward. Then Roy Fitzgerald, now Rock Hudson, gets an audition for a bit part in a Barbara Stanwyck movie -- 1955's THE VIOLENT MEN (see how Murphy jumps forward and backward in time in the same scene?). Hudson also feels forced to sexually service his slithery, insulting and lascivious gay agent, very well-played by Jim Parsons. And Roy/Rock falls in love with Archie who is now getting so much work at the full service station that his presence is requested by his boss at one of the notorious George Cukor parties. It was Hollywood lore that the famed director had special Sunday brunch poor parties. These parties were special because the guest list was men only and skinny-dipping ensued. His dinner parties, so it goes, also had guests known for active hormones -- such as Tallulah Bankhead and Vivien Leigh. In one scene, we see Bankhead holding court at the dinner table by telling an anecdote about Errol Flynn. What she says is a quote I'd read from Tallulah Bankhead when I was in college in the 1970s. In the original quote, the name was Montgomery Clift, not Errol Flynn. Which makes more sense. The actress who played Vivien Leigh in that scene -- from Episode 3 -- didn't look as much like Vivien Leigh as I do. She came off more like Karen from WILL & GRACE pretending to be Vivien Leigh. This whole sequence seems to be a set-up for more sex. The gas station boy-toys arrive at Cukor's house. Archie is one of them. Noel Coward takes a lusty interest in Archie. Roy/Rock is present too and gets jealous of Noel Coward hitting on his boyfriend.

I'll use Archie as to illustrate my main problem with Episodes 2 and 3. Remember the Billy Wilder classic, SUNSET BLVD? William Holden played the broke, out of work screenwriter, Joe Gilles. Joe had written more than one screenplay. When we first we see him, he's been working on a screenplay at the typewriter. He's got ideas to pitch to a producer at Paramount. It's just that he's broke and he can't get a job. He's so financially desperate that, when he meets Norma Desmond, he hatches an idea to make some fast cash as her script doctor. She's a faded and wealthy Hollywood star. Joe winds up becoming the kept man of an older woman/former silent screen star.

Archie is a young Black man in late 1940s Hollywood who has written a screenplay. Why isn't he working on another one? Why isn't he jotting down ideas? Does he have any other written work or ideas to pitch? He's paying more attention to sex than to his craft. A Black person at that time -- even now -- would have to work twice as hard as white talent to get half the attention. Archie needs more than one script idea to offer. There's a lot of talk about wanting to be "a star" in those three episodes. None of these young hopefuls talk about wanting to be a professional first ...and if stardom happens, it happens. The one who seems to be putting the most work into her acting is Camille. Unfortunately, she's restricted in bit parts as maids -- and the Hollywood power men want her to play the parts in an exaggerated style with a stereotypical speech pattern. She could not say, "I'll get the door for you, Miss." She'd have to make big eyes and say "I'll git de do' for you, Miss." This is what Hollywood did to Black actors in the 30s and 40s. Let's see if Camille can break through the way Dorothy Dandridge did in the 1950s.

Just like in the premiere episode, the performances in episodes 2 and 3 that stood out to me the most were the ones delivered by veterans -- Patti LuPone, Dylan McDermott and Holland Taylor.  A big round of applause goes to Michelle Krusiec as the proud, elegant and disappointed Anna May Wong. She's excellent. Click onto the link below to see a trailer:

As far as the gay male aspect, I wish Ryan Murphy had taken a less traditional, less "West Hollywood" approach. I wish he'd given us something based on a fresh story. Ever heard of 1940s actor William Eythe? He was a handsome and talented actor at 20th Century Fox who probably got scripts that Tyrone Power wasn't able to do. Eythe was very good in THE OX-BOW INCIDENT with Henry Fonda and A ROYAL SCANDAL with Tallulah Bankhead. My favorite performance of his comes in THE SONG OF BERNADETTE opposite Jennifer Jones. Jones won the Oscar for Best Actress of 1943 for her work in it. She played the peasant French girl who had visions of the Immaculate Conception, joined a convent, died young and was later canonized by the Catholic Church at St. Bernadette of Lourdes. Eythe played the poor fellow villager who loves her yet realizes she's meant for something greater than a life in their village. William Eythe was gay and the love of his life was another popular actor on the Fox lot. The studio arranged for Eythe to be seen on dates with actresses and eventually maneuvered him into an arranged marriage of convenience. Eythe drank. By 1950, he got a divorce, quit films and lived the rest of his life with the man he loved.

Something like that might have had more weight than the George Cukor boys-only pool parties. In my opinion. Let's see what the other episodes bring.
at May 16, 2020