Now that another Black History Month is coming to a close, I want to highlight some Hollywood history that was made just a few years ago. This week, three years ago at the Academy Awards, it was announced that LA LA LAND MOONLIGHT was the true Oscar winner for Best Picture of 2016.

You remember the moment that caused a nationwide gasp amongst film fans who watch the annual awards telecast. Barry Jenkins, a black filmmaker and writer, had directed a passionate, lyrical independent feature about growing up black and gay. Jenkins directed Mahershala Ali to an Oscar win for Best Supporting Actor for his performance as the imperfect, tough streetwise man who becomes gentle, compassionate father figure. 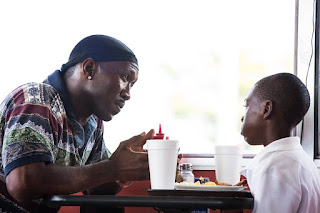 Barry Jenkins and his friend/writing partner Tarell Alvin McCraney won Oscars for their screenplay. To me, there was something richly symbolic for Black History Month in the ultimate surprise announcement that MOONLIGHT was the Best Picture Oscar winner instead of the, if you will, privileged Hollywood favorite, LA LA LAND.

LA LA LAND, a modern-day original movie musical, made young director/writer Damien Chazelle the new "It" show biz sensation. The reviews from mostly Caucasian critics were like love letters.  Being that I'm a hardcore lover of movie musicals, a love that began when when I saw a Fred Astaire RKO musical on local TV when I was in elementary school, I was eager to see this LA LA LAND. Chazelle was getting mentions and interview time on network morning show.  Cable's TCM (Turner Classic Movies) even had Damien Chazelle as a guest programmer one night with host Ben Mankiewicz. Chazelle introduced four classic films that he selected. He, of course, also chatted about his romantic musical, LA LA LAND. This was during a period in which African American guests hosts had become scarce on TCM. Not like the heyday of the late Robert Osborne's always racially inclusive reign as the sole host on the cable channel. Chazelle is white. At that time, there was no black representation in the line-up of hosts. Today, there is.

While LA LA LAND and director Damien Chazelle were basking in the love from critics, network TV programs and social media, I noticed another filmmaker getting attention and great praise from black folks on Twitter. Black Twitter was tweeting about a new indie film from Barry Jenkins who, like the LA LA LAND director, was also in his 30s and a filmmaker. I read from Black Twitter that a film called MOONLIGHT touched beautifully on the black gay male experience. But LA LA LAND was getting all the attention at that time.  MOONLIGHT, like many of us black people, had to work twice as hard to get half as much notice. Black History Month was born to champion history that was often overlooked and ignored by mainstream America. Some factions even tried to erase our history. Barry Jenkins was making history with MOONLIGHT and its history was, at first, being overlooked. 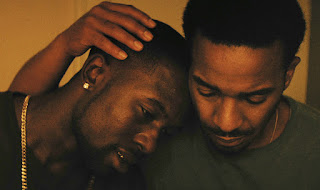 Then the buzz for Barry's film began to build. Jenkins, like Chazelle, is a fan of classic films. Especially classic foreign films. Jenkins' MOONLIGHT never got a mention on TCM like LA LA LAND starring Ryan Gosling and Emma Stone did. 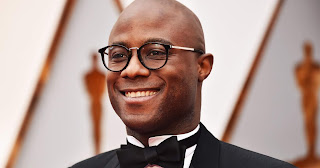 Then came the Big Backstage Mistake on Oscar night. A Hollywood cheer went up went up when Faye Dunaway with Warren Beatty announced LA LA LAND as the Best Picture Oscar winner. As the LA LA LAND posse rushed onstage to make a victorious speech, it was discovered that something had gone hugely wrong. Dunaway and Beatty made a mistake -- but it was not their fault. The male representative from PricewaterhouseCoopers LLC had not been focused on doing his one job. His job was to safeguard the case containing envelopes with winners' names and give envelopes to the correct people to open onstage. Instead of paying attention to his one critical job, he was busy live-tweeting his backstage encounters with the stars. He handed a star the wrong envelope. This proved that live-tweeting is in the same lane as texting while driving. When you're live-tweeting a show or texting while driving, you are not giving your full attention to what's in progress before you.