If you have not seen the short animated feature called HAIR LOVE, a few minutes of gorgeous joy are missing from your life. When I first saw it last year, I thought "This has GOT to win an Oscar." Matthew A. Cherry has given us lovely valentine to African American fatherhood and daughters. Thank you, Matthew Cherry. 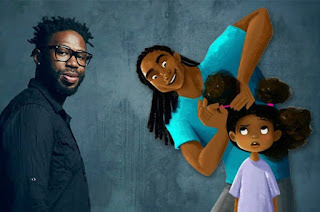 Do yourself a favor now and watch HAIR LOVE from Sony Pictures Animation.

There was a movie back in 2015 that most folks ignored at the box office. It had no special effects. No caped superheroes. No car chases. Just average Southern California people dealing with loss, heartbreak, social class and race. Black and white folks. And they're related. This movie starred Kevin Costner and Octavia Spencer. We see Octavia after she won a Best Supporting Actress Oscar for THE HELP and before she and Costner were reunited for HIDDEN FIGURES.

The first film Kevin Costner and Octavia Spencer made together was 2015's BLACK OR WHITE. At the end, I found myself wishing that someone would come up with a quality script that would have Costner and Spencer as a married couple. Those two actors hit a cool groove together onscreen in BLACK OR WHITE. The movie is not bad. It's satisfactory. Their chemistry, however, is above average and kept me watching. Watch this trailer and you will see why I feel Kevin Costner's character needed to see HAIR LOVE.

There you have it. Kevin Costner and Octavia Spencer were giving us MIXED-ish years before MIXED-ish became an ABC sitcom. Have a good day -- and take care of the hair. 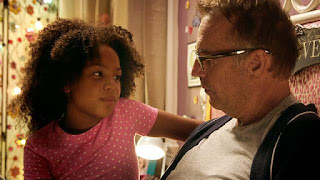