This post is, in a way, a bookend to my previous one. The post previous one is about the groundbreaking African American playwright and screenwriter, Lorraine Hansberry. Hansberry, a Civil Rights activist and a lesbian, wrote the 1961 screenplay adaptation of her hit play. For a black person, especially a black woman, to get an onscreen card in the opening credits that had her name -- and her name alone -- under the words "Screen Play By" was a huge and historic achievement in a production from a top Hollywood studio. This weekend, I saw the 2019 drama QUEEN & SLIM, released by Universal. The credits roll at the end of the movie. There is a single card onscreen that reads "Screenplay By Lena Waithe." Another huge achievement from another talented black lesbian writer in a production from a top Hollywood studio. QUEEN & SLIM was directed by Melina Matsoukas. What an impressive job she did. QUEEN & SLIM is her first feature-length film.

Someone might describe this as a "Black Lives Matter" movie, but it's more than that. BOYZ N THE HOOD, the 1991 classic from director John Singleton took place in the modern-day South Central Los Angeles, where I grew up. Nonetheless, at its heart, BOYZ N THE HOOD is a modern-day equivalent of a classic John Ford western -- a western like THE MAN WHO SHOT LIBERTY VALANCE.  In QUEEN & SLIM, we meet two young African American adults on an achingly innocent first date in a diner. As he escorts her home, they're pulled over by a white cop. Slim is a responsible young man. Almost pleasantly boring. He doesn't drink. There's no drug substance in his car. No weapon. Just a pocketknife in the glove compartment. Queen, by the way, is a lawyer. The cop gets increasingly aggressive as he questions Slim and orders him out of the car. The situation turns ugly. The cop ignores Queen who identifies herself as an attorney and requests his badge number and name. Things get uglier. Two shots are fired. She's wounded. The cop is dead. This is a first date that would make folks swear off Tinder forever. 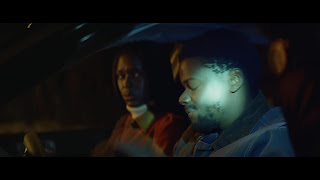 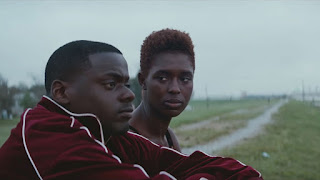 The two black characters must flee and this becomes a road movie. On the road from Ohio to Florida, they will find family dysfunction, violence, disappointment, support and love. They will discover things about themselves and each other. This story could've been a classic western with a more psychological depth than the standard old Hollywood westerns. Think of William Wellman's THE OX-BOW INCIDENT, Fred Zinnemann's HIGH NOON and Martin Ritt's HOMBRE.  It could've also been a film set in an earlier decade while also being an ode to a certain genre -- like Arthur Penn's BONNIE AND CLYDE in 1967. Penn's hit film about two real-life Depression-era outlaws was a Warner Bros. release. In the 1930s, Warner Bros. was the king studio for gangster movies and other "crime doesn't pay" stories. James Cagney, Edward G. Robinson and Humphrey Bogart all had machine gun duty in some 1930s Depression era films from Warner Bros.  Lena Waithe's screenplay is tough, tender, smart, relevant and, at times, funny. The direction is economical and intelligent. Two young black people are on the run in a car. They feel hunted and trapped. Yet notice how often they appear to be free. Theirs is often the only vehicle on the road -- the long, long road. Melina Matsoukas doesn't fill the frame with excess. She lets space exist around people and between people. 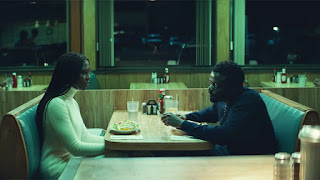 The opening scene is one of wit and revelation. Queen and Slim sit facing each other at a diner table. They've just received their orders. She makes an exasperated face as he folds his hand and says a rather long silent grace before his meal. She claims to be an atheist. We learn that Tinder brought them together. She's understandably a bit tense and critical because of work. A client of hers was executed. She abhors the death penalty. She points out to him that he ordered scrambled eggs but got them over easy instead. She wants the waitress to correct it. He casually lets it go because he's acquainted with the waitress. He knows she's working hard to raise four kids and has an alcoholic husband. He likes the diner because he supports black-owned businesses. Queen and Slim are played by Jodie Turner-Smith and (from GET OUT) Daniel Kaluuya. Here's a trailer.
Flea, the Red Hot Chili Peppers band member, has a supporting role in this film. He's very good as a sympathetic friend to the pair on the run. He was also very good as the homophobic and verbally abusive gay conversion therapy staff member in the 2018 film, BOY ERASED. As for Waithe's screenwriting wit, there's one scene that really broke me up. The two are early in their getaway journey. They stop at a fast food joint and give a mouthy little boy some cash so he'll buy them some food. He can keep the change. A minor accident occurs. It's a scene that adds another bite of racial significance to the story while also giving you a flavor of BONNIE AND CLYDE meets SANFORD AND SON. 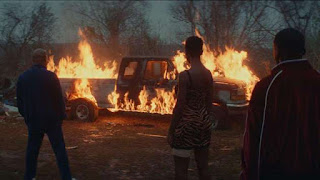