As a longtime classic film enthusiast, you could find me in a state of pure rapture if I was in my humble studio apartment back in Manhattan watching a Criterion Collection DVD. I didn't just watch the classic film. I'd watch the film and then play it again. The second viewing would be with the commentary audio up -- if there was a commentary. When I reviewed the 2012 Oscar winning film, ARGO, a Criterion Collection commentary had increased my classic film knowledge. I made a point that ARGO, like the 1936 screwball comedy MY MAN GODFREY, had a theme of responsibility to others running through it. I was in San Francisco recently, visiting my best friend, and he clicked onto his Criterion account to browse for a film we might watch. As he scrolled, I noticed a familiar face. Mia Mask has being a film professor at Vassar in her credits. This African American woman knows her stuff. I'm a witness because she and I auditioned together for a project back in 2012. She auditioned to be my partner on a film review/interview show being pitched to some prestigious TV outlets. This would've been a breakthrough program -- film reviews done on a weekly TV show by two black film critics. Something you never saw on TV in the 20th Century, it would've been novel for the new 21st Century too. Unfortunately, the show did not get picked up after 5 years of being pitched. I was thrilled to see Mia Mask on Criterion. She gave commentary on the Fred Astaire and Ginger Rogers classic 1936 musical, SWING TIME. 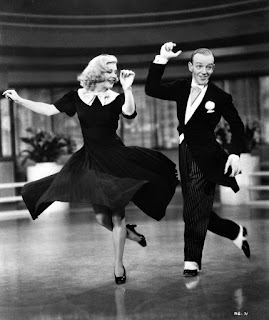 She talked specifically about Astaire's homage to his dance idol, Bill "Bojangles" Robinson in the film's "Bojangles of Harlem" number.  The number was done, technically, in blackface but not the severe blackface seen in Al Jolson numbers. There was no coarse wig, no exaggerated white lips and Astaire's make-up was not coal black. Mia, in another commentary, discussed the significance of Sidney Poitier.

Here's the question I have. I don't subscribe to Criterion and I have not heard many of the recent commentaries. Perhaps you've heard more than I have. Does Criterion have black guests giving commentaries on films by Charles Chaplin, Ernst Lubitsch, William Wyler, George Cukor, Billy Wilder, Welles, Lean, Fellini and De Sica? Or do black contributors just get invited to talk about black images, black stars and black filmmakers? 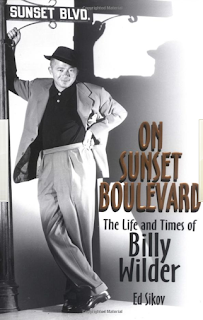 I'd like to see us African American classic film enthusiasts entered into a wider discussion. A dear buddy of mine, Ed Sikov, has written several books about films. He wrote a terrific book about Billy Wilder (above pic). Ed also did commentary on a DVD of Wilder's SUNSET BLVD. Ed and I grabbed a bite one night and I remarked about the auto madness the drives action in the movie. You have three characters brought together and each one driven to a moment of irresponsibility because of a car. Broke screenwriter Joe Gillis speeds off in his car to dodge bill collectors who want to repossess it. He hides his car in Norma's garage. Max tells us the stunningly co-dependent reason why he's Norma Desmond's chauffeur. Faded film star Norma Desmond goes  crazy when the realizes that the Hollywood studio where she once reigned wanted to see her, not for a film role, but to borrow her antique car for a Bing Crosby movie being shot. 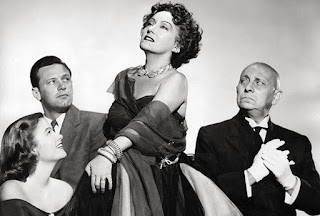 Would I be invited to make that observation in a commentary?

The 1939 western, DESTRY RIDES AGAIN, makes it to Criterion this spring. Starring James Stewart, it has similarities to his other 1939 classic, Frank Capra's MR. SMITH GOES TO WASHINGTON. Deputy Tom Destry and Senator Jefferson Smith are young men, new at their jobs and determined to do the right thing as a public servant. Both have to confront a corrupt politician. Both had good fathers who were shot in the back and killed.  Are black contributors invited to make a commentary observation such as that?

TOOTSIE is in the Criterion Collection. I attended the 1982 critics screening of that Sydney Pollack classic in New York City and, early in my TV career, got some of my first national exposure when my interviews of cast members aired. Here's some TOOTSIE trivia:  Suzanne Somers was eager to play the part Jessica Lange did. Somers felt the role would distance her from her TV sitcom image on THREE'S COMPANY. In the first 10 minutes of the movie, Dustin Hoffman as Michael Dorsey plays piano at his surprise birthday party. The tune he plays is a song he co-wrote with Bette Midler called "Shoot the Breeze." Hoffman and Midler performed it on her 1977 NBC music variety special. Hoffman told me he wanted it to be the love song for TOOTSIE. Director Pollack nixed the idea and went with "It Might Be You" sung by Stephen Bishop. In the party scene on the terrace where Michael Dorsey flirts with soap star Julie Nichols and she throws her drink in his face -- well, Jessica Lange did that in real life, she told me. She did it to … Bob Fosse. 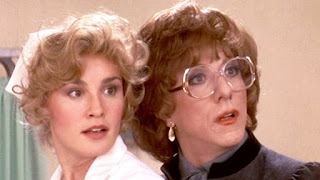 It seems as though white contributors talking about films on TV or in commentaries are considered to discuss, say, Elia Kazan's A TREE GROWS IN BROOKLYN, Terrence Malick's TREE OF LIFE and Gordon Parks' THE LEARNING TREE. We black folks are only tapped to talk about THE LEARNING TREE, written and directed by a black filmmaker.  Time to change that, don't you think?

By the way, I scrolled down the Criterion website today -- and I was extremely honored. A bit of my work is on it. I'm in the 2010 Stephen Soderbergh documentary about the late Spalding Gray titled AND EVERYTHING IS GOING FINE. When I got a call from Soderbergh's office asking for permission to use a clip from my VH1 talk show interview of Spalding Gray, I thought I was being pranked by one of my friends. I'm proud to say it was no prank.

Check out the collection yourself. Here's the website:  Criterion.com.
at February 22, 2020