I told myself that I wouldn't, but I watched anyway. I grew up in a house with parents who urged me to pay attention to current events. That included watching the State of the Union address -- even when the president represented the opposite party. Mom and Dad were Democrats. I am too. Last night, I was a livid American as I watched. 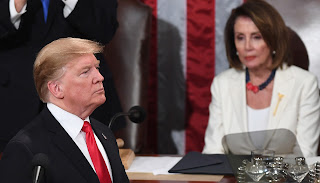 To see a Presidential Medal of Freedom be bestowed upon radio talk show host, Rush Limbaugh, was an insult to Lady Liberty. There are audio clips of him making racist comments on his show, making racially offensive comments about Barack Obama and Mexicans and mocking the physically disabled actor, Michael J. Fox. And there's more. Furthermore, I can't take any more of Sen. Mitch McConnell praising and supporting the millionaire former reality TV game show host currently living in the White House. I was on summer vacation from school decades ago and watched President Nixon resign on live network television. The shadiness of this current administration, its abuse of power, makes Nixon's seem like Tracy Flick's high school election campaign in the 1999 satire, ELECTION.

All those politicians on the Hill who are in the Cult of the Orange One -- and the Orange One himself -- make me feel like the 1930s private investigator J.J. Gittes in CHINATOWN when he grills the wealthy and corrupt California businessman Noah Cross with "Why are you doing it? What can you buy that you couldn't already afford?"