Spike Lee is one of America's most popular, most productive and most socially relevant American directors. He's praised and respected here in America and overseas. That does not mean, however, that he's always received equal opportunities in his homeland or gotten the awards recognition that he should have. This year, after 30 years of work, he finally received an Oscar nomination for Best Director. He didn't win Best Director but he did win for his other nomination -- in the Best Screenplay category for BLACKkKLANSMAN.  One of my jump for joy moments as I watched the Oscars a couple of months ago was when Spike won his Oscar. At last! 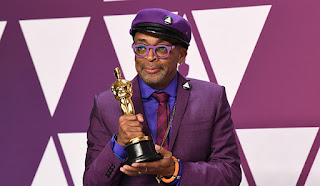 I've had the pleasure to talk to Spike Lee on TV a few times.  The first time was on my VH1 show in 1988. Spike was coming in to talk about his new release, SCHOOL DAZE, and I also wanted to ask him about his popular film before that, SHE'S GOTTA HAVE IT.

Spike was scheduled to be at our studio on E. 28th at 2nd in Manhattan at 2:00. He'd have time to get some make-up and then sit down for our interview.  Whenever a guest needed one, our studio manager always sent a visibly numbered car service town car to pick up guests. We also gave them the number of the car. Spike lives in Brooklyn. She sent a car to his address to bring him into Manhattan to our studio for the show. Well, about 2:15, Spike had yet to arrive for the taping. Close to 2:25, he came bounding through the door, huffing and puffing and apologetic. We asked if something had happened en route or was the car late. No, the car wasn't late. It had arrived about 1:30. But something did sort of happen en route -- or lack of en route, as it were.

Spike said that the driver would let him into the car. Spike had ID and the number of the car. It got the to point where he had no more time to argue with the driver because he did not want to be late for our taping. So he made a dash to the nearest subway station and caught a train to our location.

The usually cool temper of our Irish Catholic studio manager hit a boiling point and she immediately called the car service company. She got the supervisor, the supervisor contacted the driver -- and the driver admitted to the supervisor that he would not let the short black man wearing glasses into the car.  The driver's order was to pick up "Film Director Spike Lee."

The white driver said to the supervisor, "He did not look like a film director."

The driver was ordered to report back to the main office. When he did, he was fired.

Spike, a true gent, didn't need to apologize to us. We apologized to him. During the interview, I asked if he was working on a new project. Spike replied that he'd just started shooting a new film called ... DO THE RIGHT THING. 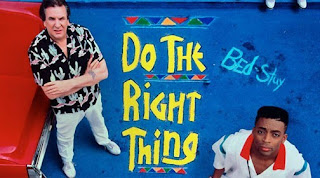 1989's DO THE RIGHT THING was hailed here and overseas. It is now considered a classic. It got two Oscar nominations -- Danny Aiello for Best Supporting Actor and Spike Lee for Best Original Screenplay.

If you're in Hollywood for the TCM (Turner Classic Movies) Film Festival now underway, DO THE RIGHT THING screens Friday night, April 12th, at the TCL Chinese Theatre.  One of the things I loved most about the late TCM host, Robert Osborne, was his frequent invitations to artists of color to join him as Guest Programmers to select and co-host four classics they loved.  Spike was a Guest Programmer. He talked about Billy Wilder and how Charles Laughton's black and white thriller, THE NIGHT OF THE HUNTER, inspired him in coming up with the rings worn by DO THE RIGHT THING character, Radio Raheem. 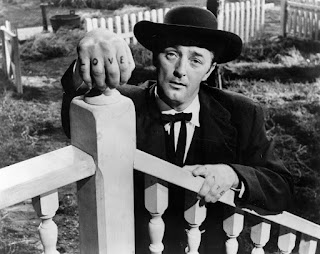 This didn't come up in Spike's Guest Programmer segments, but Spike said that the Rosie Perez dance during the opening credits of DO THE RIGHT THING was inspired by Ann-Margret's famous blue screen musical open to 1963's BYE BYE BIRDIE. He loved that opening credits sequence Ann-Margret did.

If you have 6 minutes free, here's a video of my tips and notes on a few TCM Film Festival features. There's some Black History that deserves to be mentioned.