Enjoy THE DEATH OF STALIN

This is a 2017 feature that I found airing on cable last weekend. I was not familiar with it, but I wanted to see if it was a documentary or a drama played out by actors. It is not a documentary. It is played out by actors. However, I was not prepared to get belly laughs from it. Who would with that title? Remember the dark comedy of Stanley Kubrick's DR. STRANGELOVE? This feature has that same kind of vibe. It is about the death of Stalin, his funeral and the grab for power after the Russian dictator's death in 1953.  THE DEATH OF STALIN provides a buffet of scenes that are just so wrong that they're right. This movie is a must-see for Steve Buscemi fans. Why? Because...are you sitting down? Steve Buscemi stars as Nikita Khrushchev. Yes, Steve FARGO Buscemi. No, he does not attempt a Russian accent. He sounds just like he always does which broke me up laughing. In fact, just about no one attempts a Russian accent in this political satire. The American actors sound American and the English actors sound like they all fell out a British crime thriller that had Michael Caine in a special guest role. If you write a lead movie character whose philosophy is this: "When the Lord closes a door, he opens a window. When he closes a door and closes a window, he turns on the gas," there is no better actor to play that hangdog character than Steve Buscemi. THE DEATH OF STALIN is funny and frightening. 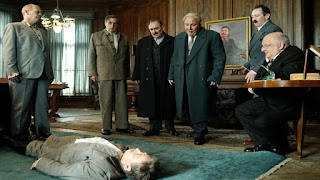 These men are petty, jealous and dangerous. Dangerous because they're top political figures hungry for power and control. Nikita is tightly-wound, constantly frustrated and bellowing lines like "What the barreling f**k are you talking about"? while one official turns to another asks "Are you wearing a corset?"  The annoying Russian official wearing a corset is played by Jeffrey Tambor. 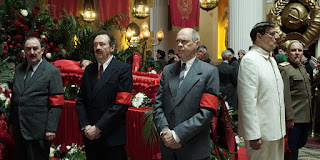 He's a major drain as he poses for new photographs and wants more highlights on his cheekbones. His photo session reminded me of many years ago when I was new in my TV career. I did a movie junket interview of macho man director Oliver Stone in the 1980s.

Marlene Dietrich making 1934's THE SCARLET EMPRESS for Paramount Pictures in Hollywood did not fuss over her lighting half as much as Oliver Stone did for that 6-minute press junket interview of mine -- and, of the two of us on-camera, he was the butch heterosexual.

Here's a trailer for THE DEATH OF STALIN.

Twenty minutes into this biting and brisk satire, it made me think of VEEP, the Julia Louis-Dreyfus political comedy series on HBO, and a 2009 indie comedy I loved called IN THE LOOP.  That political satire starred James Gandolfini and Steve Coogan.